I’m going to blog my upgrade project where I’m adding the 800W water cooled spindle from G-Penny. This spindle is a little larger than the standard 80W spindle (per the manufacturer quote)

The spindle size 65x195mm, longer than the average 800w spindle. Spindle torque is greater than the other brands. Quality is very good. Also the spindle is 4 bearings. Usually 800w just have 2 or 3 bearings.So you can use long time.

The dimensions of the spindle are 195mm x 65mm so it fits into the Makita insert and standard mount. I did a weight comparison to the Dewalt

So it’s 1.83 times as heavy as the stock Dewalt router. Some of you guys expressed interest if it’d work with the stock Shapeoko without the HDZ and that seems too heavy to me. I have the HDZ so I’m not worried about the extra weight especially since I see guys putting 2.2KW monsters on theirs.

So other than that I’ve just taken the stock drag chains off the machine and getting ready to put the 40x15 mm drag chains on the machine but need to add new aluminum pieces to support it first. I’ll add pics of that when I’m done with that step.

Anyway I’m retired so this will be a slow pace project that I work on when the weather cooperates and I feel like it. So don’t get impatient. LOL

I intend to use a 1/8 x 1" x 1" aluminum angle to support the larger drag chains. I looked at channel stock but felt it would just collect debris so I elected this technique. Here is the dry fit; I still have some shaping on the aluminum to go but I wanted to see how it fit 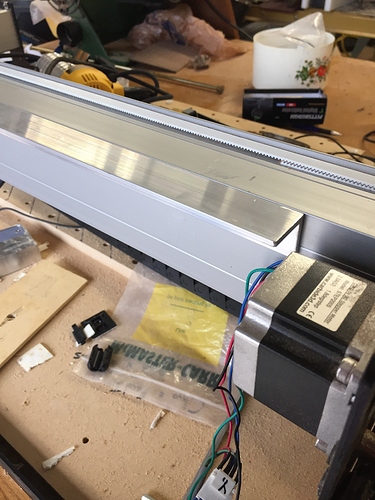 And the new drag chain on clamped on top of it. 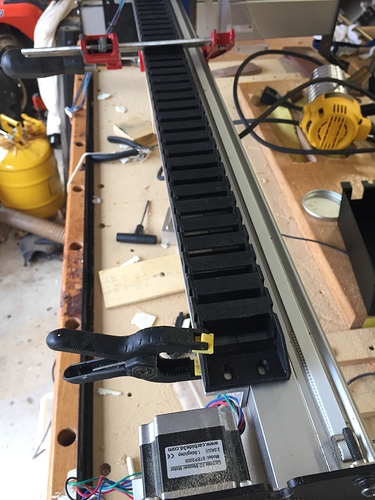 My only words of advice so far: When buying drag chains look to see if they open or not. Mine don’t open like the stock chains did but I don’t think that’ll be a huge problem for me.

X-Rail Drag Chain Extender attached. I drilled and tapped the extrusion for 4mm screws. Time for a nap. 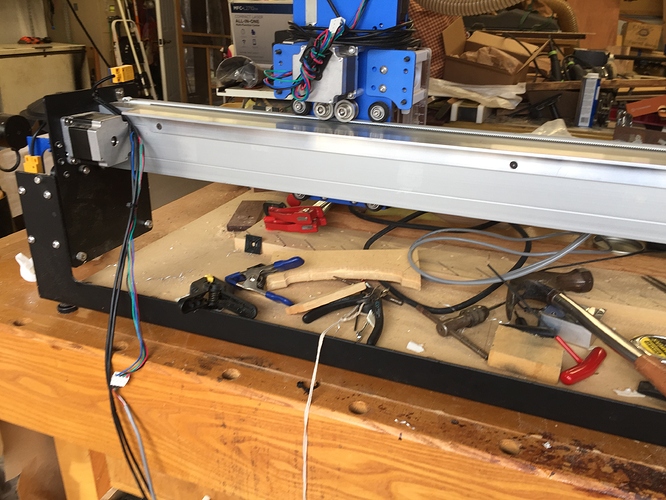 I have to redo the drag chain bracket on the HDZ. The new chain wanted a gentler bend and the bracket needed to be longer. So I’m fabricating one out of 1/8 x 3/4 aluminum. I still need to drill and tap the holes for the drag chain. 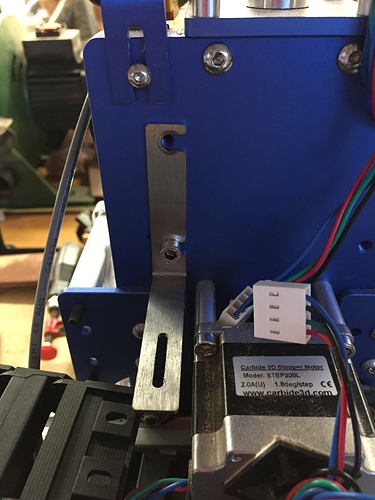 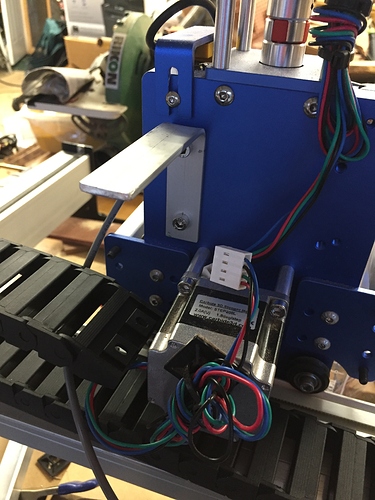 That’s all for today. Anybody know how to make it blue?

there’s youtube videos of anodizing at home but… chemicals

Looks great Gary. Adding angle iron is exactly what I did as well for the Drag Chains. I also used some zip ties along the first link that really work well to keep the drag chain from lifting. 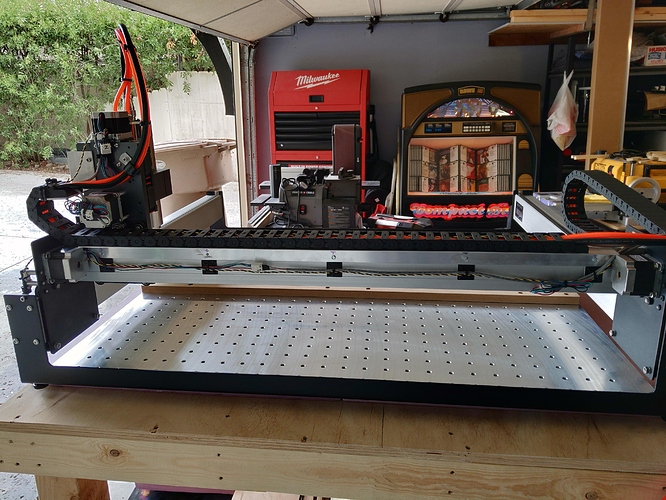 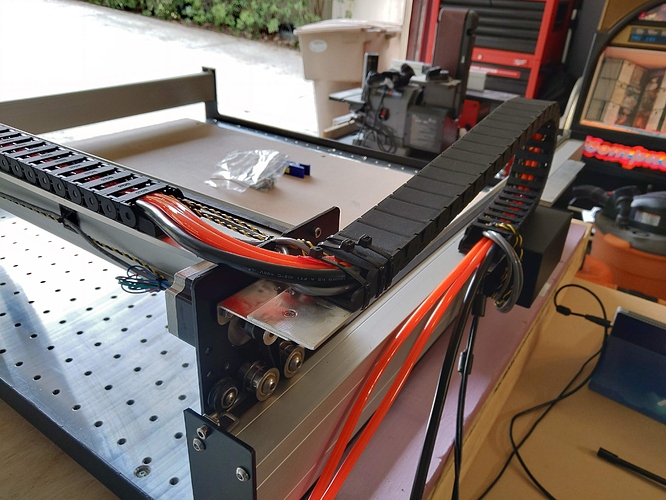 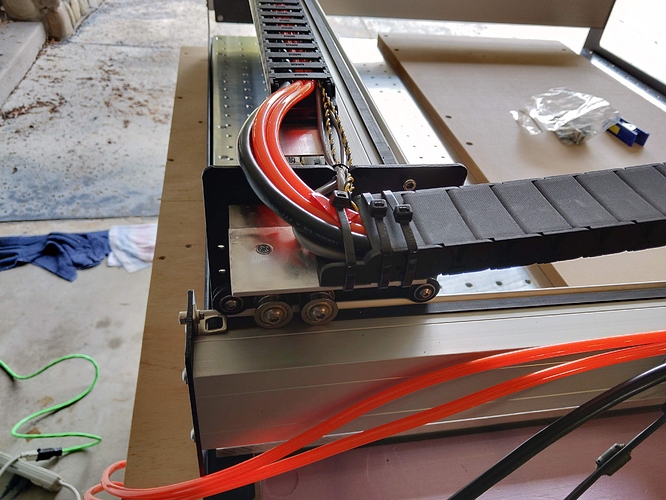 fwiw https://www.etsy.com/listing/721760110/x-axis-drag-chain-brackets-for-shapeoko has been nice for me but I’m not (yet) able to bend metal to my will

I’m going to blog my upgrade project where I’m adding the 800W water cooled spindle from G-Penny. This spindle is a little larger than the standard 80W spindle (per the manufacturer quote)

I think it’s awesome that you’re doing this - thank you!

The added weight suggests that it may really be able to provide 800 Watts of cutting power (more than twice that of the Dewalt). Did you get any specifications or performance curves for it? Maybe take and post a picture of its label? I think that properly sized stiffer Z axis spindle lift springs (if available) should make it fully compatible with stock Shapeokos.

Did you get any specifications or performance curves for it?

Is Torque what you’re looking for? Oh, the important spec is ‘it’s blue’ LOL 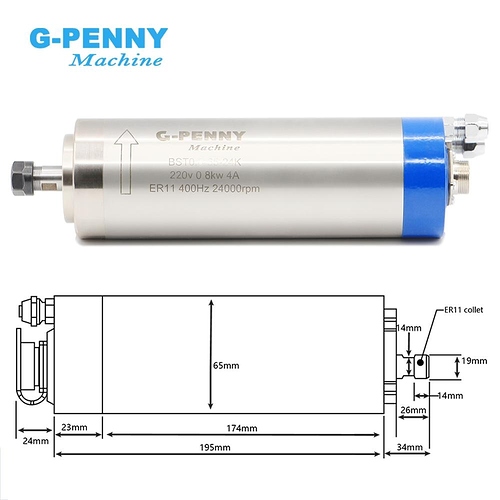 Is Torque what you’re looking for? Oh, the important spec is ‘it’s blue’ LOL

@Julien verified that the runout on his 2200 Watt version was as advertised too! The calculated maximum torque for that 2200 Watt unit matches that of the “2500 Watt” Jianken in the linked video. IMO the 800 Watt 110 Volt version would be a great spindle upgrade for US Shapeoko users at a fraction of the cost of European spindles. 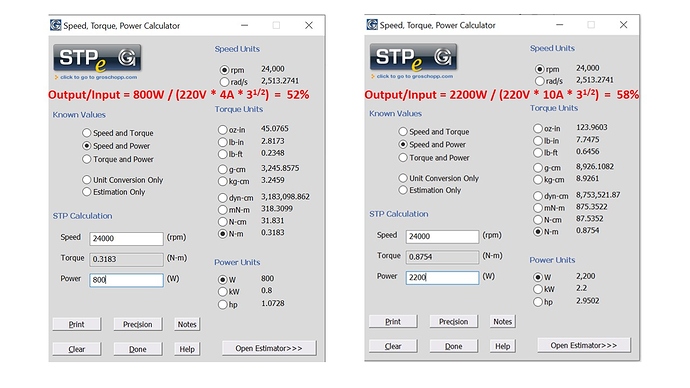 G-Penny 800 and 2200 Watt1280×720 132 KB
Festool fans and others with deep pockets might prefer a Mechatron spindle. “The price for our spindle HFP-6508-60-ER11 is 2358€ and the delivery time is approximately about 2 weeks.” But it’s capable of at least 700 Watts of continuous cutting power from 22 - 60 kHz! So, it would be really nice for high speed aluminum milling (@Vince.Fab). Larger units with and without ATC are also available.

2020-01-02 Update: Mechatron also offers constant torque type spindles in both their professional and standard series. A 800 Watt 24,000 RPM constant torque spindle (like @wb9tpg’s) would only provide 400 Watts at 12,000 RPM (and hence half the material removal rate (MRR) at that speed). But limiting spindle torque limits machine forces - that’s a good thing for safety, performance, and machine protection. Those with monster spindles (like @Julien) might even want to consider limiting their torques to “safer” levels with their VFDs. Note that, unlike HF spindles, routers don’t try to limit torque when cutting loads increases. Their stall torques can be as high as 10 times their operating torque. Those who have crashed their routers know how much damage that can do!

Note that the specified maximum fluid temperatures for their liquid cooled spindles is 35C. Do you plan on using a CW-3000 or CW-5000 for cooling?

Note that the specified maximum fluid temperatures for their liquid cooled spindles is 35C. Do you plan on using a CW-3000 or CW-5000 for cooling?

No; I have a PC Cooler I’m going to try. I’m starting with a smaller reservoir and will upgrade as I see the need to. I’m in a holding pattern waiting on the spindle power cable which is due early next week

I have HF 800 watt 110v, can’t believe how quiet it is. It’s not installed yet, still trying to figure out the water situation.

I will be interested to see how you wire it up to the controller.

LOL - the VFD to spindle power cable I ordered came today. It’s doesn’t fit and the pinout looks like it’s different. I’ve messaged by cable supplier and we’ll see how that goes.

No suitable cable came with the spindle and/or VFD?

Nope - they just supplied a connector which fits. It looks like there is some variation in the 4 pin connectors across the 800W to the larger spindles.

Not only is the connector a different size; the pinout is different.

I’m wondering if I can get a connector like they use on the larger spindle and change the connector on the spindle myself.

If you have a connector that fits, why not just use four wire cable and solder (assuming solder vs screw) to the connector. VFD connection is bare wire to screw connection…

The 16/4 cable assembly I purchased already has an end soldered on it. Even if I took it off; the cable itself not fit into the new smaller connector body. Plus the solder cups in the new connector won’t accept 16 ga wire.

So I’m looking around for 18/4 shielded cable with a drain wire. I’m going to verify 18 ga fits into the solder cups before ordering the cable.

Just curious and 16g would be big. And unusable if connector is smaller than wire. 18g is fine, if it fits…

Ouch, 75 ft minimum? Have you checked with any local suppliers? I’ve even seen some shielded at orange or blue big box…

Going to take a look at that stuff at HomeDepot tomorrow. I want something with 600V insulation rating if I can get it.