GWizard is on sale again, so I checked out the latest version. My impressions are:
It’s CADCAM function would be nice if it worked. Adjusting for machine rigidity would be nice if that worked. Being able to select “Alloys” in material “Families” would be nice if it made a difference. Knowing what criteria it uses to “optimize” cutting parameters would be nice, especially since it’s frequently wrong. I’m not trying to “stir the pot” or upset anyone, I just don’t understand it’s apparent popularity.

That’s a really enthusiastic review, are you sponsored by GWizard?

Should be I guess - it’s the most positive review I could give! Maybe he’ll fix some of it.

Well I’m not knocking it, it’s clear, concise and pretty much the TLDR.

I bought it on sale, a while back. So here’s my take FWIW. I don’t use any of it’s fine/rough slider nonsense, but the ability to import my tool list direct from fusion it’s kinda nice. Its rigidity correction is crap(for an SO3), and the whole CAD/CAM tab is somewhat confusing most of the time.

I do however like it as a F/S calculator. It’s quicker to manipulate and cleaner than Fusion, and I much prefer it to an Excel interface. I was using a modified NYCNC spreadsheet in the past and that was all function and no form (pun intended). So is it worth $150 for a S/F calculator… that’s tough to say.
It works well for what I use it for, and I’m not displeased with my purchase by any means. But then again you could just use Excel for free. So what you’re really paying for is the convenience of the UI and future support/updates. So would I buy it again, yes. Do I think it’s worth the price, ehhh probably not, It’s a splurge buy. Do I think its bells and whistles are worth it, no.

EDIT: This assumes that you have a good enough understanding of S/F to know what will work and what you want. You should know what Chip load is, or the relationship it has with speed, feed. Or the trade off between deep cuts with low engagement Vs. shallow cuts with high engagement. If that was all gibberish to you, then GWizard is 100% useless. 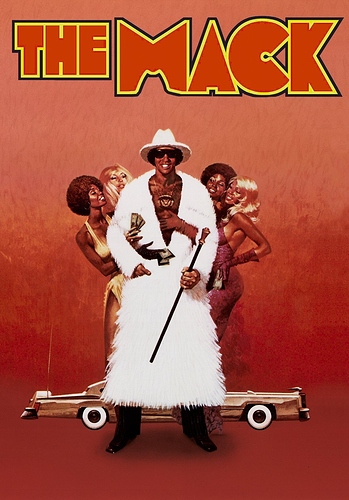 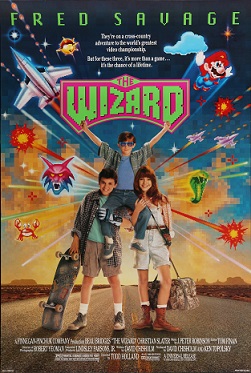 I didn’t realize it could do that. Is Amana’s Fusion360 tool database more complete than their Vectric database? 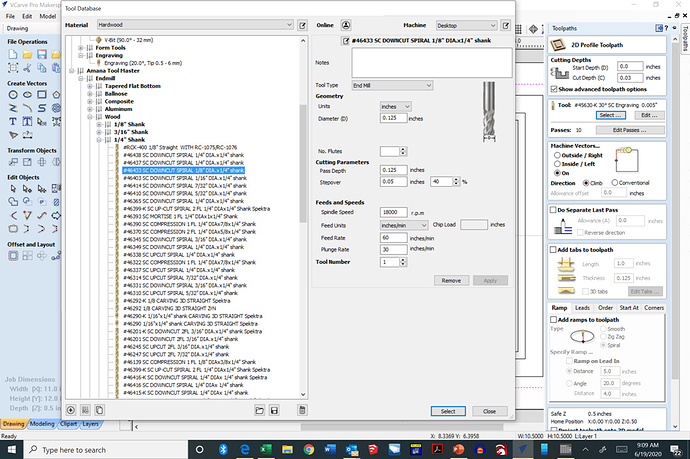 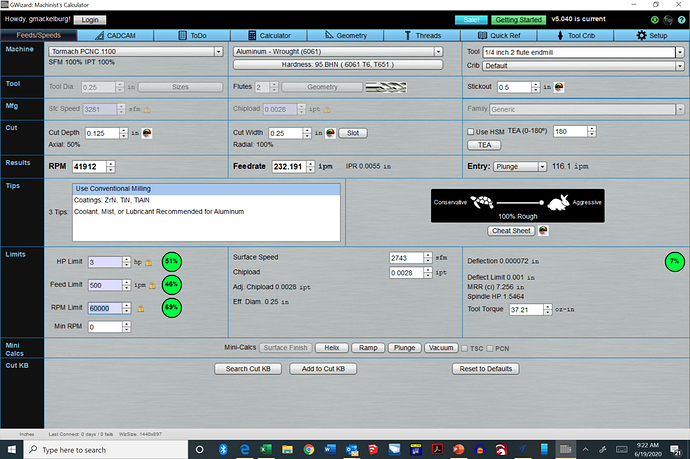 whole CAD/CAM tab is somewhat confusing most of the time

Maybe because it takes a long time to come up with the wrong solution (screen flickers too)! 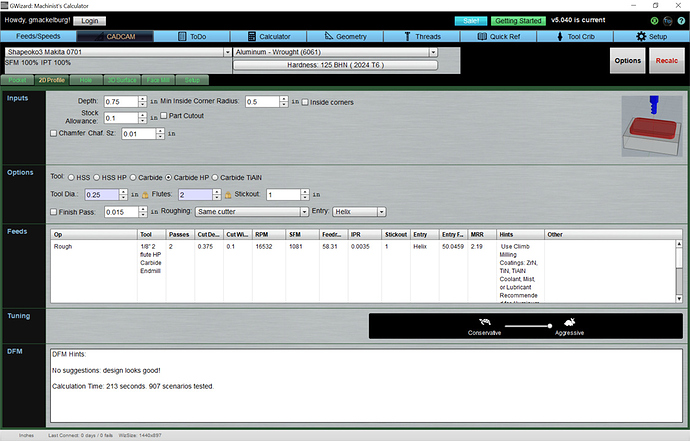 But then again you could just use Excel for free.

IMO selecting the right tool for the job is important. Maybe I’m naïve, but my tendency would be to believe that competent tool manufacturers would know how best to use them. Wouldn’t it be nice if you could get GWizard to use those recommendations? 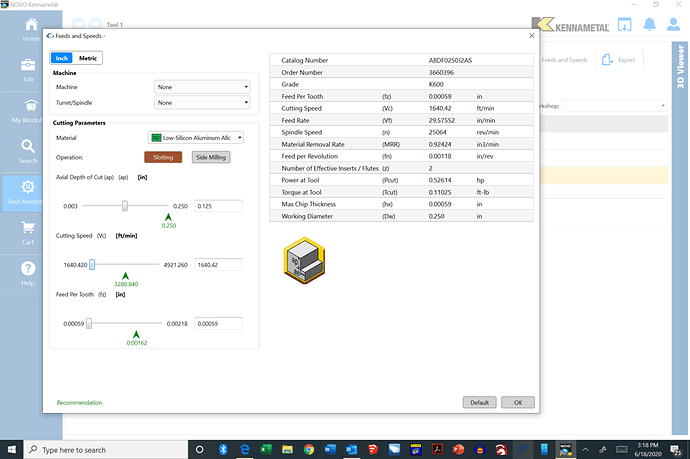 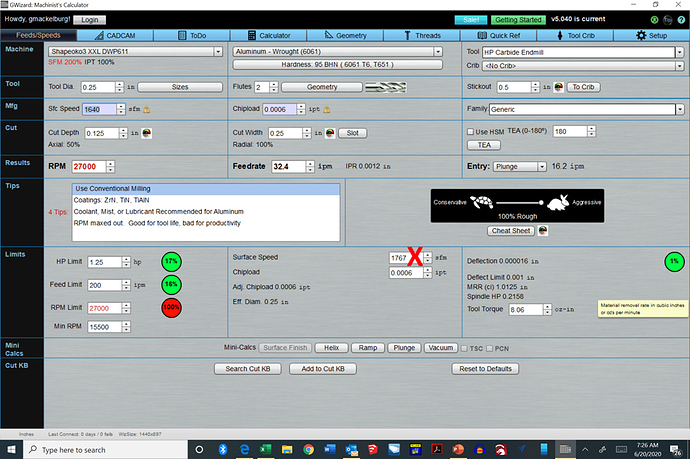 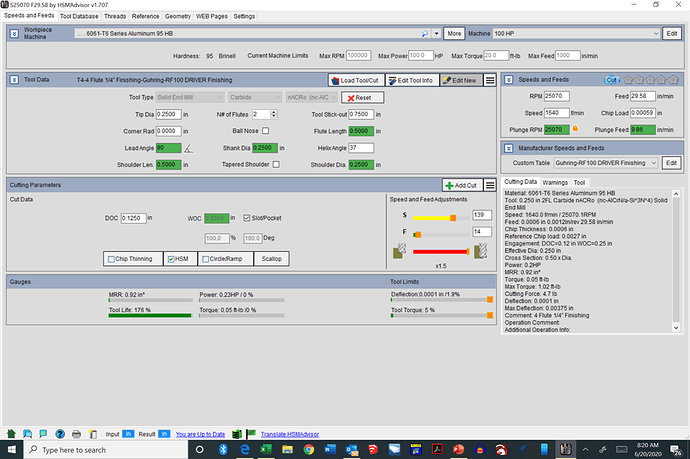 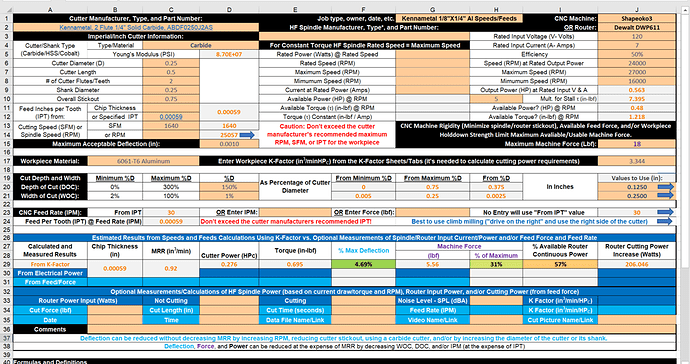 Maybe I’m naïve, but my tendency would be to believe that competent tool manufacturers would know how best to use them.

It does, as long as you stay in their recommended workflow. I feel like if I had a tormach, or prototrak Id get a lot more use out of it slider thing.

I’m right there with you on manufactures specs. But some people don’t have them posted so you need to have a feel for what will work for the tool you have. Although I find that there tends to be limitations in speeds/feed and rigidity on my SO3 so while I shoot for those numbers I often adjust to what has worked the best in the past. And maybe that’s good? maybe not? idk but it seems to work for me.

What is the application in the first and third picture you posted? I’m always collecting software…

It does, as long as you stay in their recommended workflow.

What is the application in the first and third picture you posted?