I’m really confused. I should have done a test cut before cutting my workbench, but the holes are all over the place. I thought I did a good calibration. The holes are all perfect, but not aligned to the grid at all. 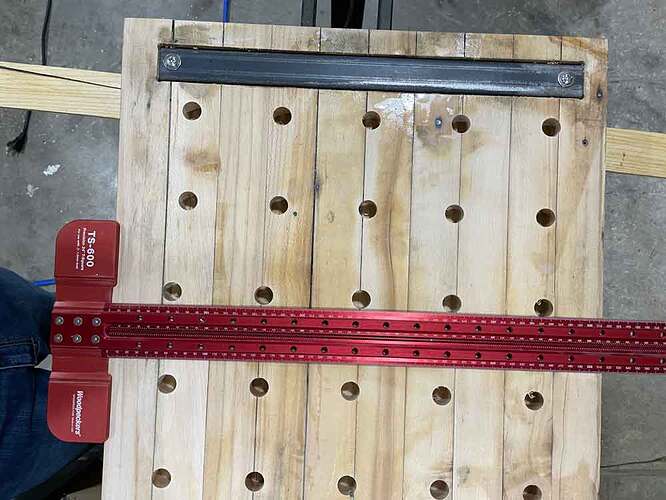 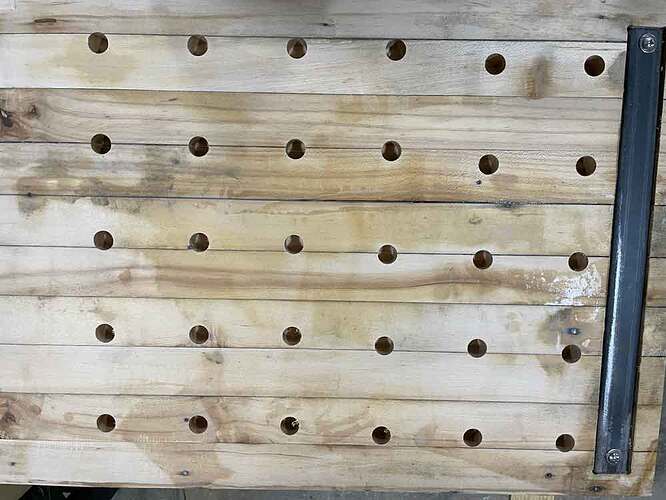 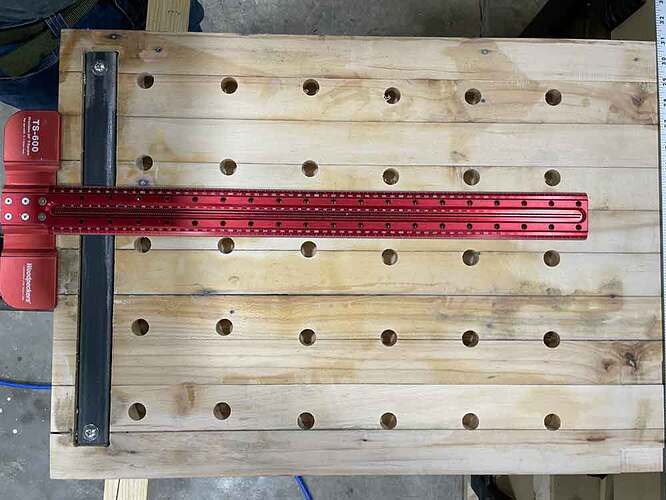 What program did you use for the design? Can you post the file?

Yes. In a bit when I can get to my computer. The machine seems pretty accurate and the holes are perfect I used fusion 360

gcode is fine (as was to be expected) 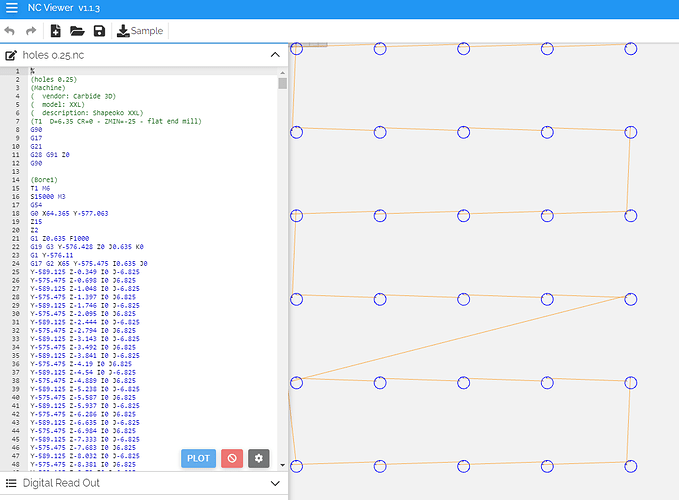 What machine do you have ? I would say check it mechanically, starting with pulley potentially slipping (draw a mark across the pulley and motor shaft, run your job, and if is turns out weird like this one go back and inspect the mark, if the pulley slipped it will be obvious)

Looks like the X pully? Any links on that?

It’s been cutting signs so well. Why would a boring operation be so off?

Looks like the holes align well vertically in your second to last and last picture (horizontally in your first picture), but there is a shift between “lines” of holes.
Determine what axis that is (hard to tell from the pictures) and then:
https://docs.carbide3d.com/shapeoko-faq/shapeoko-3-how-to-check-the-pulley-set-screws/

The good news is the holes will work. They may be ugly but using bench dogs and clamps will still work. I am sure you would rather have nice neat holes but sometimes the best laid plans of mice and men go awry. After you get your issue fixed you could plug the holes and start over but at some point it is diminishing returns on a workbench. If you plug your holes just move the holes over so you dont make them overlap the old holes.

I agree. This looks mechanical. Belt tension is usually the first culprit.

Thanks for the answers. I’m at home now and can troubleshoot this, but even if the belt were loose, it wouldn’t fully explain the level of variation I am seeing in the different rows of holes.

The cuts themselves are extremely accurate and consistent within each individual hole, but the issue lies in the fact that the rows themselves are off in the x-axis. This is causing a noticeable discrepancy in the final product. It is like something is slipping but then staying in place, not like a loose belt. Maybe this is a loose set screw.

In any case, I’m hoping to get a working theory as to what may be causing this issue and how it is resulting in this particular effect – any insights or suggestions you may have would be greatly appreciated.

again, really appreciate your help. Feel like I can’t trust the machine on nice pieces like this and would love to get to an understanding so I can check this in the future. A test cut would have been good, but even then I would like to understand what can cause this behavior.

Were you cutting right at the X or Y limit of the machine?

If so it’s quite easy to run the axis into the end stop (or foul the dust shoe or similar) and knock the machine out a few steps for the next pass.

The most likely problem is something mechanical — if everything is cutting well otherwise, then @LiamN 's theory of the machine running up against the limits of motion is likely.

It’s a machine. If properly assembled and maintained and calibrated and used, “it just works”. If something goes wrong, while the motion seems complex when considered as a whole, if one breaks it down and considers it one axis at a time, it all becomes pretty obvious.

like something is slipping but then staying in place, not like a loose belt. Maybe this is a loose set screw.

Did you check the pulley set screw?

hmm . . i’m pretty sure I wasn’t. let me check that – would that explain the pattern or just the edges?

Anything that causes an axis (just one from the look of your pic) to lose position could cause this effect.

As Will says, it’s most likely a pulley set screw or some other machine item, if not that then it might just have run out of travel, I’ve hit the end of travel thanks to a dust shoe on a clamp before, the momentary grinding sound of unhappy stepper gives it away if you can hear that over the router and vacuum.

Tim,
This is what I did to visually check my pulleys. 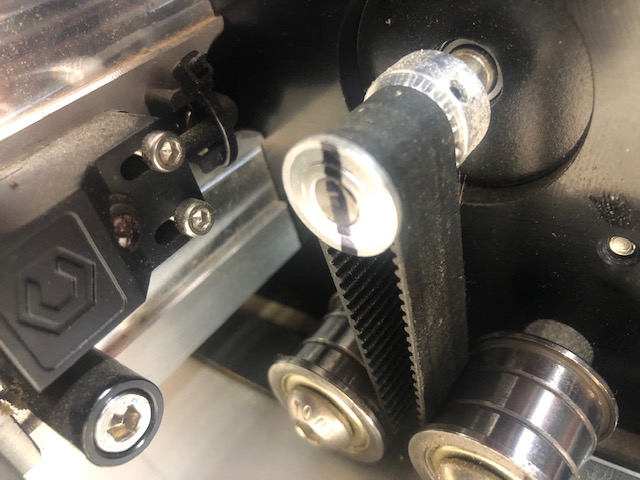 Here’s how I fixed my pulley set screws

(Zman and I need to start up a routine - lol)

After dealing with the Y1 pulley set screws backing out numerous times on my XXL and messing up jobs, finally decided to implement regular socket head screws - covered here and other places, but a couple points to add for others with the same problem. The socket head screw size you need is M3 x 8mm, you can get a multi-size box from Amazon for $6 that will be more than enough. You want to use “purple” thread locker, it’s low strength and made for set screws. Several brands out there for ab…

I did some math and found a pattern: 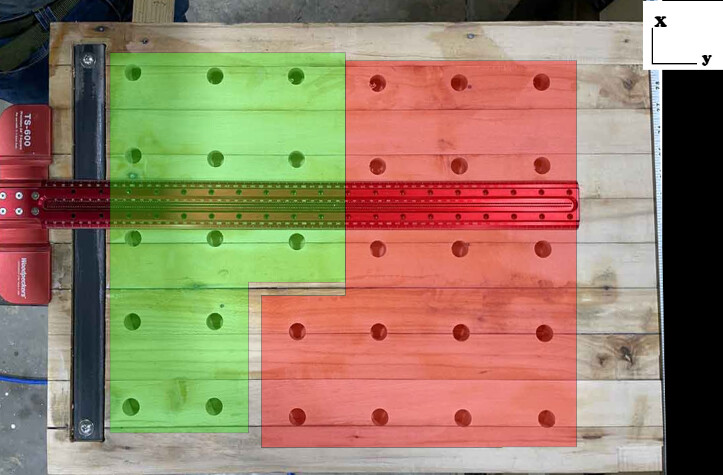