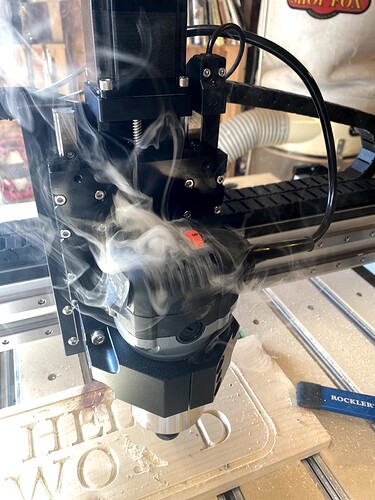 Whipped up a quick ‘hello world’ program (and got fancy with a tool change) after reterminating the y-axis motor connections and moving the limit switch down so the gantry could clear. About 5 minutes into the job (running at all the defaults for that tool plus a little sped up feed because it was just slooooowww - it’s pine) the router quits making noise and lets the magic smoke out.

That is by far the fastest I’ve ever killed a power tool.

Not off to a good start.

Quick, vacuum up that smoke and get it back inside the router…lol. Sorry man, I feel your pain…

I smoked one after a few months (back in 2016) by injecting some nice flaky shiny aluminum chips and the DeWalt gave out a beautiful blue flame…Now I make my router wear a cute white sock prefilter.

My motto: Always have spare parts on hand… but 5 min…well…no comment…

I really didn’t think that doing glacial slow passes in pine would kill a router before it broke an endmill. It did smell a little ‘off’ on first crank up but I attributed that to just assembly smells. I wonder if I have it too tight in the clamp?

Obviously it was put together incorrectly - the smoke containers weren’t sealed properly thereby allowing the smoke to escape prematurely.

I’m sure Carbide will send you a new, properly smoke sealed unit right away!

I’m sure it was just a defective router. Contact customer support and I’m sure they’ll take good care of you.

But as a 5+ year user…and seeing that you purchased a PRO model…can I make a recommendation? (Pick up a Makita RT07 Model. I installed one on July 2016 and run it almost everyday…on 2/2/21 I finally changed the OEM brushes…after what I estimated to be 6000+ hours of hard use…and I cut metal with it…(except for that one Chippendale Claw Foot Partner Desk I made)

I’m going to order one right now. If they send me a new replacement (and I feel like they should) I’ll keep it as a spare just in case.

At our metal shop I use 2 Makita grinders that I’ve had for easily 10 years of nasty nasty use and the only maintenance I’ve ever had to do to them is replace a power cord that got clipped.

Check out what looks to be plastic bits that fell out of the router as I was taking the bit out. 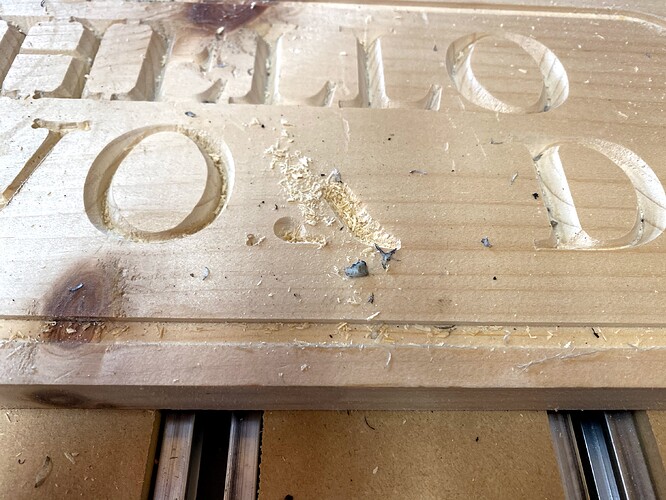 And PLEASE put a sock (pre-filter) on it (to greatly extend the life of the brushes)…cause I’m not just a pretty face…I’ve also recently stayed at a Holiday Inn Hotel…and an Ex-NASA (retired) Engineer.

If you don’t get the Holiday Inn joke, click here: 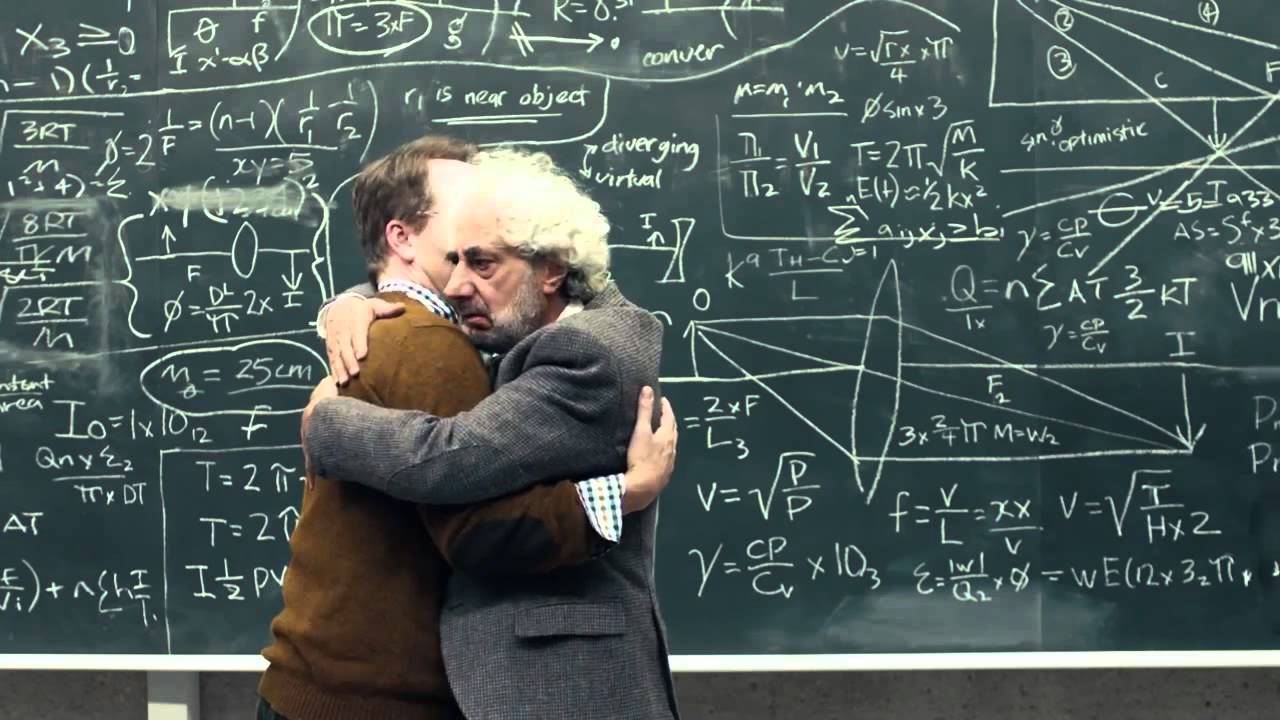 Does the RT07 have a long enough power cord?

Sorry you got the bad apple Sir. It sucks when your new investment literally goes up in smoke.

Any time you mass produce anything it’s always a roll of the dice as to what percentage will fail prematurely and when it’s made in China those odds increase. But even high end tools have a premature failure rate and although most are caught during testing. Longer tests increase overall product costs and when thousands of units are being produced its more cost effective to replace the few defective units then to increase customer costs to thousands of customers.

I hope you get back up and running soon!

I also see you had the router set to 5 or 6 and suggest when your new router arrives to break in the bearings and brushes.

Start with an end mill tightened at low speed and no load for 1 minute, turn off the router for a minute, turn it back on for 2 minutes at setting 2 or 3 then let it cool for a few minutes again and repeat at a higher setting.

My router when new would noticeably slow down for a second and recover during this process but after running it in the RPM drop went away. The bearings will get hot until fully broken in and that takes a few cycles.

Does the RT07 have a long enough power cord?

Yes - the makita cord will work for the Shapeoko Pro XXL. You will need to attach an extension cable in it after it leaves the drag chain. Picked up one at amazon for a few $

sock (pre-filter) on it

How do you change the motor speed and turn the unit on and off with a sock zip tied to the router?

When you say extension cable do you mean just a plain extension cord or is there some kind of special extender needed? EMI issues?

plain extension cord or is there some kind of special extender needed?

Basic extension cable. Love this one because it was relatively short and the same color black as the cable so it blends in with the sawdust 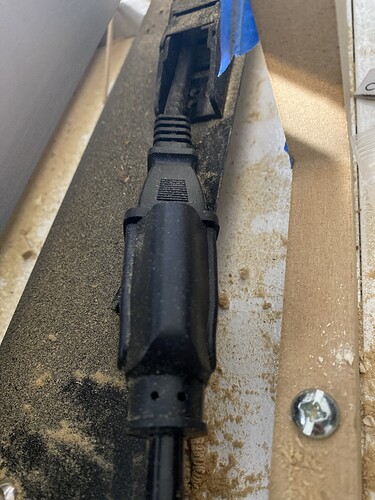 Oh and before installing the makita router - remove the security tag 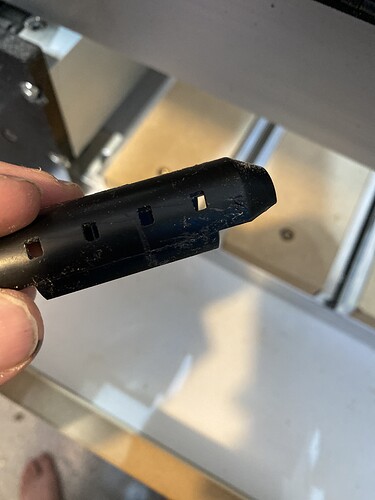 The Makita has an eight (8) foot cord…but I don’t know what “Long Enough” means…I’m a machinist, and engineer…we need numbers to answer a number question…

PS Regardless if it came with an 18" cord, an extension cord is a cheap method of adding a premium router to the awesome PRO machine… unrelated, but fun to say…you can put lipstick on a pig…it’s still a pig

I’ve read that the router supplied by Carbide has an extra long power cord. So I was wondering if the Makita cord was long enough. Checking this is the model y’all recommending:

…giggle… I don’t know about YOUR socks, but my socks are soft and flexible…so it is very easy to turn the speed knob as well as turning the router on and off.

I HIGHLY recommend the Bit-Runner…or the DIY version…(which costs about $5 to make)…to turn your router ON/OFF via gcode.

I hooked up my 5V relay box outside of my enclosure and tested it today. Works awesome. [image][image]

FYI - they sell two versions of the same tool

The thing is, once you install that trim router in your drag chains, you are not going to want to remove it to use it as a normal router (way too much effort), so just go with the $99 one

I also see you had the router set to 5 or 6 and suggest when your new router arrives to break in the bearings and brushes.

Start with an end mill tightened at low speed and no load for 1 minute, turn off the router for a minute, turn it back on for 2 minutes at setting 2 or 3 then let it cool for a few minutes again and repeat at a higher setting.

My router when new would noticeably slow down for a second and recover during this process but after running it in the RPM drop went away. The bearings will get hot until fully broken in and that takes a few cycles.

I read some interesting things about bearings and lubrication whilst reading up on spindle motor efficiency with @gmack . In a couple of research papers there was some solid discussion of the power loss to the bearings which described the changes in friction losses in the bearings as RPM increased. The losses initially rise with speed and then drop sharply as the grease exhibits ‘rheological behaviour’ under the high-speed movement of the bearing and transition from thick goop to an oily liquid with much lower viscosity and drag on the bearing. Both the flow speeds and temperature seem to be involved in this transition.

This appears to be related to the spindle warm-up programs that many VFD users and lots of the big machine manufacturers such as Haas recommend. In initial cold-start the bearings are cold, clearances are not what they will be when warm but also the lubricant (if grease based) is thick and goopy and sitting wherever it congealed after the last run. As the spindle runs slowly it works the grease around, warming it up and getting ready to run high RPM without the grease creating hydraulic forces which damage the bearing.

On a new bearing this will be particularly important as it will be freshly packed with grease and may still be tight on clearances until it has run in.

That’s the edge of my mech-eng, I’m sure there’s somebody here who knows a lot more about this.