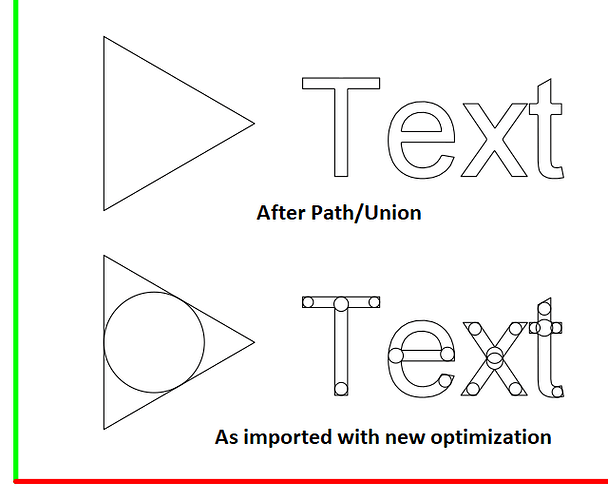 Okay, I don’t imagine I’m perfect, and I still don’t have a good, complete set of G-code files to throw at it for testing, but it looks like I’ve reached the point of being able to throw an initial public release of my new Inkscape input extension up on GitHub.

Creating G-code from a design is a transformative event, and depending on geometry and exactly what you’re doing, some details (e.g. sharp inside corners) cannot ever be represented fully by the output. I’ve been working on this extension for a bit now, and I’m quite surprised by how much geometry you can reconstitute from many G-code files with only minor effort (and V-carves can give results practically indistinguishable from the originals).

The extension is now hosted on GitHub: ImportGCode
And just for convenience and safe keeping: ImportGCode.zip (10.3 KB)

Grab it, try it, and report on your results. And if you’d like to donate some G-code files to fill in my testing set, I would be grateful. I especially would like to have some V-carving files with G2/G3 arc moves, as I had none of those to test with… except a lumpy folder graphic I bodged by hand.

An Inkscape input extension to add support for some G-code files to the File/Import… dialog.

Importing G-code is easy. Turning it back into something worthwhile may be a bit more work, but in many cases a good result can be reached without too considerable an effort.

Now you need to turn it back into something resembling the original geometery. For V-carves, this is actually quite easy.

Unlike V-carves, there’s a bit more involved when reconsituting geometry from G-code.

Thank you for your hard work. I will be trying this code soon.

Ok, I’ve got to try this! This sounds like a fantastic tool.