Does it also create an STL, SVG or other usable files that we can massage in another CAD/drawing software?

I do not believe that is within the current or future scope of the application, which means in the context of, say, developing a model of this door to be used in various contexts, I wouldn’t consider it my first choice of tool. On the other hand, if I managed to model the door and had an STL or heightmap graphic, PixelCNC would likely be the software I’d turn to for the CAM.

(Oh, and it occurred to me after posting that if I just make my own edited copy of the “GRBL (Metric).txt” post, I can likely just modify the prefix block and tool change block to make it trivial to cut the output G-code files into single-tool pieces.)

Didn’t you write an extension to import GCode into Inkscape?

Yes, but since the result is inherently two-dimensional, it’s generally more appropriate to flat or “2.5D” files. A simple 2D design (e.g. laser cutting or a simple pockets-and-profiles design) can often be almost perfectly reconstituted, but flattening a full 3D carve into an SVG tends to result in a minuscule signal-to-noise ratio for the resulting path data.

Well a smart guy like you should be able to find a way to go from GCode to STL!

I believe you can export an STL from G-Code imported into and simulated in CAMotics.

Wow, I will have to check this out.

“Export cut workpiece to STL file.” is indeed right there in the CAMotics features list. You wouldn’t happen to have heard of any convenient way of turning an STL file into a heightmap image, eh? That’s the missing step I’ve run into multiple times. (The standard reply seems to be something like “First, install and learn Blender, and then it’s easy.”)

Answer with some options at: https://stackoverflow.com/questions/17932107/converting-stl-file-to-an-image

You could get close by creating a heightmap (depthmap?).

Here is the extent of my efforts: Well, the STL was too big to compress and add, but that’s easily generated if you’d go that route, and I don’t know that the one I did is valuable in any way.
Here’s the heightmap image: Well, BMPs aren’t allowed, so I’ll zip it.
test2.zip (1.1 MB)

I used software called Materialize to create the heightmap (no idea what I was doing). 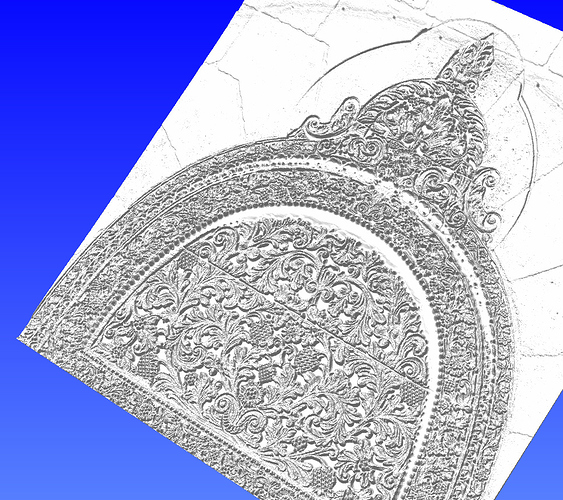 There was a utility mentioned that takes the output of PixelCNC and can generate an STL. Have not tried either.

People with ambitious wood carving projects (like this one from @wb9tpg, or this from @RichCournoyer) can probably share a better grounded opinion on how doable this is.

Thanks for the mention. I’m making slow progress as I’m learning the tool (blender 2.8) but I enjoy learning new things and am having fun.

My main difficulty is with the pictures I have available. If I’d taken them for modeling purposes I’d have tried to get front-on shots to reduce perspective and have even lighting. Keeping them in focus throughout would be nice too. The pictures I have to model from don’t have any of those things going for them. I think any software that tried to convert them wouldn’t work well in my case.

I’m working on the small part of the pillar just below the base now. I can’t even see for sure what’s in the pictures. I have a good guess there are pairs of gothic arches with something under that balls that separate them. I may make up that something. I’ve looked online for similar stuff and can’t find anything there to help. That’s the kind of things that bug me since I’m a Type A person and a little OCD and getting it “right” is important to me.

I updated my progress shots in the other thread. Thanks

Modeling this in Blender is definitely an option, and probably a good way to learn how to use it (I haven’t yet). But another option would be to use Vectric Aspire, although it’s not free like Blender.

This tutorial video goes through modeling an oak branch with leaves and acorns from a hand sketch.

One advantage to this is that the resulting model would be ready for creating toolpaths in Aspire.