Small (1 inch x 2 inch) soft maple inlays into walnut. Both woods are fairly soft as hardwoods go and are similar in density. I pocket the walnut and contour the maple. They fit snugly, but there are gaps at the top of the clouds, clearly visible in pics, ranging from .08" to .012". I can see light through the gaps. All of the inside curves have a radius greater than my 1/4" bit. 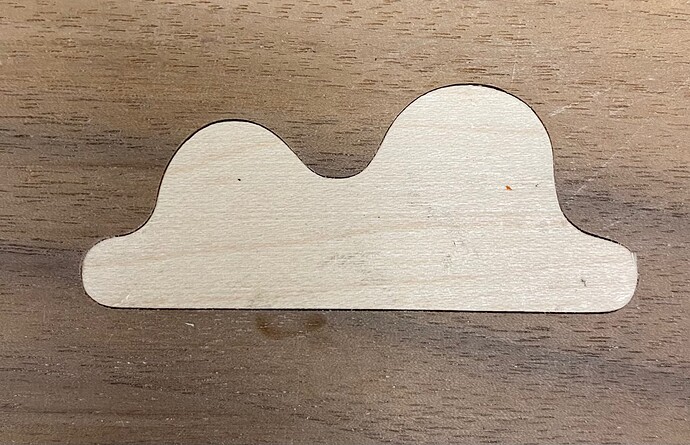 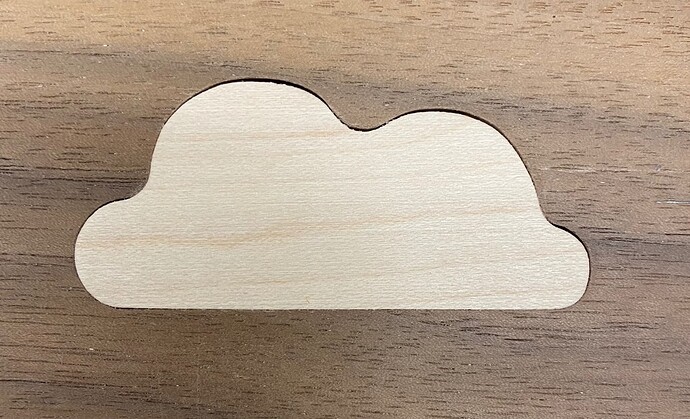 The only thing I can think of is calibrating for belt stretch (which I have not done lately), though I’m not convinced that could be the issue. I’m using the same file - just pocketing on one side of the line and contouring on the other. No offsets.

I feel like I’m missing something obvious. Why the gaps? Ideas?

Geometry matches up, so files ought to be good. 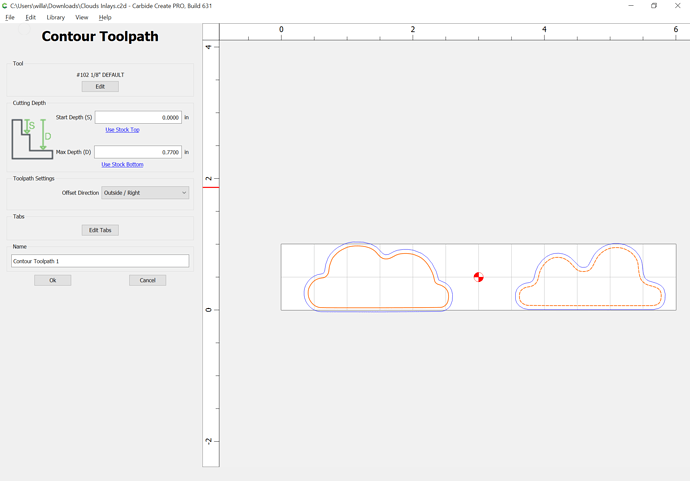 It would be better to use a more rigid tool and to add geometry and cut as a pocket down to tab depth or the penultimate pass: 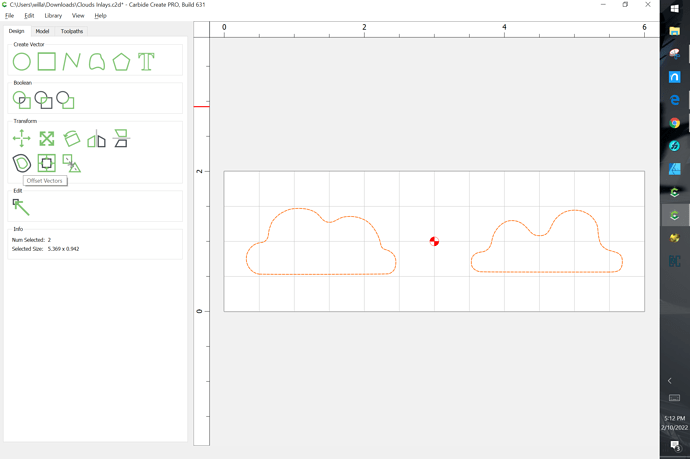 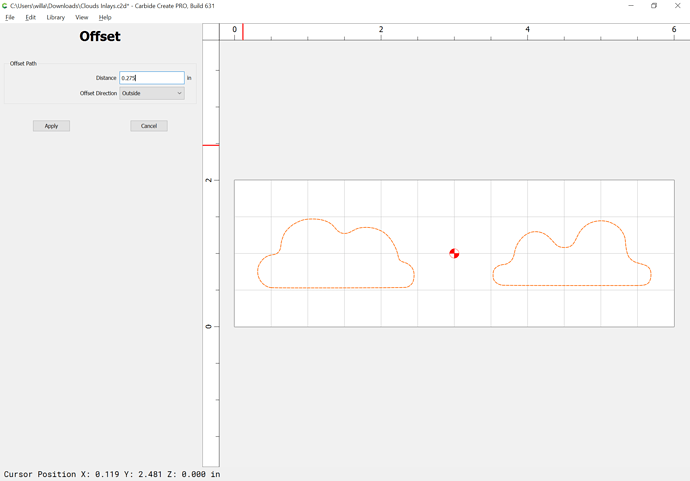 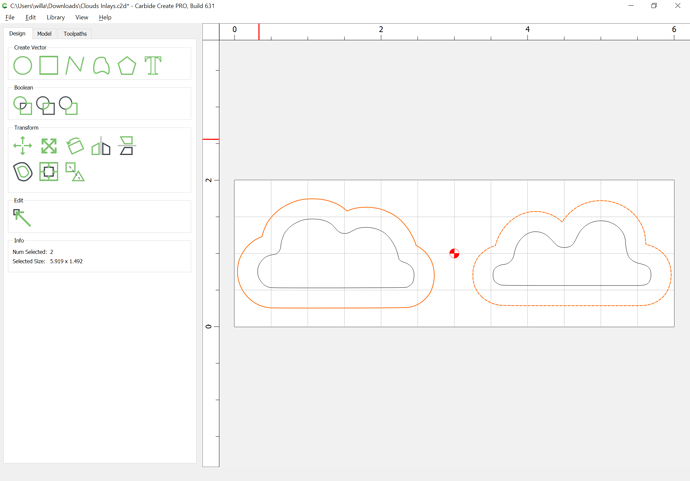 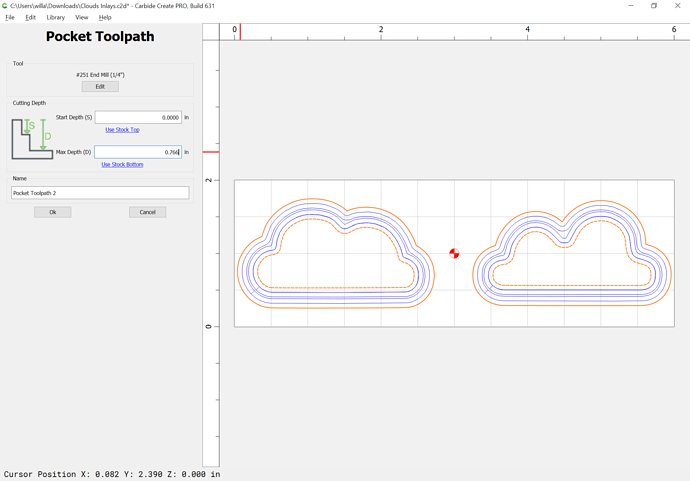 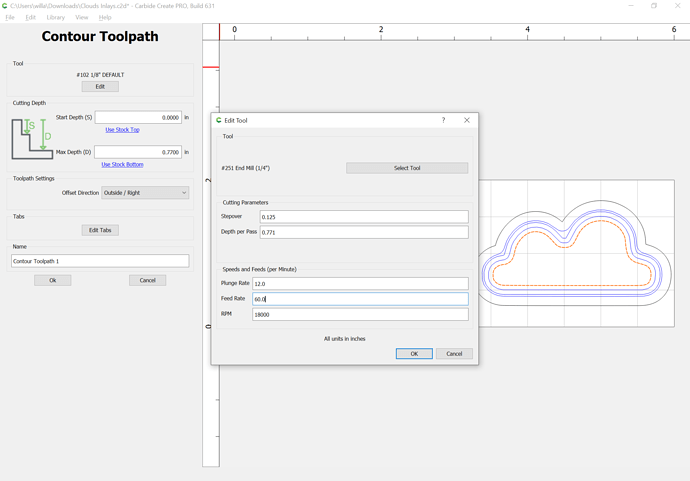 A further improvement would be to leave a roughing clearance and make the last a finishing pass.

And if you haven’t, yes, you should calibrate:

The typical technique for machine calibration: depends on precision measuring tools, and is limited by the reach of the tools in question. It should be possible to cut strips from a suitable blank of material, one along each axis — so we set up a square file which matches an available blank of material: [image] and put in suitable geometry and assign toolpaths: [image] Put the origin at the top left corner so that it doesn’t need to be changed. When cutting material from the square, a…

That said, why not do a V inlay?

It’s not a direct answer to your question, but rather a method to patch/correct what you already have.

If you have some sawdust from one of those materials, put CA glue in the gaps and then rub in the saw dust. It will look messy at first, but then sand it back. There are several videos on YouTube showing this.

Go to the 6:20 mark in this video…
The Woodworking Problem Solver | CA Glue - YouTube

Search also suggested this one (I only glanced at it).
magical liquid + magic powder / Chemical reaction of CA glue and saw dust [Woodworking Tips] - YouTube

@WillAdams - I posted the wrong file - I am using a 1/4" 201 for both operations. That said, thanks for the ideas - I’ll try sneaking up on it with geometry and/or a finishing pass.

@ColdCoffee - CA glue solution noted, and I’m sure it would work, but my obsessive tendencies demand perfection!

Why not vcarve? That might fill your gaps better than making a straight wall plug and socket.

I can’t vcarve. These will be going through the side of a segmented bowl. Trying to do something like this: Combining Wood Turning and CNC

On the pic it looks like the gaps are mostly along the Y axis? Not sure what to conclude from this though.
Calibrating may help but I suspect it won’t, as you are not after accuracy on absolute dimensions but rather consistency between two cuts of things the same size (i.e. even if calibration was way off, it would be off the same way for the two cuts)
I tend to think it’s tool deflection like Will mentioned, and just being super conservative on depth per pass may fix this.

Will’s suggestion will minimize effects from deflection, but if that doesn’t completely fix the gaps you may need to lie about the size of your end mill; if the remaining problem is a mis-sized mill (or runout) this can correct things.

I was thinking this, too. The gaps are on the Y axis. I would rotate the models 90 degrees and cut with the same sort of strategy as the first time. Then look to see if you’re still having gaps on the Y axis or if the gaps turn along with the model.

Thanks for all of the ideas. I solved the problem so I thought I’d share…

I fixed the radii, and then had a perfectly shaped insert, although .003 undersized. I made the inserts bigger with a .003 offset and now they are tight fitting as shown below. Still working on the bowl - I’ll post to the gallery when it’s done. 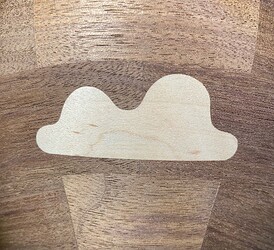