Is the Carbide Compact Router Supposed to be this noisy / loud?

Finally have my new Shapeoko Pro XXL up and I am just getting into actual cutting (which works fine) though I am noticing that the stock Carbide Compact Router is really loud and also shifts tone over the course of operation - even with no air and no cutting!

In my intuition I feel there is something wrong. Almost like some weird undersized bearing is causing the vibrations to shift harmonics every 15-20 seconds like there is some phase transition between stable zones…

Okay that made no sense but every other router I have ever used (Dewalt 611) was not this loud nor did it change noises / pitch just sitting there spinning.

I tried my best to record this on video but you know it was hard to catch… It usually happens about 20-30 seconds after starting up. In this clip you can hear it. At about 0:15 in it changes pitch. When you touch the outer wall it feels like it’s a bad bearing. Sometimes it’s worse. Other times not. Happens when cutting too but the machine does not balk or cease performing.

Also to be sure the collet and bit are very secure and there is nothing loose or playful about anything. very solid. Nothing moving as far as I can feel. Dust boot is very solid too. Nothing is loose…

However, I thought just a few days ago my controller was DOA because I didn’t see the power on switch on the front so I completely accept that I am doing this wrong or didn’t perform a step like lube the bearings in the router - I digress.

Maybe just go get a Makita as backup?

That’s louder than my experience.

Write in to support@carbide3d.com and we’ll get it sorted out.

Picking up a Makita is expedient, esp. if you have a local dealer/service center — it’s a drop-in replacement, sharing the same bearings, brushes, nuts, collets, motor, and motor housing.

My first instinct is to check the motor brushes to see if they’re damaged or if anything is loose in there. Not that you should have to with a new unit but things happen. I’d agree it doesn’t sound right. Either way, definitely reach out to support.

Thanks for the help!

Although I’ve used trim routers for years I am confident I set it up right though ultimately I have no idea what was wrong.

Worth noting this happened on a finish pass. I didn’t hit a nail or hog through a full inch of walnut or something.

Anyways, went to ye’ ol’ Home Depot and picked up a Makita.

Wow, HUGE DIFFERENCE. No rattling or weird noises when running.

You can see a little side by side in this video I made: https://www.youtube.com/watch?v=8fgEOSTUh4A

Ultimately I think this was a lemon but still underscores my supreme belief you need a full backup of everything to ensure high uptime! Still worth it and love the machine though 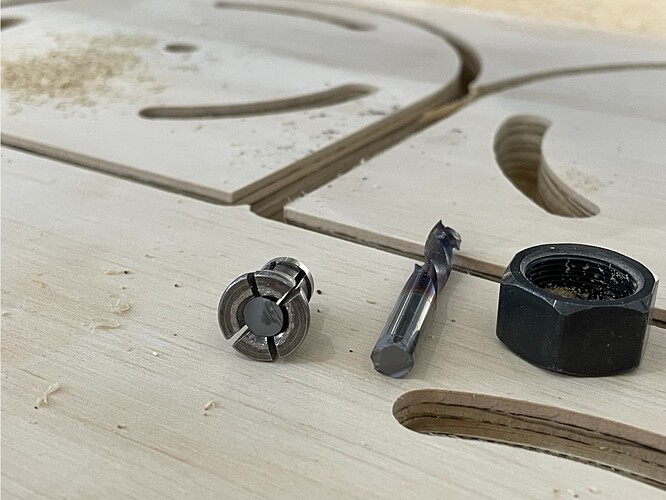 I think that C3D will make you whole but with your bit breaking I would take a look at your speeds & feeds. It may have been run out in the router but with the bit snapping. I have a Dewalt 611 router and I have a 4 inch overall length bit that I use to cut 1.5" deep material. When I use that bit I insert it all the way up in the collet until it stops and then pull it back down 1/4 inch and tighten the collet. If I only have the bit inserted the minimum, which the bit is just past the top of the collet, that bit screams when you start it up because I think it is rotating out of round.

I bought a used Shapeoko 3 XL with the C3D router. The previous owner bought it new and had never ran it very much. The old owner was dissatasified with the performance. When I got it home I felt of the collet and the router shaft was wobbling back and forth. The bearings in the router were bad. I bought a Makita 701C to replace the C3d Router. The C3D router is a clone of the Makita so the internal parts are supposed to be the same and the collets and brushes as well. I dont think that the clone C3D maker is using the same exact parts as a Makita but maybe the same sizes and so on. The Makita was a superior router over the C3D. I eventually sold that XL and keep my XXL running well with the Dewalt 611. I finally had to change the brushes after 4 years. Here on the forum the C3D routers seem to need their brushes changed more often.

We see a lot of complaints about the C3D router here on the forum. Maybe that is because it is a C3D product and people are not complaining about the routers bought from some one else. Not sure if that is the case so I will give the benefit of the doubt to C3D. However my Dewalt 611 has never given me any problem and the body of the Dewalt is longer than the Makita/C3D routers so I can cut lower. That ability to cut lower may be an advantage with the Z-Plus axis.

I should have replaced my replacement that C3D sent me to replace a defective router.
The one I am using now does a kinda of ramp up and ramp down with speed and on occasion sounds like a bearing is trying to die.
Not supposed to happen with 2 brand new routers?

Which one to replace the Makita #? or Dewalt #?

To the OP, apparently your not alone. I just haven’t used mine enough to to really complain that the replacement was bad also. My warranty expired last month

One thing to consider on the newer machines is they mostly have the 66MM router bracket. The Makita/C3D router is 66MM. The Dewalt is 69mM. The Shapeoko 3 came with a 69MM mount and a 66MM adapter. So if you upgrade to the Dewalt you may have to replace your router bracket.

Personally I love the Dewalt. I have had both Dewalt and Makita. The advantage of the Makita/C3d router is it can run slightly slower than the Dewalt. I never cut anything that I need the slower speed for so for me it is not important. I also have a Dewalt 611 with the plunge kit that I keep as a spare, never needed it, and use around the shop for small projects.

The Makita and Dewalt are similar in price. If you shop you can get either for around $100.00 but at Lowes the Dewalt 611 is about $150 with the fixed base. The plunge Dewalt is around $200.00. Lowes does not carry Makita but Home Depot does.

I got a new extension on my browser from Capital One. It checks the prices and tells you if you can find the item cheaper somewhere else. I dont have a Capital One Card but it still works. Sometimes Walmart will be the cheapest price and has free shipping without a membership.

Similar in price, but when you factor in a new mount, and Sweepy, going with the Makita is cheaper.
The router that came with y Pro XXL didn’t last long as well. Bearings. And even though Carbide Create ffered to replace it for free, why make the same mistake twice? The only downside with the Makita, and possibly the DeWalt is that the cords are shorter than the Carbide. But in the Makita, they are identical, and easy to change out, if you don’t mind voiding the warranty on the Makita.

Thanks for chiming in y’all these are some great notes.

I am not sure on the model number for the Makita router but I went with this one and it crushed 3/4 ply all day (same feeds and speeds) for like 8 hours so I feel we are back on track.

I definitely appreciate both the Carbide Compact Router being the same 65mm diameter as the Makita. Made swapping them out super easy.

In order to making swapping, removing, or changing the router I put in a True 1 locking connector. I love these and it makes connecting it at the head so much more simple for un doing that drag chain can be hard on it an eventually break it. 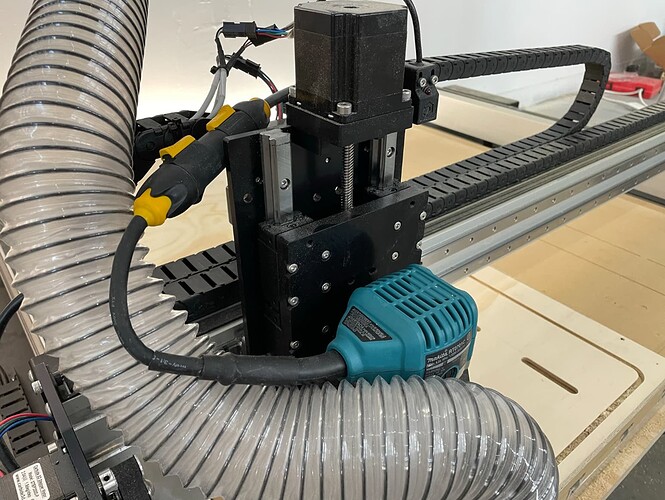