When I use Carbide Motion v513 to jog my Shapeoko XL, the jog increments appear to always be doubled (as compared to the actual movement). If the increment is 1mm and I use the touchscreen to move X, Y or Z, I hear one distinct movement (not the occasional double) but the movement will be 2mm. I also get the occasional double movement, one jog on X Y or Z will result in two (audibly distinct) movements resulting in 4 times the jog increment.

Different computer, but same version of Carbide Motion to jog my Nomad 883, the jog increments match the actual movement, and I never get the two distinct movements.

Trying to figure out which direction to go to trouble shoot this. Is it the touchscreen interface, is it the Shapeoko configuration, or is it something else? Would be interested to hear is anyone else is experiencing this, or any advice.

Here is a screen shot if needed. The jog increment was 0.25mm, and I pressed X, Y and Z buttons once each. The result was that I moved 0.5mm in each direction. Forgive the odd screen layout, tablet is mounted in portrait mode and that is just how it looks on screen. 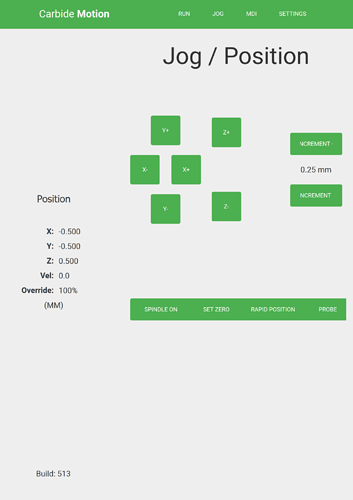 The doubled movement happens with some touch screens.

If you are up-to-date OS-wise, let us know the specifics of your system at support@carbide3d.com

My mouse was double clicking a lot. I had to replace it. The double bounce of a switch may not be a malfunctioning of the button but are you having any difficulty with any other app and the same buttons.

Just something to think about.

I did confirm that it only happens with the touch interface. If I use a mouse it works as expected. So hopefully there is a tweak as the point of pairing that laptop with the shapeoko was because of the touch screen.

While the touch screen seems a good idea at first, I’ve quite switched over to using a pendant instead, either:

The SixKeyBoard CNC Edition has all the great features of the TechKeys SixKeyBoard plus included custom keycaps, USB Cable and optional pre-programming for specific CNC machines.  Don't see your CNC listed here? Contact us at info@techkeys.us...

Go into your settings and see if there is a pressure setting for your touch screen. It may be in the accessibility settings.

Its in production!!! Subscribe to the newsletter on http://techkeys.us to be notified as soon as it is in stock!!

Funny – just after posting this the aluminum anodized cases just showed up! They look fantastic!

Hoping to get the PCBs in the next week or so. 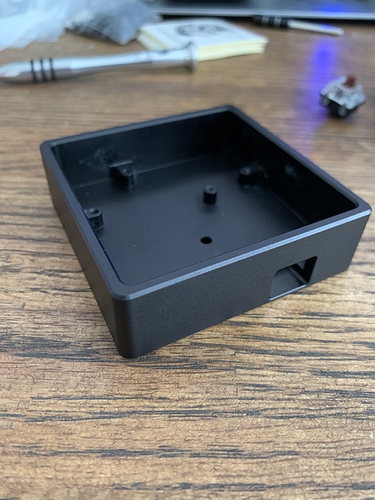 Thank you @willAdams and @i3oilermaker
I assume increment up and down will be two of the three additional keys?
If so then this sounds like something I will need to have.

Unfortunately, increment up/down is only available on game controllers such as the Logitech F310 — if the electronics allow presenting the peripheral as a game controller then yes, those two shortcuts would be available.

Without them, unless @robgrz exposes them as keyboard options you want 4 buttons, one for each speed as I emulated for a gamepad as noted above.

Yes - the keys are programmable so if at any point the available keystrokes are made an option they can be added.

Just so we’re all on the same page, in Carbide Motion 5 the shortcut keys are:

Having the same issue, my memory was jogged about the double-jog on another thread. I am using the Fusion5 Windows touchscreen that a few other people seem be using. This one: 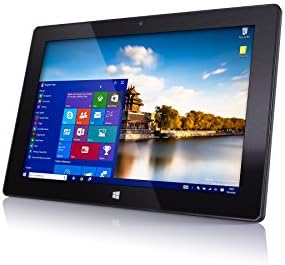 Which brings to mind another question–is there a way in CM to tell the machine to go to a specific location? As in “CM, goto Z=5mm”?

You can use the MDI to move to specific coordinates.

My only concern with the 4gb ram machines is that windows 10 uses about 3.6gb of ram just for the OS. That leaves very little for anything else. I have had machines that had 16gb of ram and they run much better then 8 or 4gb machines with the same processor because they do not have to constantly page memory in and out constantly.

If we are only talking about Carbide Motion (not Carbide Create), I have zero concerns about specs. Not to diminish what Carbide Motion is doing, but it is basically reading a file (G-code) and sending messages down a port (USB). It doesn’t need processing power, what it needs is consistency and reliability.

Not everyone is in the situation of dedicating an entire computer to their CNC machine, but this job is a great place for old machines to retire. As long as the AC adapter still works, it doesn’t even matter if the laptop’s battery is dead.

Someday it would be nice for someone to collect the community’s collective thoughts on the proper way to setup a Carbide Motion computer. For example: Disable the power saving features that would put the computer in one of the sleep states. You don’t ever want the computer to enter ANY sleep state while communicating with your CNC. Personally I don’t want the display turning off, but more importantly you don’t want Windows deciding to power off the USB port.

And if you’ve heard of “overclocking” a computer, I have gone the other direction. I underclocked my (very old) Microsoft Surface 3 so it will run cooler and not power on the fan. Where I have the PC mounted (inside the enclosure) I didn’t want the fan pulling in any more dust than it had to. Even with the CPU max (redline) cut nearly in half the CPU is still basically coasting. 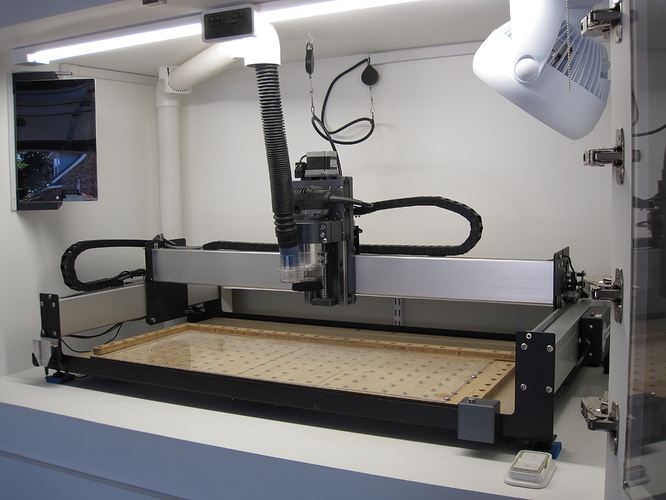 My Nomad is connected to an even older laptop, that still has the Windows XP license sticker. It is running Windows 10 now and Carbide Motion runs flawlessly. But you can’t go with some of the default Windows 10 settings. You don’t want Windows to download updates in the middle of a CNC job, or deciding now is a good time to scan every file for malware.

On a side note, this has got to be the cleanest Shapeoko setup ever

Thank you, I’ll eventually post to the enclosure zoo. I’ve still got one step left before I can call it “done”.