My easy waste board add on

Just thought I would throw this up here for people looking for ideas. This waste board has a clamp system that is very quick, versatile and simple use. The bad part is the high profile. When using this set up I have to take every precaution to make sure the tool path will never cross my clamps. With the limited z axis the Shapeoko has this can be difficult. One thing not to forget when using carbide create files is at the end of the cut the cutter is going to stop on the last cut and move straight back from there.
I wish there was a way to set default end and start paths. I find myself going into rapid position to move the spindle before most cuts to make sure the cutter dodges my clamps.
Any way, it’s defiantly not perfect but it might give some ideas. I also have a video here: https://www.youtube.com/watch?v=4nTh7xQbDaw 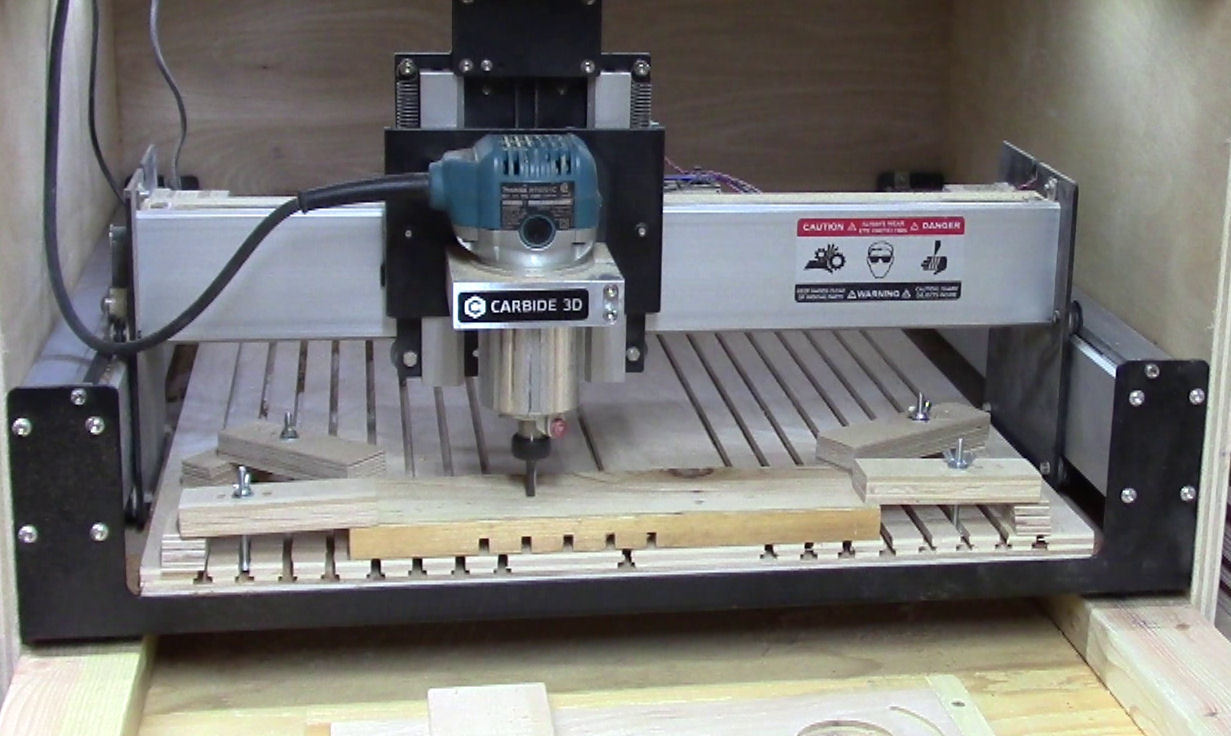 This is great - got to love t-slot.

Do you find the additional height is an issue or do you mainly mill quite short stock?

The height is a drawback. It works good for cutting 1" material and thinner. Anything over that gets hard to work around the clamps. I find myself clamping jigs into place because I make a lot of repeated cuts for my business. With my jig in there adding height it is really tough. I’m probably going to end up bolting my t-slot waste board on with wing nuts on the bottom side so I can remove it easily when I need to use my jigs. It would be nice to have a bit more z axis travel, but I still really like my Shapeoko.

So I do something kinda similar, I’m using a secondary wasteboard on top of the one that came with the machine. I drilled it full of holes and put those threaded inserts into it, it works, but it always manages to irritate me in myriad ways. I’ve kinda been thinking about moving over to a T-slot board like this (except made from aluminum)

What I did, is I have a large selection of screws, in 1/4" increments, and I use those for work-holding, this generally avoids the tool hitting the clamps as they all sit much lower. I’m also using delrin or PVC for my clamps as it’s a bit more rigid than the MDF/plywood. and I’m only using 3/8" thickness.

Over-all, I like your design, and may steal it.

Thanks! I am curious the method you will choose to cut t-slots in aluminum. Seems like a tedious task.
Yeah, Thinner clamps would help. I have some 1/2 europly I might try. Is there a good place to buy pvc sheet material like that online? I live in the boonies and don’t have many options when it comes to shopping. I guess I could always melt plastic bottles

Mcmaster-carr will sell you about anything you want, and do their damned best to put it wherever you want it on the face of God’s Green Earth.

There’s a plastics place up the street from me, I regularly raid their rems pile. If there’s something specific you’re looking for let me know.

Thanks, I’ll have to look them up.

If you don’t want sheets, PVC “lumber” is available at most home centers — it’s foamed or something, so is lighter weight than it would be otherwise — I used it in-between the T-track on my XL upgrade:

Oh yeah, I think I have seen that stuff. Nice.

Will, why am I not surprised that you have a hand-crank drill/driver in your photo?

Is the HDPE sandwich around the router mount for vacuum or holding pens or drag knives or something?

Thanks, I think. I still want to get a JointMaker Pro, and one of these days I’ll manage to get a post/beam drill, and I also have a brace which my father-in-law was kind enough to give me before he passed, and I have since managed to put together a fairly decent collection of bits.

The HDPE sandwich is the frame for holding a vacuum wand and the bottom of it has 3 magnets for a dust shoe — I’m revisiting this design and will hopefully have a nice new one which is more adaptable presently.

And 'cause I can’t resist, my latest haul: I always forget they’re called bit-braces… I have a good friend who is all about the classic tools who was in the process of making his own spinning wheel and loom last time I caught up with him, and who collects those kinds of tools too. It was a compliment, it just shows your personality coming through and makes for a fun comparison… having a bit-brace sitting on a CNC machine

But getting back on topic, how are you anchoring the vinyl-board between the tracks?

@J20jeepster what track system did you cut your grooves to fit, or did you get that t-slot plywood that way?

Sorry, sometimes I try to be funny and fail miserably.

Actually, a bit brace is a different tool — you were correct in your original description of the one in the photo as a hand-cranked drill (and I also have a “Yankee” screwdriver/drill, and there’re a couple of gimlets in the open toolchest I have of my Great Aunt Annie Mae’s bridge partner’s husband who was kind enough to put up with my hanging around his shop when I was young, as well as an Archimedean one) — if anyone is curious about the latter we actually have a link to plans for making one’s own at: http://www.shapeoko.com/wiki/index.php/List_of_Tools

The PVC lumber is just slip fitted in-between the T-track — I figure the force of clamping material will hold it in place well enough — didn’t seem worth fastening, and while I’m hoping to avoid cutting it, I figure that’s pretty inevitable, so wanted replacement to be easy.

I kinda made up my own track system. I really did not know they sold ‘systems’ I just thought; “hay, I could cut grooves in my plywood with this t-slot bit and by some bolts that fit” lol This is the bit I used: http://amzn.to/2lGgzUa I also have the link for the video up there ^ on the original post.

There’s a guy on Youtube who made up a friction clamp system. That clamps pressure to the sides of the piece and doesn’t go over the surface.

Clamping Idea - anyone tried this? Shapeoko

Saw this as a clamping system, looks pretty good. Anyone tried this? How did it work out?

I’ve made similar using cams I made from Corian, but in the end I use regular clamp style and my threaded table more, or in addition to these. Main reason being is they clamp well from the sides, but they don’t always keep the stock flat and the router wants to lift them. I saw where he added sandpaper to the sides of some of his clamps for better gription, but I still wouldn’t trust it for anything but very light cuts in soft material. This cam style works great for squaring up stock to the bed though.

That type of clamp works much better if the outside end (with the block under it) is a little higher than the surface of the stock so the lever arm can tilt down - then you’re gripping with the toe (hence the name…toe clamp) instead of some midway point right on the edge of the stock.

Sorry no it was an young English guy I think he used piecesome of copper pipe. It based a dogstops

Nice clamping system.
If you feel you need more height in Z, why not mount your Makita router higher up? It looks like it’s as low as it can sit in the mounting bracket… (my Dewalt is strapped in about halfway up; or does the Makita prevent you from mounting it any higher?)