My introduction out of the way

Hello! Not sure if introductions here are a thing, but figure it would be a good way to break the ice for me.

I haven’t been a long time owner of my Shapeoko (April '18) nor have any professional workshop or machining background. I just love learning tech and making things, be it on the computer (I am a software developer), 3D printer or recently with the Shapeoko. I mostly have designed and made parts for the machines I have, the growing hobbies (RC, Photography) that burn holes in my pocket or my motorcycle down for the winter.

I eventually want to adventure into aluminum, to fabricate parts for my motorcycle (particularly working on a dash for the additional accessories installed) but at the moment been prototyping in HDPE. I used this as an excuse in getting @Luke’s famed HDZ, along with some other Black Friday upgrades (I could easily be diagnosed as what someone in the photography world would call “GAS” - Gear Acquisition Syndrome).

In the process, while testing pins on the Carbide Motion Controller board (was working on installing new home switches and [additional] spindle control) I believe I sent 24v into a pin that couldn’t take it

(POP!). So, yet again used it as an excuse to do one more upgrade, with quite the steep learning curve I have found! I decided on replacing the board, that is Mach compatible and ended up on something different than most (i.e. SmoothStepper or UCxxx), a PoKeys57CNC. I just finished getting Mach4 and the PoKeys controller working smoothly, and still need to dial in steps/unit. Also, still need to design a controller box and interface, along with rearranging wires

I think ppl share photos of their machines as if it was their kid, so… 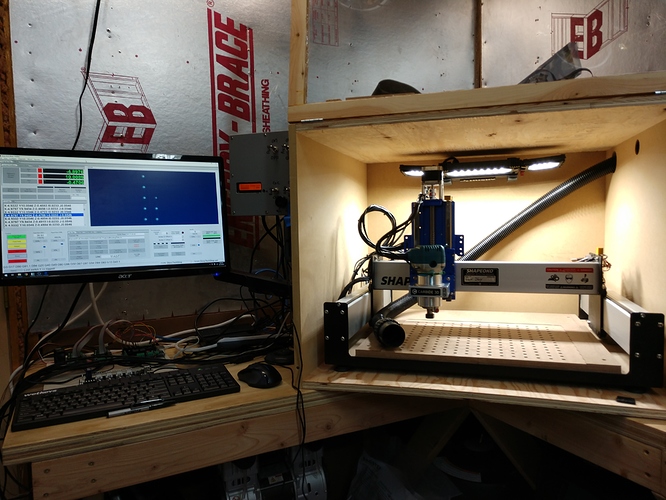 That is awsome! (And welcome aboard!) Would be interested to know your impressions of the Pokeys57cnc once you are fully up and running!

With no experience with the other contenders, I am pretty impressed with the functionality.
I think the troubles I did have was just inexperience with Mach and some unit conversions.

To get off the ground, I just decided to go with their lower tier stepper drivers (PoStep25-32), it has the amperage rating to cover the Shapeoko’s stepper motors (and less hit to my budget). They have a more advanced stepper with wider amperage range (PoStep60-256) also with software-based configuration (+1), of course you can bring your own too; just wanted something plug 'n play for the time being. With the PoStep25, @2amp and mixed decay, it has introduced more stepper noise (particularly when holding) but might get better with more adjustments.

My first stumble was trying to convert Shapeoko’s default units/step, velocity and acceleration values for Mach4 to use (https://docs.carbide3d.com/software-faq/shapeoko-3-default-grbl-settings/). I gave up and just switched to metric on Mach4 for the time being. As I type this, I think I realized what I was doing wrong…

While steps/mm needs to be multiplied by 25.4 for steps/inches, I was doing the same for velocity and acceleration!

Second stumble was the spindle control/enable for the SuperPID. This was a combination of inexperience with Mach, and PoKeys documentation wasn’t 100% clear for me. By default it has a 0-10v pin for spindle control, but SuperPID only has 0-5v or PWM input, you can get away with a couple resistors to get the 0-10v down to 0-5v but I had already had the SuperPID wired for PWM from when I was using it on Carbide’s Motion Controller. You can enable PWM for the spindle control with PoKeys, supposedly overriding the 0-10v pin (#17) but I couldn’t trust it as my voltmeter readings were telling me otherwise. So I decided on pin #20, however I still wasn’t getting good test readings, which came down to I hadn’t fully setup the spindle Min/Max RPM in Mach4. After that I was able to get the PWM spindle pin working with SuperPID, an additional pin for Spindle Enabled, and also as an added bonus, Tach out from the SuperPID to a PoKeys’ super-fast encoder (index mode). So, Mach4 can read out the spindle’s RPM too 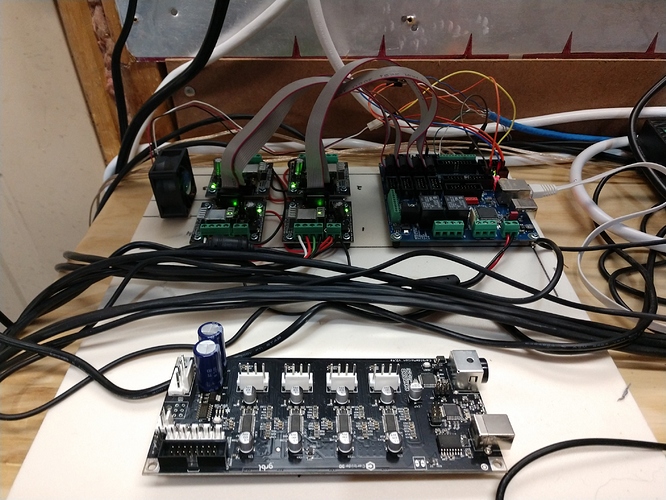