Need some ideas for an old shapeoko 3

So I had bought an older shapeoko 3 still unopened in the box. It is an early version so it would have needed quite a few upgrades to be up to date. Instead I bought a shapeoko pro xxl. I love this machine but now have this older 3 standard that is just sitting in a box. I don’t really know what the best thing to do with it is. I was thinking about selling it but I also thought it might be interesting to see if anyone on here has some ideas. If you had an older shaoeoko 3 standard size to tinker with what kind of things would you think of trying?

Could add a laser, or a drag knife?
Pen and make a plotter?
Make a ceramic extruder?
Put a hot plate on the base and make pancake drawings?

Really if you get the hdz or zplus you’ll get the proximity switches, and I’m fairly certain you could make the bigger belt upgrades. Heck if you get an upgrade rail kit you’d just need to modify the x axis belt holes. All that and you’ll basically have an up to baseline machine. The board may be an older board but something support could check to see if you actually need an upgrade on.
Out of the box it should still be a pretty great machine and still have resell value.

Edit: I think there was a wiki article (maybe Will knows where it is) that went over alternative uses, like 3d printers or whatever, but I can’t find it.

Edit 2: if you are near Portland, Oregon I know a person looking to get into CNC if you want to sell it.

Make a water table for it… CNC plasma cutter?

The standard size SO3 I have at my mother-in-law’s is going to be used for cutting tropical hardwoods because it’s on a folding/rolling stand:

Need a folding stand for your machine? Shapeoko

This was posted about again at: and I finally got around to putting together the one I bought: [20210704_1022481] Mounting it was simplicity itself — just needed 4 M5x30 BHCSs, and 4 washers from the stand hardware supply, and 4 M5 washers and 4 M5 nuts — for assembly you’ll also need a 10mm socket and ratchet. Next up is working out mounting the power supply and working out a way to secure the USB cable and other accoutrements.

(need to get a second one for my SO3 at home)

a drag knife is a great idea, but my inclination would be to sell it.

Converting to a 3d printer is covered at: RepStrapOko - ShapeOko — while it works, buying a 3D printer makes a lot more sense.

Bringing the machine up-to-date is a matter of:

I have enjoyed upgrading my S3, learned a lot along the way. Here are before and after photos. Is still a work in progress… 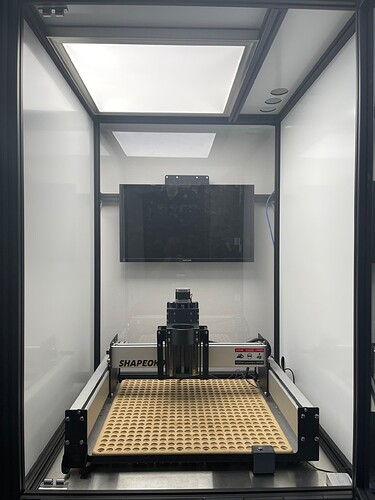 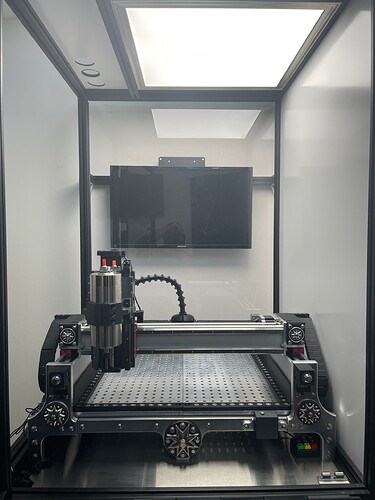 What the others said, use it or sell it.
I’d rail it, HDZ it, keep the belt drive and slam an aluminium baseboard on it.
Use it as a metal

or give it to a nephew/niece, as a trick to spark interest in technical/scientific matters.