Carbide Create doesn’t have a feature to do text on a path — use Inkscape instead, convert the type to paths, save as an SVG and import that into Carbide Create.

Thanks I will do some research and find out what Inkscape is.

They say a picture is worth 1000 words…training videos are worth 1,000,000…I learned a LOT regarding the CAD and CAM (Carbide3D) software:

Are you looking to do curved text?

Yes exactly. Would rather not have to download and install additional software on my wife’s Mac book.

Curved text is a pain in the @$$. Your choices are to install 2 pieces of software on her mac (Inkscape (InkS) and it needs XQuartz to run)…and I don’t fine InkS very user friendly…Plus yo need to convert into a SVG then import in into Carbide…OR you can do what I have done in Carbide Create (CC).

Type out the individual letters, and adjust the rotation of them… and then move them onto a circle…not elegant, and it’s usually a LOT faster until you master InkS…or combine this with not using it often enough that yo need to relearn it all over again…

Doing curved text in Carbide Create would be tedious in the extreme.

On a MacBook your best options would be:

There are some other vector editors for Mac OS X, the community has a list (possibly incomplete) at: https://www.shapeoko.com/wiki/index.php/Commercial_Software#Mac_OS_X

Thanks guys this is already gettin too complex. Can this be done in v carve? Might be worth the investment if I plan to continue this.

Not seeing an option there, but I’ve only used Vectric once.

It’s quite simple to do in most programs which have support for the feature — Inkscape does, but it may not be easy to get to run on Mac OS X (last time I checked you had to install XQuartz):

Simple enough to do in Carbide Create as well, just a bit tedious:

If that seems too complex, consider that it wasn’t that long ago that one had to pour Plaster of Paris around metal type to do this sort of thing, or manually cut apart the printed letters, paste them up, then photograph them with a stat camera, or letter such things by hand.

Thanks guys this is already gettin too complex. Can this be done in v carve? Might be worth the investment if I plan to continue this.

V-carve can fit text to a curve. You start with something like this Then use the text on a curve tool 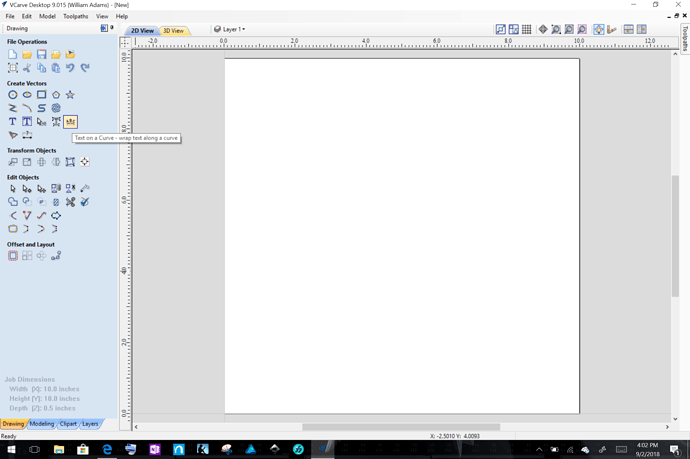 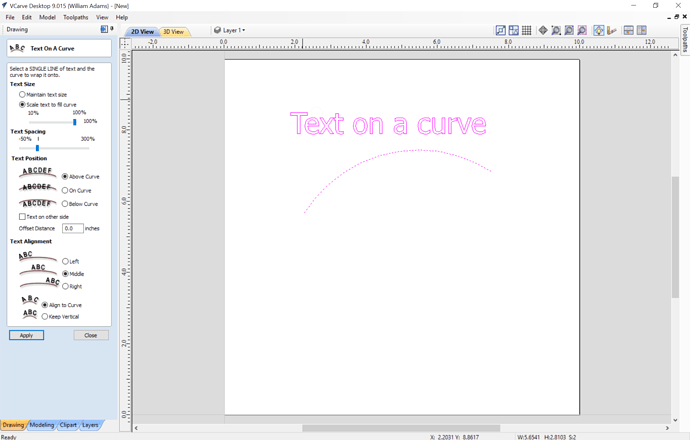 One issue with switching to Vectric is that it is a Windows program — you’ll need to use Boot Camp or Parallels to run it — are you sure it wouldn’t be easier just to try Serif’s Affinity Designer?

Thanks not sure of anything yet just looking at software to see what is possible and how steep the learning curve is.

I’m running Vcarve trial version successfully in VMware Fusion but I already had Fusion on my laptop.

I do all of my design work in CorelDraw then export to an SVG and tell Carbide Create how to cut it. It’s an outstanding program and not terribly expensive. I use it extensively to create vector images from bitmaps, as for with a company logo (when a vector graphic is not available).

Thanks but unless I am missing something Corel Draw isn’t compatible with a apple MacBook. I am about to give up on ordering a cnc machine because the design process shouldn’t be this difficult.

You can design using any Bézier curve / vector editor. Notable options on the Mac:

Them and a couple of other apps are listed at: https://www.shapeoko.com/wiki/index.php/CAD

Serif’s Affinity Designer is quite nice, but is a commercial app — it and a few other options are listed at: https://www.shapeoko.com/wiki/index.php/Commercial_Software

If you’re inclined to try it, I think you’d like Affinity Designer.

Affinity designer looks really promising. I may download the trial version tomorrow and try it. I also like that you purchase the software and don’t just lease it. Also the price is hard to beat. I assume that you do your design, you export it to carbide create to create tool paths. Thanks for the assistance.

Just for reference, Fusion360 is free for hobbyists and commercial under $100K. It’s amazingly capable, but quite a learning curve. Probably a lot more than you need right now.

Trying affinity trial version and have drawn what I wanted without too much pain but not sure how to get it into carbide create. Tried exporting as svg but that only shows up as a small icon of the graphic I inserted. With none of the circles or text. May also look at fusion 360.