Working in Carbide Create, I’m trying to edit a vector that’s currently a full loop. I want to delete several segments of it and then use the remaining segments to create my toolpaths. From what I’ve read there is a Cut Vector command in Carbide Create, but I can’t get it to come up as a choice. If I click on a node and then click Node Edit my only choices are “Delete Node” and “Toggle Smooth” (see top screenshot below). From various web searches I see that some users get a third choice, which is “Cut Vector”. The second screenshot shows what I want to do, which is eliminate segments A, B & C. I need to be able to cut the vector into pieces in order to delete these unwanted segments. Anyone run into the same thing? I’m stumped and would appreciate your input. 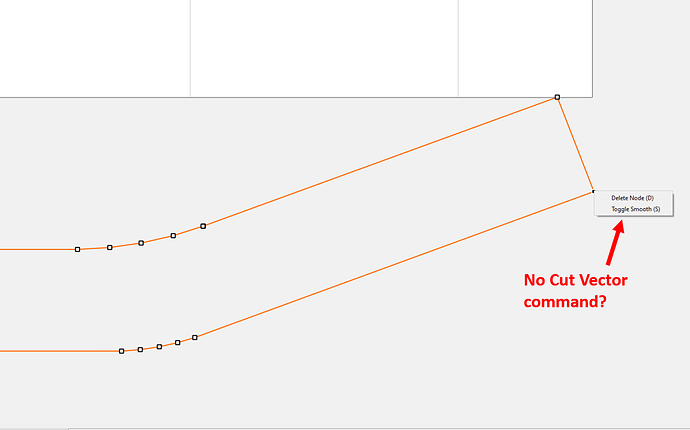 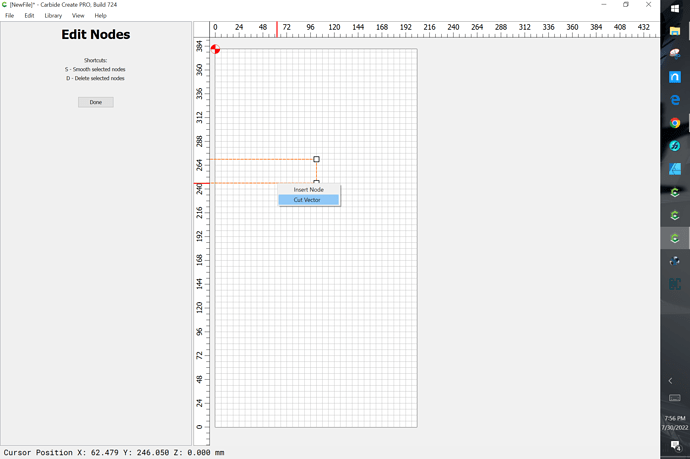 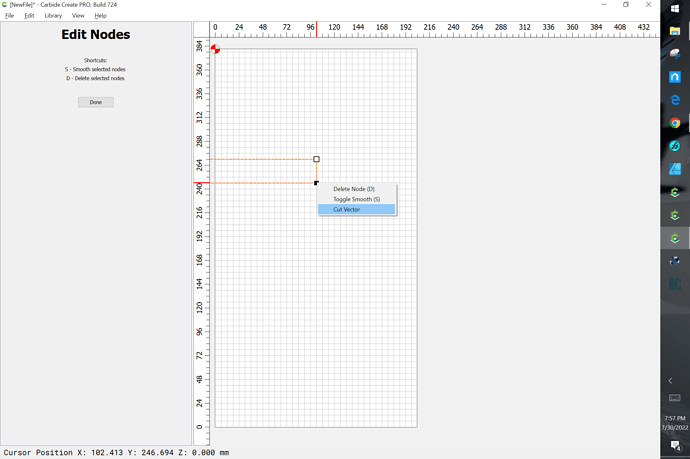 Hi Will - my God, man - do you ever take a day off?! You seem to answer everybody’s questions no matter the hour or day of the week. Yep - I’ll post the file when I get home. Might it have anything to do with your using Carbide Create Pro, while I’m using the standard version? I did try it using the Pro trial version that doesn’t let one create toolpaths, but there was no difference. Thanks for your response.

Please see the attached files. One is the Carbide Create file I was working with when I wrote the question. The second (with the same name as the first) is the .dxf file that I started with (it was originally a sketch in my SolidWorks model.) The third file (Mike Marner Lathe Mill.c2d) was created for me by a fellow forum member (Tod1d) a few weeks ago. Tod is very knowledgeable and has been incredibly helpful, but he doesn’t seem to be around this weekend. I believe he created the file entirely within Carbide Create (i.e. he didn’t import an .svg or .dxf). To confirm I haven’t been able to get the “Cut Vector” command to show up working with any of these files (or any others). The one I really want to get to work, because it’s the real shape I need, is the 13.5 in disc dxf trial, July 30 2022 shape. Thank you.

I get a cut vector command when right-clicking using build 724: 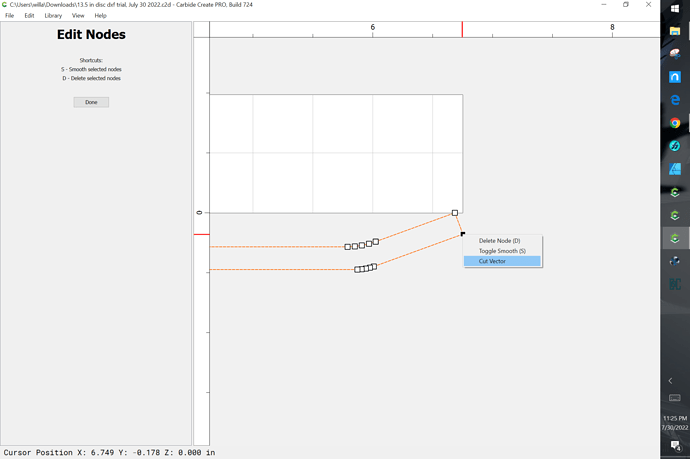 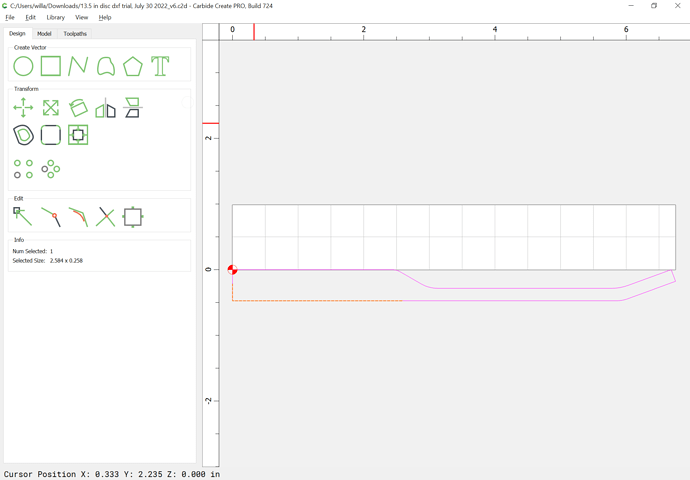 Here’s the file cut at the requested points as a v6 file:

Ah, that explains it - sort of! You still seem dedicated above & beyond. But please know I appreciate it - a sentiment many here share, I suspect. Well, let’s see… I’m on Carbide Create Std Version Build 530. Do I need to update?

I’m not familiar with a V6 file. What does it mean? I opened the one you sent and can see how you cut it - but my system still wouldn’t let me.

If it’s a closed vector it is likely already cut at that point so there are 2 end points there. Try to cut a different point, or try to move that point to see if it’s already cut there

The big thing on time is that we understand many folks can only use their machines evenings/weekends/holidays, so do our best to staff the support queue during those times.

The Cut Vector command was added in build 627:

You should be able to download v6 alongside v5, so long as the programs have different names (this has to be done manually on Mac OS)

You may want to try the new v7 beta as well (I’d be sure to install v6 just to have it):

We’re releasing our first public build of Carbide Create V7 today with a lot of big changes. The download can be found at: https://carbide3d.com/carbidecreate/beta for those that want to try it out. It includes major internal changes but our testing has shown it to be stable so we’re ready to share. (That said, we’ve changed the file format to support all of the changes we’ve made so please give it an initial test on a non-critical project.) And now, on to the changes… Tabs are now a part o…

If you do install multiple versions, and the new V7 beta, be aware that your OS’s “file association” will probably change, often to match the version you most recently installed.

Hi Tod - thanks for the reply. I had tried about everything I could think of to manipulate the vector, but no dice. That is, I had tried other points all over the vector - not just those out near the right end. No matter where I tried, I couldn’t get the Cut Vector option to show up. I also tried to drag those right end points, but they just take the vector with them. See screenshot below for an example. From what Will Adams is saying this morning I gather the Cut Vector command wasn’t added until a later version of Carbide Create than what I’m running. I’m going to use the link he provided to download Version 6. I’ll post the results once I’ve done so and tried it out. 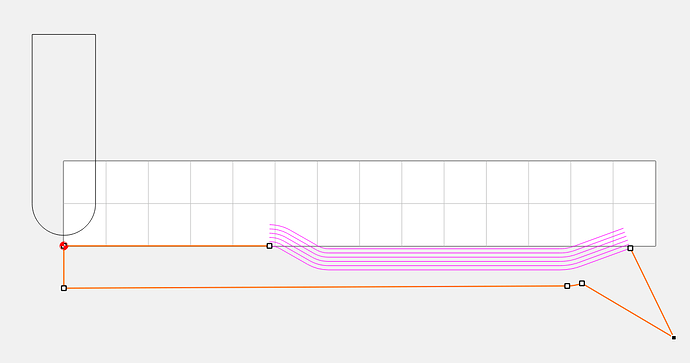 Thanks, Gerry. I’ll make note of that.

Thanks, Will. I’ll use the link you provided and download the later version. I’m a little confused by the V and Build designations though. Is it akin to SolidWorks where they have Versions and then “Service Packs” of those versions? For example, I’m using SolidWorks Version 2018, Service Pack 5.0. The Service Packs are updates to the base version. (There were five for 2018, then it went to SolidWorks 2019, Service Pack 0.0). So, using your link it looks like I’ll get Carbide Create V6, Build 652. Is that right? There’s no mention of V6 in the download screen (though V5 is mentioned). See screenshot below. 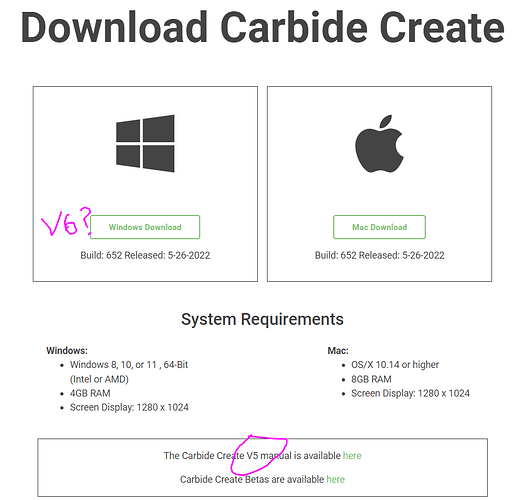 Yes, the writing team hasn’t gotten around to a new official manual.

I’ve been writing a bit about Carbide Create at:

If there’s something you want to know about the program which isn’t covered there or at:

let me know and we’ll do our best to look into this w/ you.

Thanks, Will. The software update did the trick. I now have the Cut Vector command! Also, you’re wise to note that many of your customers only have time to work with their Shapeokos evenings, weekends, and holidays. That’s exactly the case for me. Thanks also for the links you’ve provided above. I have bookmarked and them and perused them a bit. They look like a great resource, and no doubt I’ll be consulting them in the future.