Hi everyone,
I’ve done quite a bit of machining in aluminum with my nomad 3. With the 1/8 end mill, everything is going quite smoothly but when I’m trying with the 1/4 end mill things get quite complicated. It’s seems that I really need a small DOC because if i’m going too deep the spindle just stop rotating (ie. 0.1" doc and 0.05 opt load which is taken from a winston video on milling alu). Is it a limitation of a 150W spindle? I’ve heard that I could use the shapeoko Speeds and feeds for my nomad but the shapeoko seems to be running router of 1 hp or more which is a lot more powerful than the nomad! Is that why i’m struggling with the 1/4 end mill in aluminum?
Thanks

As a retired machinist with 40+ years of experience I can tell you that the spindle motor does not have the necessary torque to run a .25 EM and expect good results.

Larger tooling in the Nomad is only recommended for use on softer materials — even when we face off the bed as part of commissioning/calibration we use a 1/8" endmill.

Wherever you read that, it’s very, very wrong. A typical router used on a Shapeoko will have at least 600W of power (i.e. 4x the power of the Nomad 3) and be able to handle higher MRR cuts as a result.

Take the Shapeoko DOC and divide it by 4 and you’ll be closer to something reasonable for the Nomad.

It’s seems that I really need a small DOC because if i’m going too deep the spindle just stop rotating (ie. 0.1" doc and 0.05 opt load which is taken from a winston video on milling alu)

In my experience with the Nomad, what you want is 60-100% stepover and however much stepdown you can get without the machine making unpleasant noises. The Nomad, at least the 883 Pro, does not do well with high-axial, low-radial toolpaths.

Back to the 1/4" question, I’ll disagree to an extent with @Damon2021 and @WillAdams. 1/4" tooling can work on the Nomad and can even work better on the Nomad than 1/8" tooling. In particular, the increased diameter means that at a given RPM, the surface speed is higher and the cutting speeds are reduced. It also means there’s more space in the flutes for chip evacuation.

On the first point, here’s a cut with a 3mm endmill: 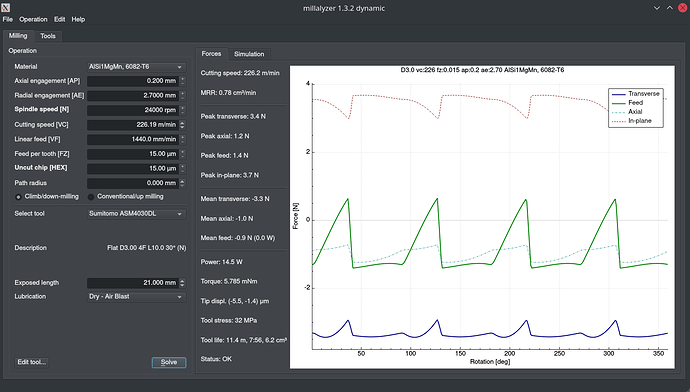 And here’s the exact same cut with a 6mm endmill: 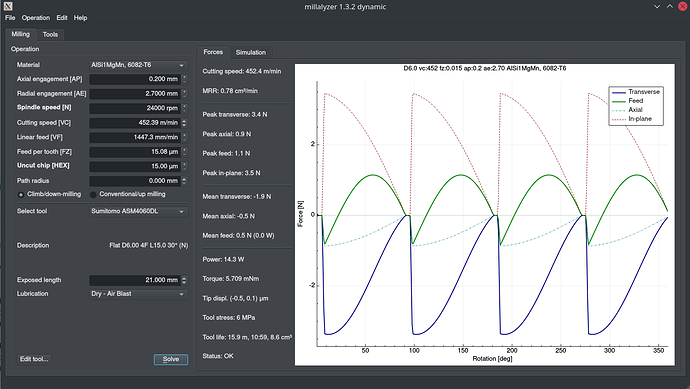 You can see that with 2x the endmill size, the mean cutting forces are cut nearly in half, the tip displacement (deflection) is reduced 10x and the tool stress is ~1/5th of what it was.

However the peak forces, torque and power haven’t changed a whole lot and those are the limiting factors on a Nomad. Using a larger endmill won’t help you overcome them. You won’t get higher MRR just from using a 1/4" endmill.

Where I think 1/4" endmills make the most sense on the Nomad is multi-flute endmills. A 1/4" endmill has more space in its flutes for chip evacuation than a 1/8" endmill so I think, for example, that while you wouldn’t want to use a 3 or 4-flute 1/8" endmill without a serious setup for chip evacuation (e.g. flood coolant or multiple air blast nozzles), you could absolutely use a 3 or 4-flute 1/4" endmill. The higher flute-count will help you get higher MRR (since you can bump up the feed rate), even if moving up to 1/4" on its own won’t.

The higher flute-count will help you get higher MRR (since you can bump up the feed rate), even if moving up to 1/4" on its own won’t.

And to elaborate on this point a little, here’s a cut with a 2-flute 3mm endmill: 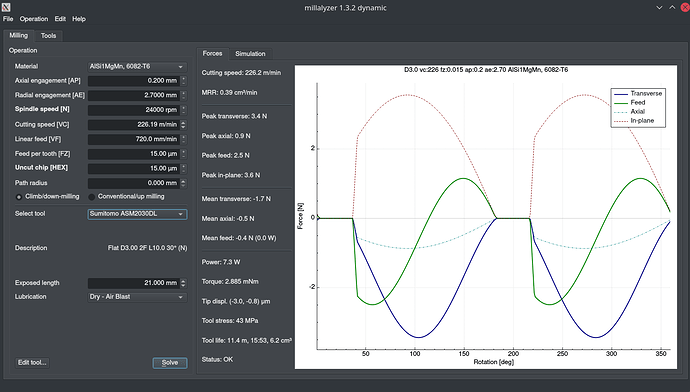 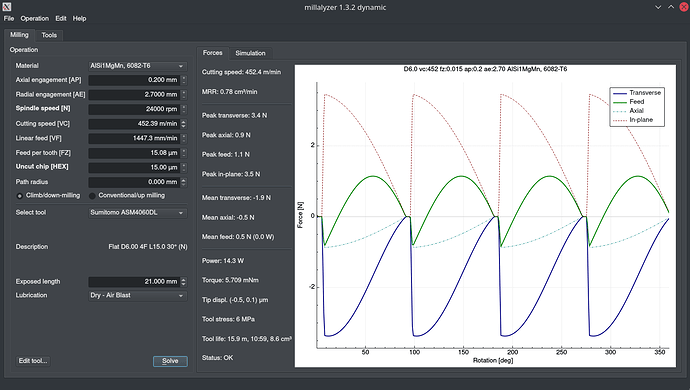 You can see that the cutting forces have barely changed at all but the torque and power have both doubled. On the Nomad 883 Pro, I usually ran into issues with machine rigidity (i.e. I was limited by cutting forces) long before I was limited by the spindle power or torque, so the larger, higher flute-count endmills were usually a win, since I could get higher MRR with the same forces.

I don’t have any experience with the Nomad 3 though so I can’t say for certain that this is also applicable there. It could be that it’s a more rigid machine and the spindle is the limiting factor more often than not.

Thanks a lot for all your answers. I did not know that the spindle power would be such a limiting factor. If there is any upgrade I could do to have more power that would be great. I’ll try to stay updated.

I’m doing a lot of small aluminum parts but everything is going fine with the 1/8 endmill. I was just checking with you if using a 1/4 EM would give me more MRR but it seems that with the spindle limitation I might be better sticking with the 1/8.

As I said, the limitation on MRR, at least on the 883 Pro, wasn’t the spindle but the machine rigidity. A 1/4" tool with multiple flutes will give you higher MRR because it uses more power while keeping the cutting forces low.