I periodically get this error 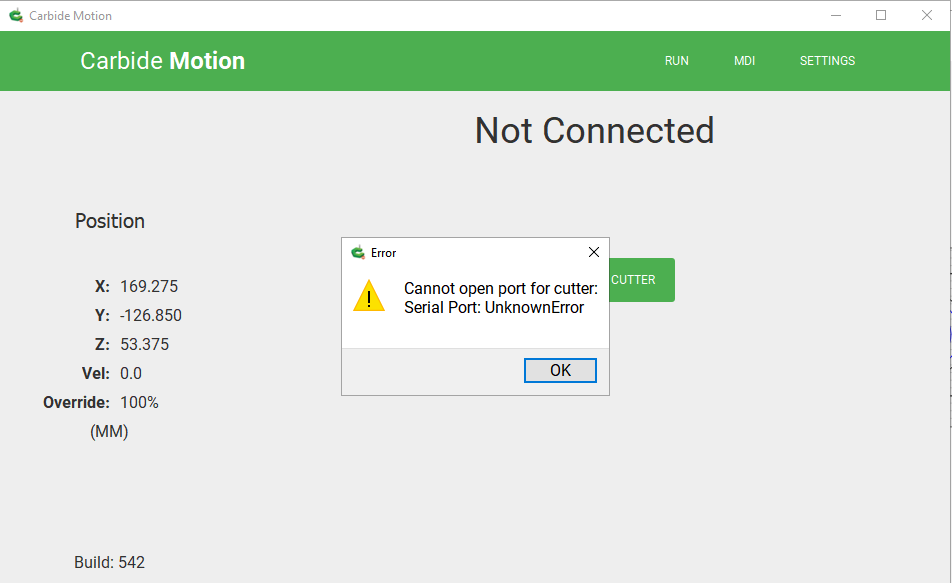 Screenshot (1)952×583 14 KB
It usually happens when I’m navigating Carbide Motion jogging. It has happened after a job ended and once it occurred during a job. In the latter case, it continued presumably to finish the commands it received.

After dismissing the dialog, I can not connect any longer. Restarting the carbide motion and my computer don’t fix this. Only restarting the S4 remedies this. So far it rarely happens to my job, but it is a nuisance and wonder if this is symptomatic of a deeper problem or just simply a glitch I need to learn to live with.

I suspect it’s a problem with the USB sub-system.

Try making a new account w/ admin privileges and see if the error happens in that account.

@mhotchin For some reason that didn’t occur to me. I’ll give that a try.

If a different computer/cable doesn’t resolve things, then it’s likely EMI, let us know at support@carbide3d.com and we will do our best to assist.

The most bizarre thing happened the last time I had to cycle the power due to this error. During initialization with the bitsetter, which normally moves quickly on the Z until the last few mm when it slows down, it moved slow the entire length of the probing cycle. It’s like the Z got out of whack. After the first bitsetter probe completed things were back to normal.

EMI is consistent. Definitely happens most often just when I’ve powered off the spindle possibly causing a voltage spike.

OK, how is the power to the spindle routed? If it’s near any of the Shapeoko wiring, can you separate it temporarily to see if that makes a difference?

@mhotchin. Physically the power to the spindle and the S4 are on opposite sides of the machine, but they are both connected to the same extension cord (S4 via another extension core). Though I do wonder whether a voltage spike through the power line should effect the S4 controller as the controller is DC and powered through a transformer and rectifier, though anything is possible.

Plus one time this happened completely at random during a job and I believe it has also happened when I’m doing design on CC when the spindle is idle and the S4 is just sitting there.

I contacted support, they gave me a list of things to try, but my suspicion is that I’m getting interference through the powerline, rather than static build up or EM waves through the air.

I had thought the DC power supply would protect against this, but I found out modern power supplies no longer use the classic transformer, rectifier circuitry (presumably for both cost and durability) which means interference could traverse the power supply to the controller.

It’s well known the powering on and off of an inductor can cause spikes or interference in a power line. (That’s why quite often old incandescent light bulbs often burnout when you throw the switch or you see a blue flash in your light switch when you turn a light of).

Switching to another circuit in the house helped mitigate the problem but did not make it go away. This is probably due to the fact that AC wiring works as a transmission line (that’s why power is delivered to the home using AC not DC), so even though I distanced the power source, there is no true isolation of the power.

So to provide cleaner power, on a friends recommendation, I bought an EMI/surge protection power strip that was engineered to reduce interference for sound systems. It’s been about two days worth half a dozen small projects and probably 10 times turning the power on and off of my dust collection and no occurrences. Cross your fingers, but I think that’s the solution.

I know this was a bit long winded, but I always feel better about a solution if I know the specific cause.

One of the longer support efforts was one where it turned out the transformer feeding power into the user’s neighborhood was going bad — symptoms were disconnects, and compact flourescent bulbs having very short lifespans.

Glad to hear you found a good solution — we’ll have to keep that in mind.

There is also the option of using a UPS (uninterrupted power supply) to power the shapeoko controller. These help with not only power outages, but also help with under/over voltage conditions as well. Almost all the electronics in our house is powered through one for the exact reasons being mentioned in this thread. (e.g. short bulb life, electronic errors, etc.)

UPS are among the best at power conditioning and I had considered one, but I don’t need one for the S4. So I opted for the less expensive EMI suppression for sound systems as sound systems are particularly susceptible to line interference.

Actually, any consumer UPS usually isn’t any better than a surge suppressor at conditioning - until the power goes off (or way under / over volt), then the power is straight through from the way, with conditioning (such as it is) supplied by the same devices as you’d find in a surge protector.

The APC branded ones we use at work click over to battery quite often and we have excellent power quality (relative to most residential areas). I think the default range for the units is 12 volts +/- from 120 volts. If you install the software that comes with them, most can be set as low as 6 volts of variation. These units usually run between $90 and $120 for the size we buy (500-600 VA range).
How much are the line conditioners? I thought they started in the $250 range. If they are a similar price, I might get some of them as well for other equipment that isn’t on a UPS.