I am still fooling with the box for my 3HP VFD.

I was thinking it would be nice to have a switch on the hot 110 wire, so I could leave the VFD plugged in. It would also allow me to put a fuse on the enclosure. The VFD has no off switch, so it sucks electricity even when it’s not in use. It seemed like to be able to turn the AC supply on and off after shutting the motor down. The in-rush at initial power-on of a VFD whose capacitors are charging creates a extremely sharp current surge that can weld contacts on a switch. Ask me how I know.

Does anyone know how much stress a VFD will put on a disconnect switch at startup? Any recommendations for a VFD powering on and off? 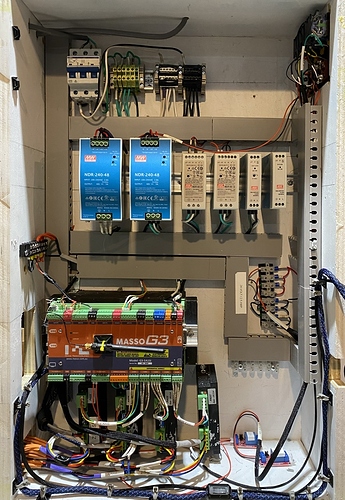 Cool, a few thoughts here; welding a contactor closed at startup seems unusual, are you powering up with the drive enabled and some speed being commanded? Switching the contactor closed under load like that would be a recipe for welding. Best practice is give a VFD at least a few seconds to power up before they are enabled and a speed is commanded. If you are not starting up with the drive enabled, most likely the contactor was just undersized for the application. Alternatively, on big industrial drives you might consider putting in a precharge resistor circuit to limit in rush current but this likely outside the scope of anything someone would put on a Shapeoko.

On an AC drive like this, the drive itself should handle all the precharge, if any.

can weld contacts on a switch

Of course, the easy answer is us an properly rated switch.

During the welded contact incident, did the circuit breaker weld also? If not, there’s your switch capacity answer.

I’m using a CJX2-1810 contractor on my VFD. I wired it so that if power drops or “browns out” that it’ll not turn back on without manual intervention. Also since my laser mounts in the spindle chuck; it has an interlock to remove power from the spindle when the laser is switched on. 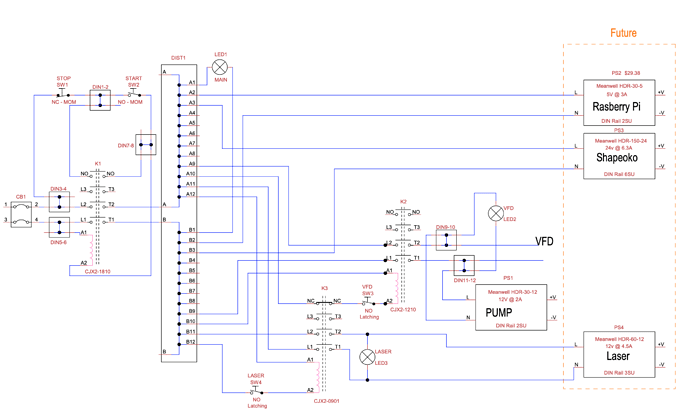 I unplug and plug in my VFDs for my RAS and my Lathe. No switch. I’m lazy and cheap.
220V VFDs, and roughly 1 1/2 hp motors being driven. Nothing is powered on when the VFD is plugged in. No issues. As long as any switches downstream are off when you power up the VFD, there should not me any ‘welding’ of anything. VFD should realy be allowed a minute or 5 to get fully powered up and ready to provide power to your spindle. Any switch rated for the amperage of the VFD input would be fine.

Oh, I forgot my new DC (new to me) it has another 2 hp VFD that I wired into a forward and reversing switch I had laying around. (both sides wired so it really doesn’t reverse, just mechanical contacts) Again, no welding.

Ah ha! DC brings up another point. Don’t try to switch the DC side of any high current device. Always switch the AC side (the power in side.)

It takes a special switch to interrupt high DC current, because there isn’t the reversing cycle to help extinguish an arc.

Thanks all for the feedback. Turns out I have a leaky ceiling in the garage and water got into the VFD and that’s what caused the orc. Thank God I had my original set up connected to an overload relay and GFI Circuit breaker.

Like @wb9tpg I am using a contactor (GE Industrial MC1C310ATD). They are pretty awesome. Heres a link to my build My new electronics enclosure