One for the woodworkers. Why are festool so popular?

A vague question, I have heard allot of good things about festool dust extractors. Needless to say I got involved and bought one.

I found the build quality to be very good, but no better than my 10 year old, £50 henry, and this was 7 times more that my Henry - when on sale…

Suction is on par with the henry which has never seen a fresh bag.

I like the added power socket that turns on with the DE, and power levels are cool all be a bit of a novelty - you can’t not have enough power. Mine also has an optional bluetooth for a remote you can buy ontop (something I have on the henry through a rf relay socket)

Needless to say I’m a little undewheleced. What am I missing?

Festool is a system of dust extraction which works on multiple tools, and with Systainers to support them, everything clicks together like Lego bricks.

They also make a unique tool which affords capabilities not really matched by other tools:

and have nice tools on par with the best in the industry for others:

Note also that the Bluetooth integrates the dust collection with the tools wonderfully.

(and I say this as a person who only has a Festool CT Midi — it has the Oneida Ultimate Dust Deputy on top and is wonderfully convenient thereby).

To be fair, the Makita track saw is quite popular as well, and I believe it can be made to work with the dust collection. Another upper end brand is Mafell — might be you’d find their stuff more impressive. For the full story, see: http://festoolownersgroup.com/

Needless to say I’m a little undewheleced. What am I missing?

Probably a few hundred quids from your wallet.

While I never owned one, I think that Festool are the Mercedes of tools and have a price to match. There is a bit of pride in owning one but I think that there are probably several other brands that provide similar performance but maybe less design and bells and whistles.

A lot of what Will said, the ‘system’ where everything works together so well. I’m a full time furniture maker and the Domino was an absolute game changer for me. I only own Festool Domino, Dust extractor and sander though. I think those are
the only things that they really have over everyone else.

I upgraded from a standard shopvac to the CT Midi.

I run it at the minimum setting, and it is far, far quieter than the shopvac, with more than enough suction. That was a big seller for me. The quality is decent, i guess only time will tell if it was worth the cost.

From what I remember from my research prior to the purchase, the festools are designed to run continuously for long periods, so over a extended use they should last longer… we will see.

Agree The System is a major part of what seems to attract pros. The extractor in addition to the sheathed hose & Plug-it connector, combined with the systainers nestled on top does benefit jobsite professionals.

I work in a jam-packed 12 by 10 shop, but have the ability to open double doors in nice weather and wheel my primary bench outside, then extend the 30’-ish hose out and it’s just simple & effective. 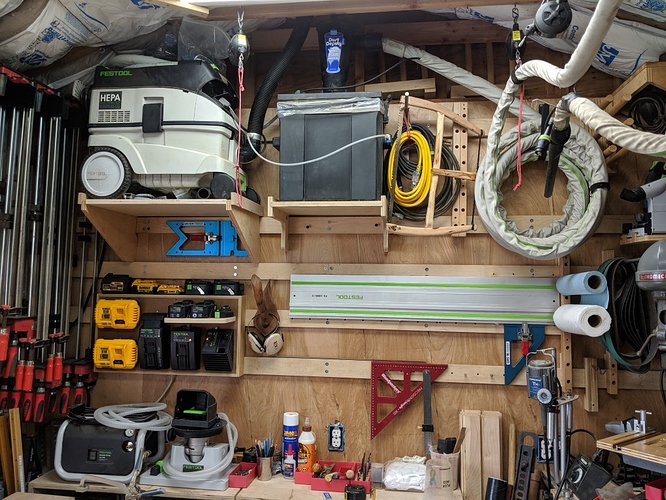 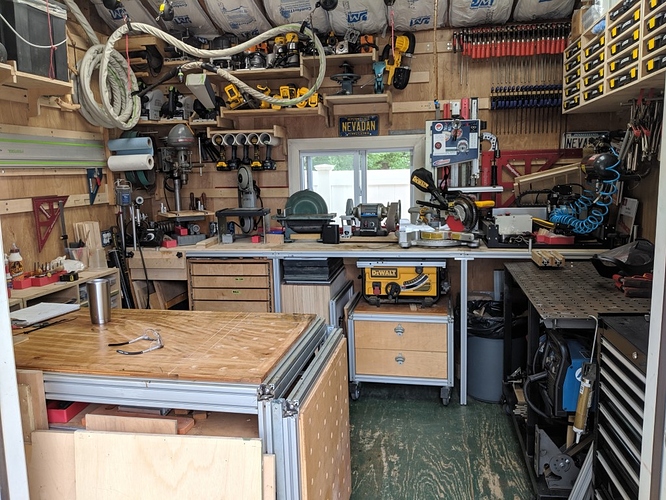 I’m heavily invested but my extractor is hung from the wall of the shop due to lack of floor space and connected to a dust deputy which basically eliminates the need to change the extractor bag/filter. The hose/cord is accessible from the overhead as well via strategically placed tool retractors. I pull all the tools from their systainers because they are not space efficient and I almost never leave the shop. It’s still nice to grab a tool, plug in power and vacuum, use it and then grab the next tool.

And in a small shop the track saws are really handy, especially with the aftermarket squares and guides. Tools like the domino as mentioned are game-changers. It’s a slippery slope…

FWIW, you can just see the SO3 in the RH corner covered with a layer of BS… This past week I got that corrected along with a major shifting of stuff around on the french cleats and it now looks like this: 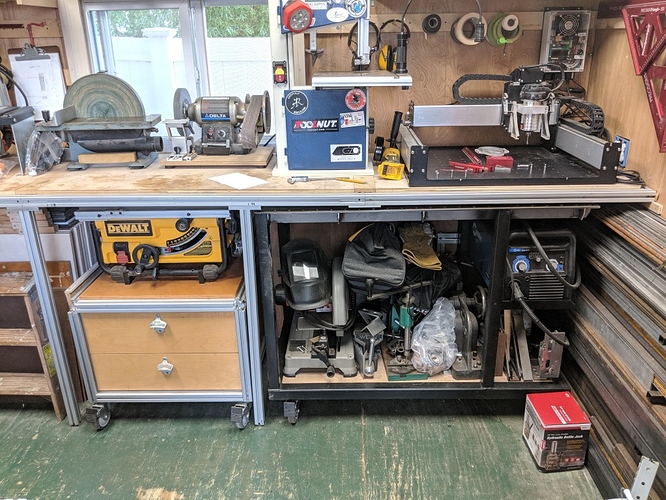 Slowly closing in on it being functional at all times. My idea of shop-nirvana is being able to use everything without first moving something else off the top of it.

My idea of shop-nirvana is being able to use everything without first moving something else off the top of it.

Yes! And finding the tool that you see all the time until you need it.
Glad to hear owning Festool isn’t the cure for this.

I found the build quality to be very good, but no better than my 10 year old, £50 henry, and this was 7 times more that my Henry - when on sale…

Comparing two very different levels of vacuums IMO. Dust extractors, like Festool’s, usually are $200+ due to OSHA compliance and HEPA certificates, revolving around the size and percentage of dust particulates it removes before exhausting. Along with duty cycle, suction, noise levels, warranty and all else the brand’s ecosystem (accessory, tools, attachments).

A video I referenced when deciding on the dust extractor/vacuum I wanted to buy, around performance (I went with a Makita VC4710):

finding the tool that you see all the time until you need it.
Glad to hear owning Festool isn’t the cure for this.

Actually, arguably Systainers are the solution for that:

I have both 5" and 6" Festool sanders and their mid-size vac too. They weren’t cheap but they are the go-to tools in my shop. I find the sanders are exceptionally well balanced and help keep my hands from going numb with extended use. I’d compare the finish of the sanders with 80 grit paper about equal to another brand with 180 or 220 grit. They are that good.

When you go to Woodcraft they have a dedicated display for Festool. I have looked at the track saw in the past and you could build a shop around the Festool tables and the track saws. The sanders are expensive but people really seem to like them. I would agree with Will that because everything works together it is a “System” instead of a bunch of discrete tools that do not work together. I have not invested in the Festool but always buy what I think are the best of breed for a hobby shop. The expense of Festool is 2 or 3 times an equivalent tool. They do have some unique tools like the Domino but if you buy into the Festool universe you need to go all in to get the advantages of the system working together. I can live without them but I am not trying to make a living with my tools.

So if you want a Cadillac system then Festool is what you want. As a person that can live with a Ford quality of tool I will buy more tools with the money I could have spent on Festool.

One thing that I do not like about Festool is the iron fist they have over their market. You will not find a Festool tool for more than a few dollars variation in price from one retailer to the next.

Some people want only the best and some may consider Festool the best. Festool is only the best if you buy into the whole system. If you only get a few of the tools the price vs performance ratio does not work for me. Plus with the system you must work Festool’s way and that does not appeal to me.

So you are not missing anything.

I like your compact shop. Although crowded everything seems accessible. I learned a long time ago that if you can go out in floor space you must go up and take advantage of wall space.

I like your compact shop. Although crowded everything seems accessible. I learned a long time ago that if you can go out in floor space you must go up and take advantage of wall space.

Sounds like Festool is your Apple vs others Android/Windows PC. There’s a premium for brand [loyalty] but the ecosystem is very seamless if you stay within it.

I suppose in regards to the ecosystem this is true, however I think tools like the Domino and Rotex Sanders are a class above the competition

Thye are excellent for mobile workers. In the shop they just take up too much space. I fit 4 sanders and their paper in one drawer versus 4 systainers.

This leads to the problem of what to do with the systainers, in my case there’s a mass of them jammed in some kneewall storage in the house. The tools retain dang near 100% value if you ever need to sell them but fuggedaboutit if you dont have the original case.

“I felt sorry for myself because I had no shoes, until I met a man who had no feet.”

The best days “in the shop” are those when the weather is good and I can roll out onto the deck to work, at which point the shop expands to around 500SF. 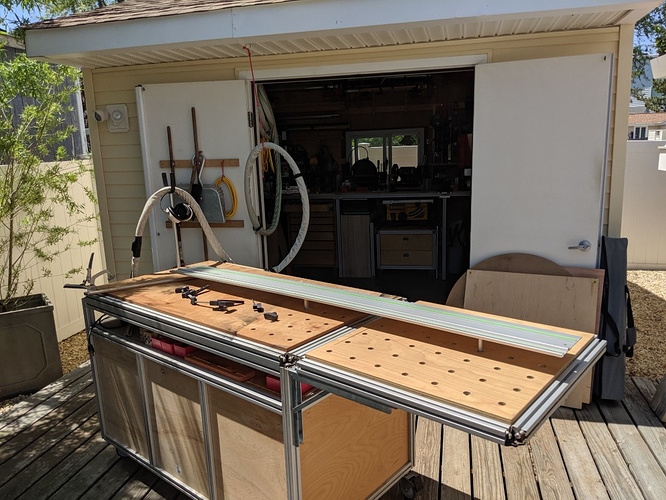 3 cardinal rules have developed for the shop:

The past 2 weeks have mostly been spent on enforcing the rules again, things often get away from me. I also had to cull out the off-cut collection.

Now we are far afield for the Festool extractor topic. Sorry @Luke

Now we are far afield for the Festool extractor topic. Sorry @MrBeaver

I don’t feel too bad, I have had my own threads hijacked often enough

This advice is very timely, I was discussing (read negociating) with my wife yesterday evening about how much more footage of the garage I could allocate to my hobby. The “everything on the floor is on wheels” is something that makes a lot of sense and I could work on.
Sorry, back to the Festool discussion !

I have a big pile of Festool stuff but the two items I consider really worthwhile are the Domino and the Kapex (miter saw). The Domino is a sort of “force multiplier” for my current level of skill in that you can plan parts as though you were going to dowel/pocket-hole them and then get the benefit of tenon joinery.

For the Kapex, I actually went through several other miter saws first and found myself actively avoiding them due to the giant cloud of crap they threw into the air. So I got the Kapex with its excellent dust collection, despite it being the price of two other-branded saws, and have been very happy with it.

Which is where things took off for me, as I realized I didn’t get any joy from doing in-house tool testing. If you are fortunate enough to be in a “money to burn and don’t mind smelling the smoke” situation, getting a Festool tool is shorthand for “give me a thing that will definitely work the way I want it to so I can stop thinking about it.” Is Festool always “the best” (whatever that means)? I don’t know, really - in the case of the Domino it is pretty much “the only,” so there you go.

In other cases, I couldn’t say, but I can say that it is unlikely to be as much “better” as the price difference would suggest. If, say, the track saw is 10% better (whatever that means in this case) than a competing brand - and again, I don’t know that it is - but is 50% more expensive, well…

It only really makes sense to me if money isn’t a major concern, is what I’m saying.