I had a need to stop my machine due to a workpiece moving, it appears that hitting “Stop” does nothing if one has not hit “pause” first? Is this intentional? It seems counter intuitive to me to have both buttons not cause the machine to stop. By the time I realized this issue the machine had already crashed and cut into my fixture, more or less destroying it.

In an “OH S***” moment the last thing I want to be thinking about is the difference between pause and stop. Looks like I’ll need to wire in a manual E-Stop to avoid this issue in the future.

You have to Pause first before stopping.

If there’s something serious wrong, please hit the emergency stop/switch off the power to the machine, trim router, and vacuum.

You have to Pause first before stopping.

If there’s something serious wrong, please hit the emergency stop/switch off the power to the machine, trim router, and vacuum.

I now know that, but my question is why? If the closest thing to me is the computer controlling the machine then why make it more complex to stop the machine moving than it needs to be? I have not wired in a manual E-Stop yet, I see I will need to now.

Because we don’t want folks to depend on a screen or cursor or pointer for an emergency situation.

The UI design here is terrible. There is no way to tell the button is disabled. It’s even in a semi-emergency colour, inviting it to be hit in case of trouble.

I know stop doesn’t work but I also always hit it first when I want to stop.

Suggesting this is okay because you shouldn’t be using it is… well… you can make your mind up about what your wrote there, but it seems very dismissive.

The stop button should be clearly disabled, should stop, or not be there until it works.

@WillAdams If you want us to use an E-Stop rather than rely on the controller software perhaps that should be included with the machine, I’m comfortable wiring one in myself, but I am sure there are plenty of people who would not be comfortable doing so…

@downrazor11 I think that there is clearly room for improvement here from a UI standpoint, this is a solid option in addition to what @Gerry suggested.

Pause causes the router to power off, if you have BitRunner, raise the router up and wait. If you then hit Stop the Shapeoko will home and wait and the job is aborted. So pause does not abort the job.

To me the sequence seems logical. If you simply want to check on progress you hit pause. If you have an emergency you power off. The reaction time for pause and stop is too slow for an emergency.

I recently showed my Emergency Stop Switch with a magnetic on and off switch. I have been liking the setup. The emergency switch is for immediate stops. The on/off magnetic button are good if the lights were to go off because the machine will not automatically come back on if the lights were to come back on unexpectedly. If you lights go off and you are in the dark first thing you do is to find a flashlight and try to determine the cause of the outage. Is the outage just one outlet, just your shop or your whole neighborhood. When you go to investigate most people will not hit the power on the Shapeoko and while off investigating the outage the power suddenly comes back on your Shapeoko will come back to life and the router will most likely turn on. Although it may not be moving it can could be causing a dangerous situation because while you are busy else where the machine is sitting there spinning. 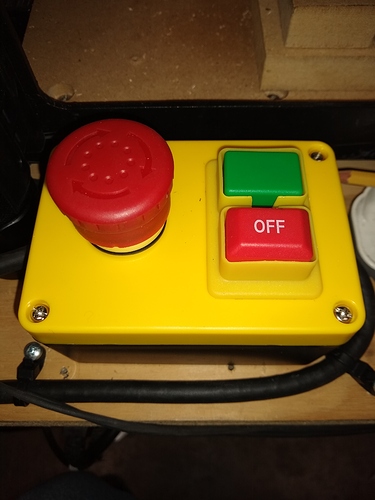 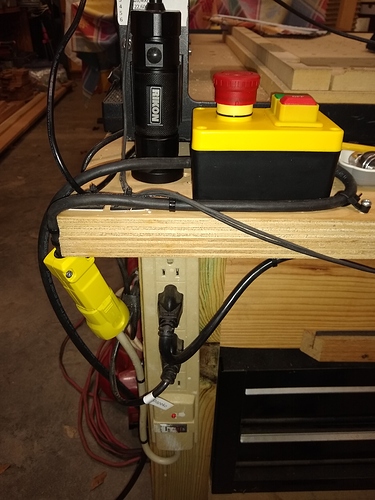 But there is little reason to not provide an INCLUDED Feed Hold. It’s literally a couple of dollars in parts and eliminates this confusion…plus, it works even when the software pause doesn’t (like during a bitsetter sequence).

Hey Guy…what switch is that? I had one that looked like that, but it was only rated to 1/3 HP and it would not work with my router. I ended up using the paddle type (red, below) and a momentary (green below) for my pause switch: 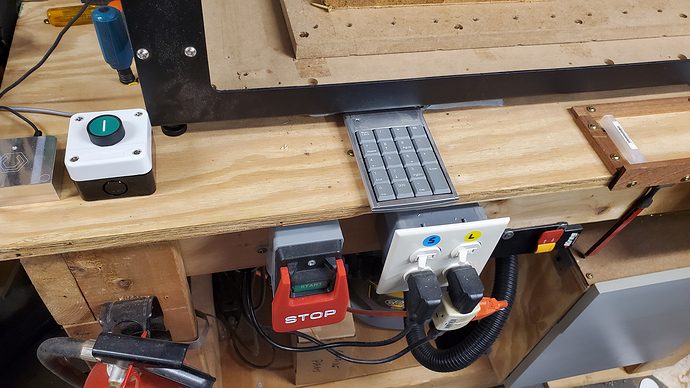 @GJM Valid point on people wiring things differently, I agree with you though regarding the feed hold button.

@gdon_2003 Wiring in a proper E-Stop that kills the power to both the router and motion system just jumped to the top of my “To-Do” list. I’ll definitely check out your thread on how you chose to do so.

It’s nice to see I’m not the only one left scratching their head with the lack of included hardware to pause/stop the machines motion. Especially given the ambiguity of the UI in the control software. I would argue it’s a safety issue not to have any included means of halting the motion of the machine without “yanking” the power cord or trying to hit the power supply’s toggle switch. The overall dismissive answer to my original post is somewhat alarming to say the least.

I agree that the ideal workflow is logical, the problem is the ‘Stop’ button is 1) red-ish and 2) shares nomenclature with things people would look to press in an emergency.

If the function of the ‘Stop’ software button is not to ‘stop the machine’ but instead to ‘exit the currently running job’, then the button should display something other than ‘Stop’.

EDIT: I also wanted to add that your emergency-stop button/enclosure is outstanding!!! When I get around to making that (and ‘FeedHold’ button) I can only hope mine looks half as good as yours…

I added the link to Amazon in the post above.

A link to the e-stop I built for my Shapeoko XL. This also requires a reset after a power loss.

Actually…I think that was the device I purchased…it did not work for my setup…not sure why. The 1/2 horsepower seems to be right on the edge for the equipment.

The product description is confusing. On one line it states 1/2 horse power and also states 16 AMPs.

So according to google (its on the internet so it cannot be wrong) they say 1/2 horse is equal to 367 Watts.

I have been using this for about a month without any problems. Since the rating for 16 AMPS is less than the estimated 11 AMPS of the Shapeoko and Dewalt Router I feel it is safe. I have several safeguards in place, the breaker on the circuit, the device itself, the power strip breaker that is attached to the switch and the size of wires I used to wire up, 14 gauge, so I feel confident that my setup is safe.

WillAdams said “Because we don’t want folks to depend on a screen or cursor or pointer for an emergency situation.”

As someone who has frantically clicked the onscreen “Stop” button to no avail while shredding a workpiece, I’ll say it was an interesting design choice to put a fake decoy ‘stop’ button on the screen while also not providing an authentic hardware safety stop button. I guess the idea is to teach Newbies in a dramatic and painful way to not rely on software in an emergency. I actually didn’t learn that lesson. The lesson I learned was to quickly hit the ‘pause’ button first. The need for a hardware safety stop button never even occurred to me.

Obviously this was a traumatic event for John. But changing the way the software/hardware works for the reason that you did not know how it worked is not always practical.

If the Stop button were available without first pausing think of how many times people might hit Stop and the machine would then initialize possibly ruining their project. Unfortunately there are no guarantees in life. Many people make them but most are not going to help you when you are being bitten on the butt by an alligator when you are trying to drain a swamp.

The vast majority of Shapeoko users may never need an emergency stop button. Once you have needed one you see the importance of it. I saw the possible need and added one to my system. Before your situation obviously you did not see the need for one. Not every situation can be accommodated when building machines and software with the confines of a budget. They could fit the Shapeoko with air bags in case you stumble and hit your head on the corner but it is not practical or economical. I am not making light of your situation but planning your shop is up to the individual. I have 4 fire extinguishers in my shop and Carbide3d did not supply any of them with my Shapeoko but I realized the danger of fire in my shop and added the equipment I thought met the needs of the danger.

They call them accidents for a reason. The event is unintended but usually avoidable with proper fore thought and planning. Unfortunately not every accident is avoided but training and planning can mitigate an accident and lessen the damage but not always avoid the accident.

There is inherent danger running woodworking equipment and you must accept the risk to reap the reward.

@gdon_2003 It could be as simple as changing the separate Start and Pause buttons to more of a Pause/Play setup since you only have one state active at a time anyway. Then rename Stop to something more descriptive about ending/exiting the current job.

In the interest of KISS - I use a Kreg router switch, which may as well come with the machine! It doesn’t have the benefit of staying off after a mains power cycle, but with a BitRunner that hasn’t been a concern of mine. If you’re on the fence about implementing an estop for some reason, this is a great solution that is designed for routers.

If you are driving everything from a single 110 volt circuit, my favorite solution is to use a Kreg router switch. It’s nice because you don’t have to do any actual wiring, and it has two outlets already built into the back. I use one for the router and one for the Shapeoko electronics but YMMV, have not seen any issues. https://www.amazon.com/dp/B002AKJ2FC/ref=cm_sw_r_cp_apa_fabc_s523FbKVCJ8WH

Raising feed hold to a properly documented feature seems like a great idea, though some easily accessible guides to proper workflow should be made. Read: I shouldn’t have to come to the forum to find them, make this stuff a single flow diagram linked from the software.