Prop-Nut project for keepin' it cool

Hi fellow Carbide folks, I figured I ought to contribute some recent projects to the gallery since I’ve been on hiatus for a while, so here’s the first one!

I was inspired by a prop-nut someone had designed and 3d printed that I saw at MakerFaire, I’m forgetting which of you that was back then, but if you remind me, I’ll give credit where due.

At any rate, I’ve made a prop-nut for the Nomad (or any other ER11 collet for that matter) that creates a down-draft while the spindle is on to blow chips away from the cutting area and also cool the cutter and the part: 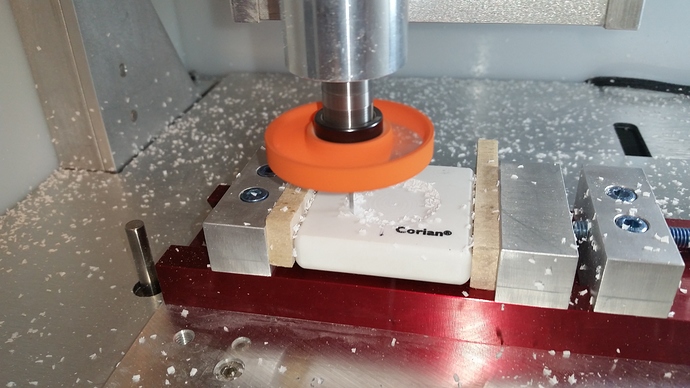 This is a 3d-printed version that I got from Shapeways, which actually you can pick up your own of [here][1] if you want to support me making a tutorial for how to machine your own 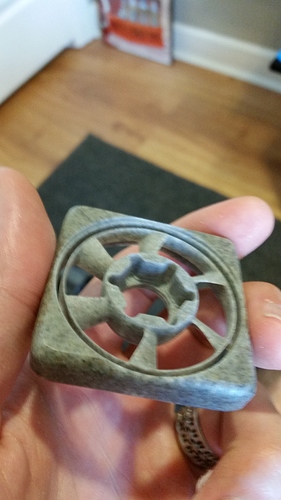 Here is a WIP out of a Corian sample, cut only using the standard Carbide 1/8" flat and .063" ball and flat tools. 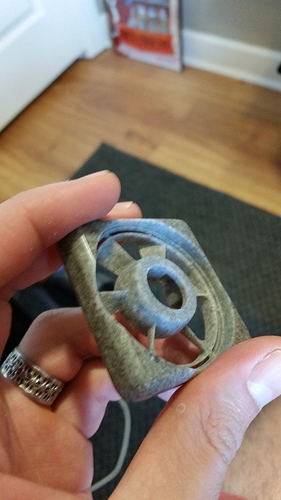 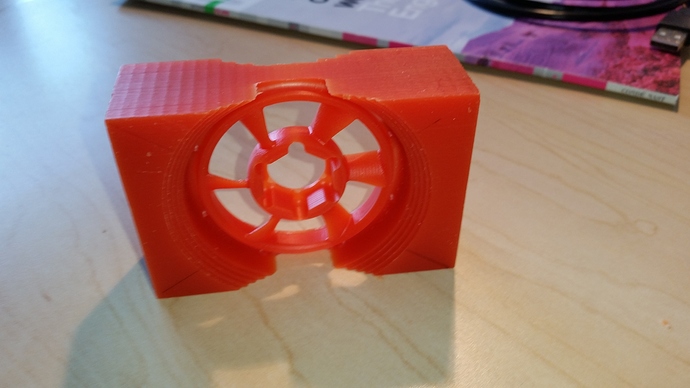 This is a variation I cut in wax, which wasn’t strong enough for any real rigorous use-testing, but it worked also! 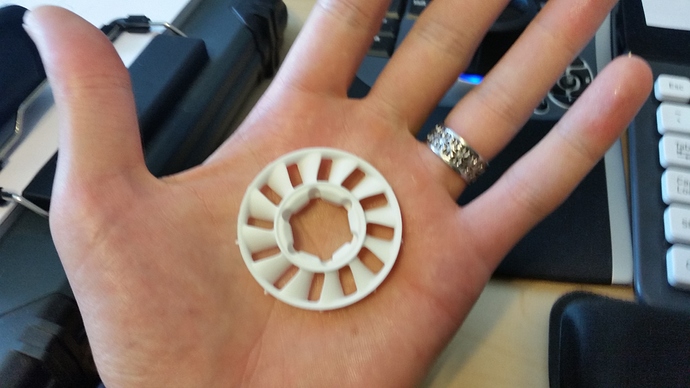 This is the “Mark II” version that I cut out of a Corian sample also—it’s ‘all a bit meta’, because the 3d-printed version 1 shown above was clearing chips for cutting this version.

At some point as I get back into my groove here on the forum I’ll try to post a tutorial/walk-through on it and the settings used for Corian. Hope you all like it

is corian a good material for this?

Did you post this STL file on thingiverse by chance?

I think Delrin or the less expensive HDPE would be interesting to test.

@dr_g Corian machines nicely, and it’s pretty easy to come by the little 2"x2" samples at your local Home Depot or Lowes (for free), which was why I chose it for my own tinkering. I agree with Apollo that HDPE or Delrin would be great choices for it.

@ApolloCrowe I didn’t post the STL on Thingiverse, considering I’m offering it on Shapeways

Also I had done some iteration on it, so I’ll probably release this version as part of tutorial on tool-paths & setup for it, once I post a “new and improved” one to Shapeways.

Looking forward to the STL!

You’re welcome to try this stl. It was 3d printed in ABS from an Afinia printer. It press fits onto the threaded collet holder so it’s not as elegant as the one in this post. It definitely creates a breeze though I’m not sure how effective it is because I’ve been mostly working in aluminum lately with a periodic misting. It’s derived from a thingiverse file so someday I might upload it.

If it doesn’t fit snug due to your 3d printout, I would recommend scaling it up or down a few percentage points in your software. That should help with any discrepancies.

Looks good, anything to improve the machine I’m in for.

i bought one on shapeways and it works well. agree that one could scale it down a % or 2 and have a better fit.

I got one of UnionNine’s props from Shapeways, and today’s my first time trying in (on Candlestone, for my first try at making lithophanes). And I have to say, the difference in chip buildup is marked. 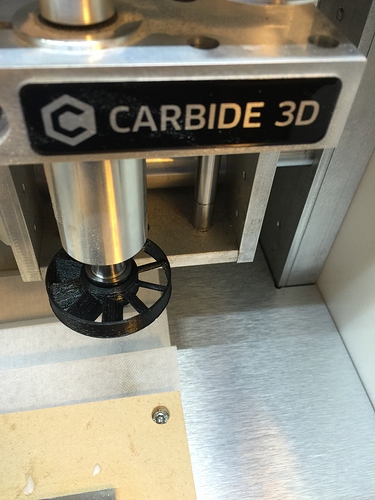 How do you like the contrast using Candlestone for your lithophanes?

Too early to say – still cutting. The roughing phase took nearly 2hrs, and only got me to 2.1% on the CM meter(!). I suspect the finishing run with the 0.063" ball mill is going to take a loooong time.
And I’ve never used Corian before, so I don’t have a basis for comparison – the customer testimonials about Candlestone here on the forum (

) convinced me to go straight to the better stuff.

Candlestone is really nice material to work with.

I was thinking the same thing… I think 3D printing this part would be much easier than milling it.

@tshulthise Absolutely it’s easier to 3d print it, which is why I originally made it for printing on Shapeways. But I also designed it so that it can be milled also, because it’s a great opportunity to work for a really nice surface finish where it matters, on the turbine blades, and it’s a good machining challenge.

I’ve made the adjustments to produce the mk2 version via shapeways and have ordered it, so I will soon have completed my own testing and will have re-launched it back into the wild

Then it’ll be tutorial time for how I set it up.

Nice. Just curious, how much does Shapeways charge to print this part? If you are interested in getting 3D printed parts for less money check out my 3D-hub here… https://www.3dhubs.com/louisville/hubs/3d-innovation.

Thanks for sharing your project and being willing to write a tutorial. I can’t wait to get my Nomad so I can start diving into all of this.

I just totally noob’ed this up

I’m not great at modelling curved blades yet, they are flat.

The outer diameter is 45mm