Ordered a dustboot last week from the company website last week and it’s been crickets so far. It said “in stock” so I was expecting it to ship out in a day or two. Has anyone bought anything from this company lately? Wondering if I shouldn’t jsut cancel the order and go with the Suckit. I really liked the design of the one I bought though. maybe it’s a one-man operation only doing it part time at night or something, which is fine, but a little communication goes a long way.

Got a link for this? I’m just curious.

That’s the one. Looks like a nice design, but still a bit worried. Their facebook page hasn’t been updated since April.

I have one I bought direct from EV-Guide. I use a Suckit now, but this one worked pretty well too. As I recall it was a one-man show.

Yup, I have one also. Pretty cool design, especially the spindle lock. I have also switched to a Suckit because I wanted the boot to be independent of my Z due to some fouling issues I was having at the time while cutting deep pockets, but it’s still a decent boot. The maker at the time I bought mine was a one man show, but very responsive to emails. I also have an LED light strip from him, good stuff.

I have one also, they do not build in advance so it takes longer for you to get it. I love mine! It took about a month to get it.

I don’t care for the design. It connects directly to the router and goes up and down with the router. I have the Suck-It. And am very happy with it.

Bought one directly from EV-guide as well. I would recommend emailing him ASAP. I waited a week to email and when he finally got back to me he explained he had some issues with his order system. Anyway, once I was in communication with him it took about a week to receive. I like the design, but as others have stated I do notice issues with losing steps on plunge moves because of the boot being attached to the router, which may not be an issue if your using a more skookum Z like Mr. Beaver’s.

Thanks to everyone for all the replies. I had emailed and I finally heard back from him last night. The item isn’t really in stock and he is out of the country, so I’m backordered for a bit.

I almost went with the Suck-it, but chose this one because of the open front design so I can see what the bit is doing. Being new to the game, there have been a few times when something went wrong that I was able to see and stop immediately and saved my piece from being ruined. I don’t think you can see what the bit is doing with the Suck-it, correct?

For those that switched from the 3d to the Suck-it - how deep do you have to be cutting before the 3d dustboot impacts your work? I have time to switch my order if that is going to be a problem for me as well.

Thanks again for all the insight, I really appreciate it.

Except for the bristles at the bottom, most of the Suckit is clear acrylic. I have not had a problem in seeing the work being done.

i agree with Gregrgs. I can see fine with the Suckit. Any fixed-eight shoe will have the ability to interfere, especially using the stock Z. Those stiff bristles caused me to lose Z steps more than once. i finally purchased a thinner brush for my EV-Guide. That helped.

I see the work just fine with the Suck-It boot. And the quick change setup is great if you have bit changes.

I still use the 3d boot, I just significantly lower my plunge rate if I know that my work piece will be within say 1" of the router. Or, since the only real problem is the bristles causing resistance between the Z belt and the work piece, you can pause and remove the bristles, then pause and reinstall when your heavy plunging is done. Really depends on how you want to handle it.

I don’t think the Suckit is acrylic anymore. In looking at the site it is one piece now and they have white, blue or black (it says it is a new design). They have some pics on their website of what looks like a previous model where the bottom was acrylic and just the hose connector was colored.

It’s a tough decision for me whether to stay the course or go with the S.I.

Or, you can grow your own if you have a 3D printer. There is a F360 file here in the forums somewhere. I modified it to fit my Makita. Happy to share that file if anyone wants it. Be advised, it’s not as convenient as the 611 design, you have to remove the boot to change bits.

I’m not very smart, I broke 2 suckits on clamps/fixtures. This design is more robust, shall we say. 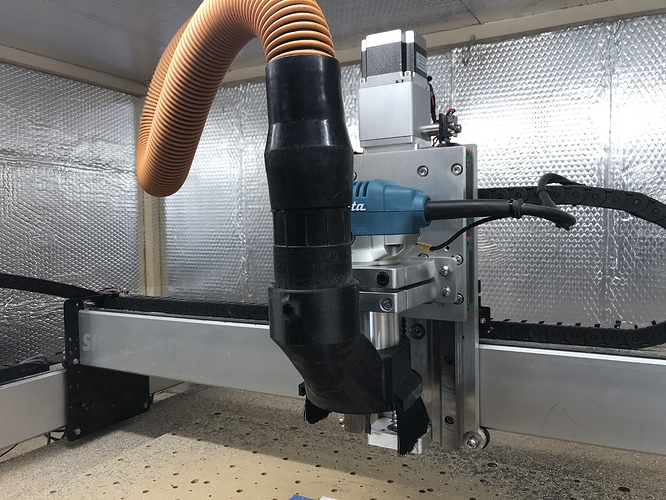 I might just have to take a serious look at the best $1,000 price range 3d printers now that I see what you have just made successfully! Nice work Griff!

Got a Prusa Mk3 kit a few months ago, so still a babe in the 3D print world. $799. The dustboot in the pic is polycarbonate, so pretty tough. I’ve read PC is difficult to print but there is a thread on the Prusa forums that makes it easy.

Did mine with PLA and around 15% infill going strong.