I set up a 3D Adaptive toolpath in Fusion 360, using the settings from this video (I’d love to post the settings themselves but apparently new users can only post a single image).

This was the result: 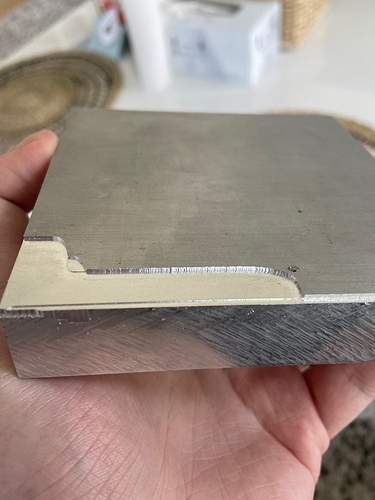 My concern is that edge with all the vertical ridges.

While the machine was running, it got really loud when it was cutting that edge and sounded like it was rumbling/vibrating more than I think it should. However as I said, I’m very new to this and so have little clue what’s normal and what’s not. Maybe this is normal for a roughing pass and I’m meant to clean it up with the finish pass?

My best guesses so far are:

I’d appreciate any advice anyone can give. My next course of action is probably to try a bunch of pockets with different feed rates.

Welcome to machining Aluminum on desktop CNC’s . Its going to scream for sure when cutting aluminum. There are so many different variables to dial in to get to the place where the screaming sounds normal. If you’re playing the noise game, you sort of want to learn the noises the machine makes while its cutting in every axis and also the pucker noise made when the Z starts to plunge from the top. I know none of this is helpful, but just keep cutting aluminum, break some endmills, do a little chip welding and stall the motor a few times and you’ll be well on your way to getting over the fear factor. I’ve learned to embrace the fear, but hold on to a healthy dose of respect for a carbide endmill flying around at 10k - 20k rpm more than likely with to much runout ready to kill me at any moment.

I think in the video Winston is using baseline 6061. 6082 seems slightly harder? Maybe back off by 10%
Was this a roughing pass or a finish pass? How much stock to leave did you have on your roughing pass?

This is roughing, I haven’t done a finishing pass yet (I shut this down mid-job to avoid breaking anything).

Update: It appears that somehow, my Z-axis is getting a random offset every time I start a job, which may have led to a deeper than specified cut. I’ve checked the setup G-Code which looks sane:

Basically the steps I take are:

So far on the last step I’ve seen differences of around -1mm and around +1.7mm so I think this rough cut probably came from my Z-axis plunging further than I told it to.

I’ve emailed support but if anyone has any ideas about this, I’m all ears.

You said workholding is bad. Try the painters tape (blue tape) on both the material and your wasteboard with some superglue inbetween the two painters tape layers. Should be pretty solid after about 30 minutes.
Is the material you have fairly flat? Might need to do a sufracing operation and cut a bit of air over some areas to flatten the material.
What are your heights set to? I usually set 3 mm for retract, and 2 for clearance height.

Unfortunately I don’t have easy access to painters tape and superglue right now as I didn’t buy any before the lockdown.

The material is quite flat. Not perfect but not enough to cause this either.

The heights are all set to Fusion’s defaults, which IIRC are ~10mm for retract and ~5mm for clearance.

Adaptive clearing is never a finishing path and will almost always leave vertical lines on the walls. Its good practice to use a small amount of stock to leave radial and axial, 0.01 for the nomad) then clean up vertical walls with a contour pass. I like to use a horizontal path to clean up floors, add 0.005 radial stock so you don’t mess with your wall finish.

If scaling back on feeds and speeds just make sure you don’t go under 0.001 for chipload including thinning (0.0005 for teeny endmills)

What endmill were you running?

Adaptive clearing is never a finishing path and will almost always leave vertical lines on the walls. Its good practice to use a small amount of stock to leave radial and axial, 0.01 for the nomad) then clean up vertical walls with a contour pass. I like to use a horizontal path to clean up floors, add 0.005 radial stock so you don’t mess with your wall finish.

I understand that the surface finish with a rough adaptive pass won’t be perfect, I just suspected that this degree of noise and vertical edges might be too much. Sounds like I might have been worrying too much though.

What endmill were you running?

You can tighten up the adaptive pass by adjusting the tolerances and smoothing. As long as everything looks consistent then I think you are probably using good feeds and speeds.

What was your stick out on the tool? 0.125 shanks are decently sensitive to that and deflection can cause bouncing. Two flute should run well.

The Nomad is very stiff and a decent cut in aluminum does make some noise lol.

The nomad is loud when cutting aluminum. I recommend not only learning the sounds but getting hearing protection. I wear noise cancelling headphones while I’m running the machine just because. I pay close attention to my first few pass and that. I will go back to the PC as it runs and basically only listen for changes in the sound. I recently made some mods to the spindle and I can run it now and not have to run hearing protection because it is not as bad as the stock spindle.

I was prepared for the machine to be loud after my first couple of attempts with it. I built a box-in-box enclosure out of 10mm MDF, some foam liner and some foam pads. Even when it sounds like a demon is being exorcised inside, the noise levels in the room are similar in volume to my computer.

What were the mods you made to the spindle if you don’t mind my asking?

Oh and to be clear, my concern isn’t the volume of the noise but the quality of the noise. When I take really shallow cuts they sound is like a mix of a bee and a ringing glass (but louder of couse). The sound that worried me was more like a chainsaw going through a boulder.

Okay, the machine is largely running as I think it should now, it sounds okay even up to 880mm/min feed rate and the surface finish on the walls looks rough but it’s meant to on a roughing pass: 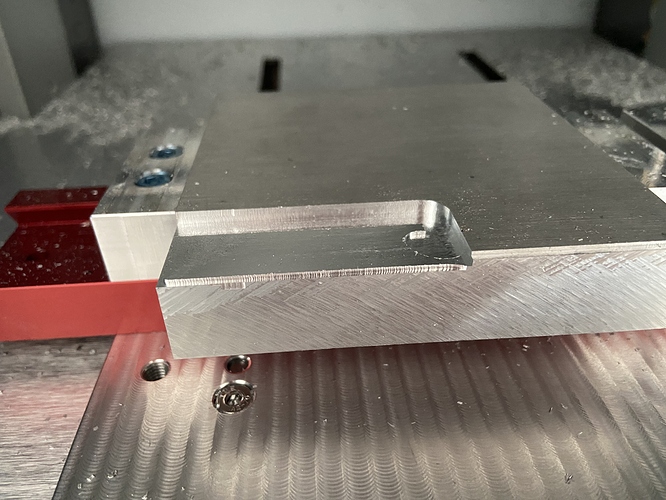 In the end I think the issue was the Z-homing issue. I’m not sure what happened there but when I turned on my machine again, it behaved itself for some reason.

check you z-limit switch, besure nothing is stopping it from gettting to the top. dont know if you added anything for blow off of chips. check collet to be sure it tighten properly. and also ensure your carriage and spindle are rigid.

i have another thread about my upgrade “mcgill pinout”

you finish looks about right for roughing. will be even better once you give it a finihsing pass. 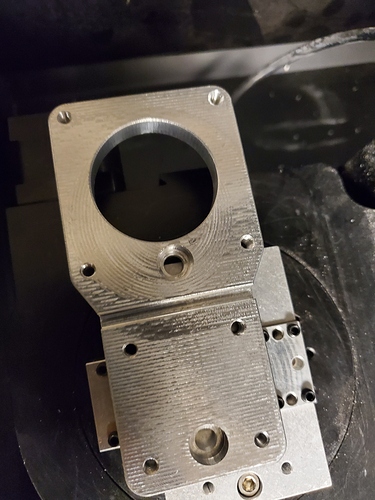 Due to the low spindle power of the stock Nomad you can’t really do any damage beside sacrificing an endmill or stalling the spindle motor when pushed too hard.

Maybe you could post one of your videos of Nomad cutting aluminium so that @Moded1952 can hear what “good” sounds like ?

I remembered this fantastic thread that had many videos, but they’re all inaccessible now ?

I’ve had a similar Z-homing problem before with hard substances such as aluminium.

For me it was because, when zeroing, I used the ‘Fast’ speed to lower the Z axis and it collided with the stock’s top. I said “oops” (but more strongly) and then proceeded to use 1mm and 0.1mm increments to zero the machine using the tried and true paper method.

However, when running the job it immediately cut too deep.

Re-homing the machine fixes this, naturally.

@DEDynamics I’ve checked those things thoroughly, especially the collet. I was super afraid that an endmill would fly out and put a hole in my skull or something. I’ll have a look at the upgrade.

@Vince.Fab Thanks, that’s actually really comforting. If that’s all that can go wrong I don’t have to worry too much. I bought a ton of endmills because I expected to break them.

@Julien I’m able to play those videos, I just have to do it with VLC or something rather than the browser. These are really helpful, thanks!

@Gerry thinking back, I think that actually was the problem. I did exactly that at least a couple of times. I think maybe it’s not enough to re-zero though (as I did that after the stall), I think perhaps you need to re-initialize the machine entirely?

Yea so if you have a crash it’s best to re zero the machine. The steppers will have lost count and will be off Everytime.