I have been using carbide create for all my projects and I have to say the programmers have done a great job. I like how simple and straight forward it is. I do find myself counting squares an awful lot though to find my spot on the work area. It seems like a simple ruler that matched the work grid would be a very nice feature. Until then I guess I will continue to make rectangles to measure distance on the grid so I don’t go cross eyed counting grid squares

Rulers would be great. Agree, counting squares or making rectangles to measure is no fun. I know it’s apples to oranges or grapes comparing these two, but I’m really fond of the sketchers screen in Catia V5(it’s what I use at work, so I’m obviously biased).

YES! Rulers in the project space!

I’ve always found it more convenient to have these as a separate utility which one could scale at need to match the screen display (unfortunately Carbide Create doesn’t display the scaling percentage) — kind of a shame one can’t bring up the ruler from screen sketch in Windows 10 in other apps.

Yes Ruler please. also a way to set up default page so we don’t have to edit it each new project

Love carbide create for its simplicity. In fact I don’t know that I would’ve made the plunge into home CNC it were not for carbide create. Now that I’ve become more proficient with the software there are a number Updates I’d like to see. A Ruler is first, followed by an option to create concave concave shape and cuts

I’m wondering if this is the best place for feature requests, or just emailing support@carbide3d.com

In any event, I concur with all the sentiments here. CC is a great tool, but it desperately needs a measurement tool, or ruler markings on the grid or something.
Sure for squares and circles the dimensions are simple to see and control, but any time I’m doing a polyline shape, I quickly go cross-eyed counting the squares.

Personally, I think that making feature requests in a forum provides instant feedback and users know what features have already been requested. On the other hand, I wonder if there is any appetite from Carbide 3D to provide anything but basic functionality in Carbon Create and Carbide Motion. There are tons of features that would be good to have in both software but I think their resources are limited for a free offering and there are commercial offering. Personally, I wish they were in an open platform and the community could enhance the basic software with upgrades and apps (similar to Easel). This would certainly make the software more useful and significantly increase its capabilities.

Thanks Will. That’s a useful workaround.
Based on that, I figure I can also use skinny rectangles to find/set a side length. It’s a bit kludgy, but much better than having to count a ton of blocks.

Still with there was some measurement/ruler tools integrated into CC.

Here’s a 2" ruler drawn up in Carbide Create — open it, then duplicate (and edit the number) and regroup to extend at need: 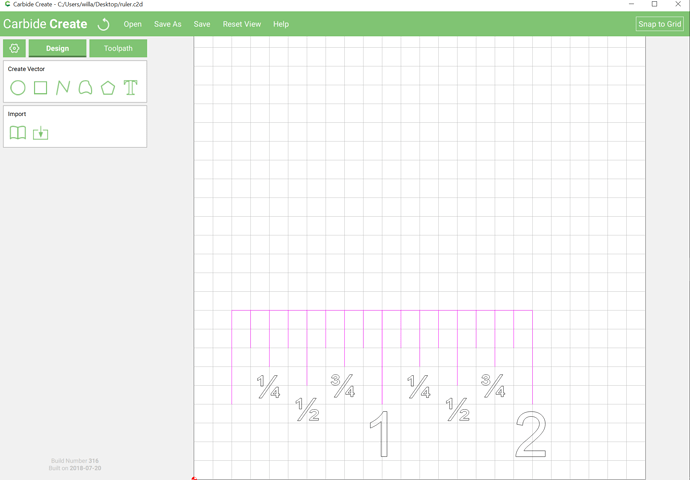 Though now it has me wishing the granularity of the grid sizing could go down to 10 thou so I could use 16th’s. …never satisfied, lol

This definitely helps though.

That’s a cool idea. It would be nice if there was a way to import / .c2d into an existing project. I run into this a lot. Where I want to mix and match previous drawings. Kinda like getting half way through a drawing and realizing you want to import that ruler you just did.

I just used it to create a ‘template’ .c2d file.
You could always create a few different stock-size templates if you needed to. You just have to remember to start with it.

We’ll have to draw one up in Inkscape or some other program as an SVG which can then be imported.

I just looked at Will’s ruler.c2d as an example, and it appears that C2D files are just JSON-looking data with a handful of lists of items (“CIRCLE_OBJECTS”, “CURVE_OBJECTS”, “RECT_OBJECTS”, “TEXT_OBJECTS”, etc.) plus a “DOCUMENT_VALUES” section. The IDs in the data look like UUIDs.

All that being the case, it looks like it could likely be all but trivial to merge the objects from one C2D file into another. I’ll see if I can whip up something so we can try it out and see if it is indeed just that easy, as it sounds like something that would be quite nice to have.

Well, thanks a lot.

I couldn’t fall asleep with such an interesting and likely simple question on my mind, so I figured why not get up and give it a whirl. Long story short, it was that simple, but a merged file is inconvenient if everything in the source files wasn’t grouped. Selecting in Carbide Create has always been rather terrible, after all. So, the obvious answer would be to group everything in each file before merging.

Turns out, that’s also trivial, as you just have to append a new UUID to the “group_id” list for each object. (Grouping grouped items into supergroups and so on just adds the new group ID to the end of each individual item, which makes life easy.) So, a few lines of basically trivial python later, and I’ve got a completely functional C2D merging utility. It takes everything – the circle, curve, rect, regular polygon, text, and toolpath objects – from one file, and dumps them into the second (with everything coming from each file grouped together). The document properties of the second are untouched.

I’ll throw a bit of polish on the python so it’s all right and proper and takes command line parameters, and I’ll see if I can whip something up for the Windows users who aren’t comfy with python and the glories of command lines, but yeah, merging C2D files appears to indeed be utterly trivial.

And with that, I can now return to my regularly scheduled sleep state.

It’s hearing things like this that makes me wish they would create a set of API’s that would allow the community to integrate third party plugins or add-on’s for CC.

I’ve always been amazed at some of the “modding” that come from a community of passionate users.

Yep that’s what I’ve been saying too. This way you can have a much better/full featured product to offer with minimal internal resources.