Hi all, I recently installed a new waste board and surfaced it level. All the belts are tight, I cleaned all the vwheels and belts as well. On one of the first cuts I noticed the depth of cut along the Y direction was deeper at the top and bottom than in the middle. It was set to cut .02" past the bottom of the material and into the waste board. The top and bottom of the cut is about .04" into the waste board while the middle does not appear to have even broken the surface. This was a straight cut, so it would just be riding the rigid rails straight up and down in the Y direction, does anyone know what could be causing the depth variance? 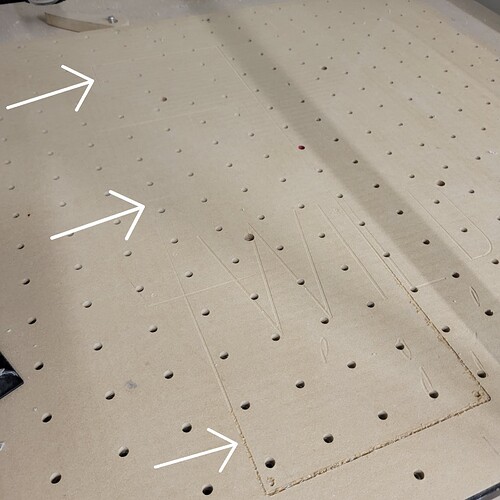 Maybe dust building up under the board?

I was cutting acrylic with an upcut bit, so there shouldn’t have been any cutoff material forced downwards under the material. The router itself is tightened securely and there does not appear to be any deflection in the router or bit.

My bad, I should call it a “Spoil Board”.
Sometimes dust or chips can work their way under the Spoil Board and cause what you have there.

Understood, I just vacuumed the underside of the new spoil board and surfaced it yesterday with the dust collector on. The board itself is screwed down in all 4 corners and 4 more spots in the center so there shouldn’t be anything under it at this point.

More likely is the tool or router getting pulled into the cut — were you cutting slots just as narrow as the endmill?

Avoid such cuts which have high and frequent tooling engagement — add geometry and cut as a pocket down to tab depth or the penultimate pass:

Yes the cut in the original photo above was an 1/8" profile cut with an 1/8" upcut endmill, but I am getting the same results while engraving with a 90 degree V bit at minimal depths. The acrylic I was engraving was .09", the cut depth of the V bit was not to exceed .04" but at the top and bottom the bit actually cut through the material (so about .05" deeper). The photo below gives a better visual of the inconsistency at the top and bottom 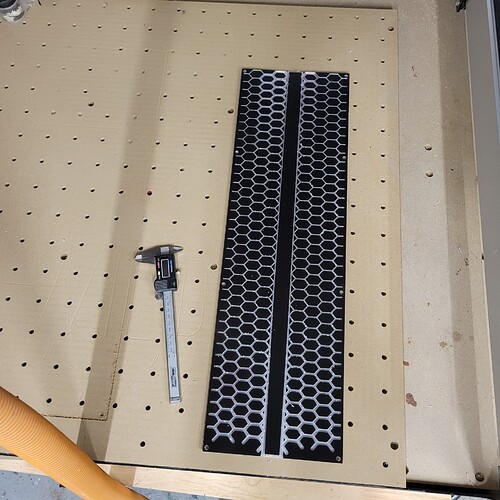 Have you surfaced/trammed your spoil board?

Yes I just surfaced yesterday. I have not trammed, I can give that a try but I would think a tram error would be one end or another right? Not both ends?

To me, it looks like your spoilboard/base has some flex in it. Try jogging an endmill to a few points in question, and down to almost touching the spoilboard, then see if you can push the spoilboard down with your fingers. If you can, this could account for your inconsistent depths.

Even though you just surfaced it, my mdf spoilboards tend to warp and introduce new curves and forces after surfacing.

I ended up removing the cross braces and bolting the frame right down to a table, as there was no hope for mine. They had a lovely bow in them that would flex under a a bit of force. I fought an issue similar to yours until I did this.
Good luck

I second the observation of @David.Curtis . I had a terrible piece of MDF from that large blue box store that was not uniform thickness, so I surfaced it before running what was going to be a very long V-carve (13 hours). I surfaced the night before so I could run the carve in one shot, the next morning the board was a potato chip. It seemed to happen faster after the protective shell was shaved off the top of the piece. This happened more than once on this piece, warping while being carved, abort, resurface, try again. I was impatient and was working with MDF fresh from the store. Was this a fresh piece of MDF did it have time to acclimate in your shop before cutting and surfacing?

Even though you just surfaced it, my mdf spoilboards tend to warp and introduce new curves and forces after surfacing.

I’ve also switched to an HDPE spoil board on an 80/20 extrusion bed because of concerns about warping of the machine due to seasonal humidity swings, basement shop in New England.

@LWSIV great point, I just placed a 4’ level across the waste board in a couple directions and it is definitely lower in the middle. I wouldn’t have even thought to check that after surfacing but it does make sense now since it was a fresh sheet of 3/4" mdf from the big box store. @David.Curtis I noticed the waste board does flex a bit when pushed down in the middle so it looks like I have a bit of work to do to get things level again. Thanks for the quick responses guys, I would have completely over looked this.

Unfortunately the baseboard on the XXL does not stay flat, it moves pretty constantly, even under load as you clamp workpieces.

I have bolted mine down to the torsion box it lives on using filler strips under the steel straps, bolts and large washers here in the center and under the T slots left and right 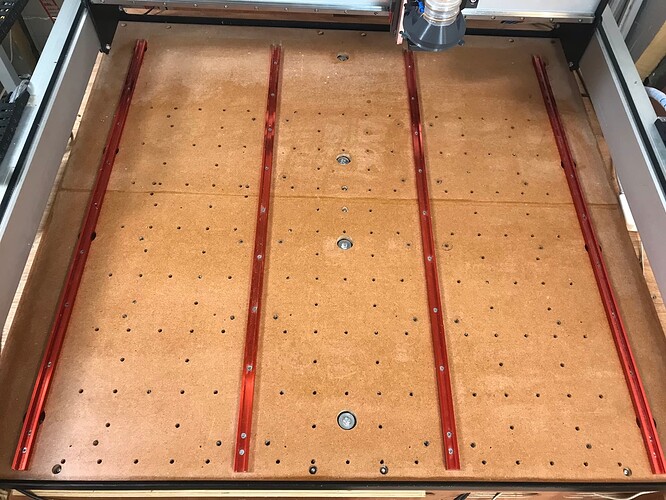 That keeps the whole machine rigid and square, cuts down on spoilboard vibration etc.

Other folks have been less extreme and got good results from laying the base of the machine on a rigid foam or other methods which stop sagging.

I went with bolting down because I wanted to deal with the upward part of the vibration motion and deflections when clamping workpieces as well as just the sagging.

Could be that the bed is sagging? Mine certainly fluctuates. Temperature. Loading and unloaded. Maybe run a dial indicator over the bed for a little visual.