Hey all. Been lurking since I placed my order and I wanted to report on the condition of my Shapeoko 5 Pro upon receipt. (There was a request in the main thread to do this, whether the results were good or bad.)
TLDR: mine was received in damaged condition, but it appears that C3D’s packaging likely prevented real harm.
I wasn’t there to receive the shipment, but took photos immediately upon arriving home, under 2h after delivery. Box 2 had clearly been dropped and ripped open, then been crudely retaped with the small box containing the screws taped to the outside. Box 1 had also been dropped, but the cardboard survived the handling. In the first photo, box 2 is on the right. 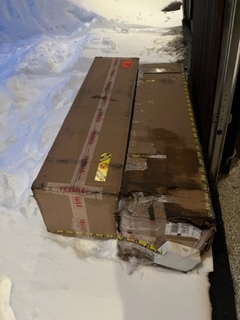 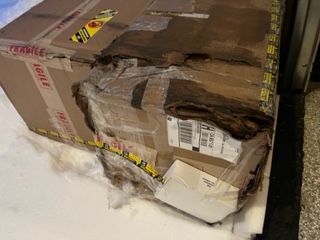 Once I moved the boxes to my garage and opened them, I was somewhat reassured. The rails were all protected by the foam packaging internally, and the HDZ box, which had clearly been compressed against the rails below it in a drop, seems to have protected the actual HDZ, again with the foam. Note the degree to which the cardboard has been crushed on the sides of the box in this photo. 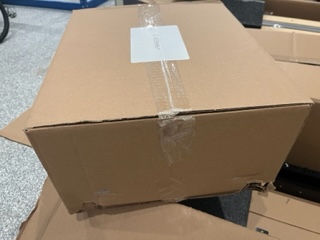 One mystery: I found two loose screws in box 1, as shown in this photo: 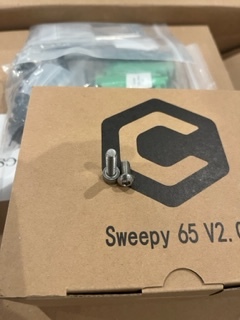 They may be from one of the hardware bags, but it’s definitely disconcerting. I’ll have more time later to assemble things which will allow me a closer look at potential damage.

Mine arrived with both boxes clearly busted open in transit (someone re-sealed both with clear shipping tape). The drop(s) in transit were minimal, with broken drag chain mounts and left Y Axis motor wires cut and pulled from the connector. C3D quickly got me replacements (next business day). C3D support has been exceptional and truly world class. Only recommendation is for C3D SO unit packers to use binding straps around the boxes, so when the shippers drop the boxes and the brown packing tape doesn’t hold, the binding straps hold the box closed (no contents spilling out). A single strip of brown packing tape doesn’t seem to hold those heavy rails when UPS is gravity testing the boxes.

As of today, the boxes are shipping out stretch-wrapped, and they should receive an outer carton in a couple of weeks.

Those loose screws might be from the gantry cross dowels, they probably vibrated loose during transit. A few of mine were loose in the box as well.

The foam inserts in the boxes really help to protect everything. Adding the stretch wrap should really help contain everything and keep the box together.

The real problem is the delivery service treating your expensive baby like a football. The drivers and warehouse people just see a box and their job is to move the box from point a to point b. They do not care if it is your grandma’s crystal or a lead weight. They just throw it and get away from them. Any collateral damage is just too bad for you. The only way, and not likely to work, is to make them pay for their mistakes. Too often people just say whatever and they get away with treating your precious items like a football they want to kick and throw around. Packaging makes a difference and everything I have ever gotten from C3D has been packaged very well. With any new model there are growing pains and it seems like C3D has a handle on these growing pains.

It may of course be the delivery person, but the delivery companies are known to put a lot of pressure on their personnel. Profit is the name of the game.

It’s unfortunate that C3D has to spend more money to mitigate most shipping companies refusal to invest in the infrastructure required for the size/weight of packages they accept.

Mine arrived partially opened. But the great job C3D did with the inner boxes and foam prevented any damage. Not a scratch.

All of my hardware luckily was still there despite the openings in some spots.

UPS and FedEx are monitoring their drivers via GPS for where they are and how long they spend on each delivery. So yes the driver is under pressure but every job that is worth a darn you are under pressure. The problem is the shipping companies just dont care about your packages and dont care if they get damaged by their package handling techniques. The larger the package the more likely they are to be damaged. Now at the tail end of the chain is the driver and they try to sneak off when they deliver a package that is clearly destroyed. That goes back to the company tracking them to see how long they spend anywhere they stop. So the whole thing is rotten from start to finish.

I had exact same issues. I lifted the box up to the work bench and a couple screws and the cross fowls fell out before I even tried to open a box. Definitely wasn’t a good feeling. Was able to assemble all the way but without the ability to do the gantry shift. 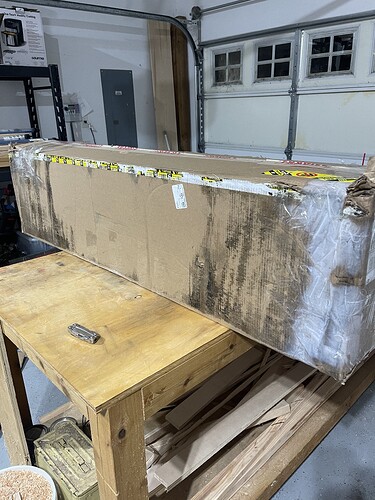 Also anyone having issues cutting with the new 5. My machine gets an inch into the cut and stops?

There is a wiring problem in the front plate. You can fix it as outlined in the main Shapeoko 5 thread or wait to receive new wiring.

Since this thread is redundant to the main SO 5 Pro thread, I’m going to lock this thread and encourage others to look for information here:

I fixed my bitsetter issue by swapping the black and green wires on the female side of the face plate extension cables 4 pin connector. Works great now! [image] [image]