I was creating a plywood-only table for my Shapeoko in Fusion 360 and playing with the parametric dimensions (I’ll be creating several tables and benches for a new space). It’s a work in progress, but I figured I would share it here in case anyone wanted to try it out, make a derivative, or throw some suggestions my way: https://a360.co/2E2R8Ef

I’m also investigating a a good way to automatically generate a BOM or cut list, if anyone has suggestions. 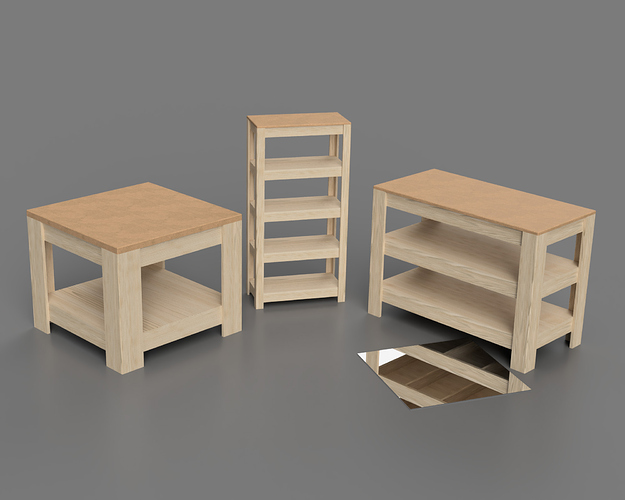 My suggestion is to build the top of your CNC table into a “torsion box”. Then add the elements that make it fit your overall design. Function before looks …

I’ve been working through that a bit using opensource software — you can see what I’ve worked up thus far at: https://wiki.shapeoko.com/index.php/Design_into_3D — BOM/cut list is something I want to investigate soon.

I actually started with a parametric torsion box tabletop, as a separate project, but haven’t integrated it. There were some things I wanted to change with the grid layout before I shared it, but since you mentioned the topic: https://a360.co/2RJKHhh

Thanks for sharing, those are really nice designs.

I made this torsion table cabinet by The Wood Whisper. It is a beast and the perfect size for my Shapeoko XXL.

Here are some of my pictures of the construction 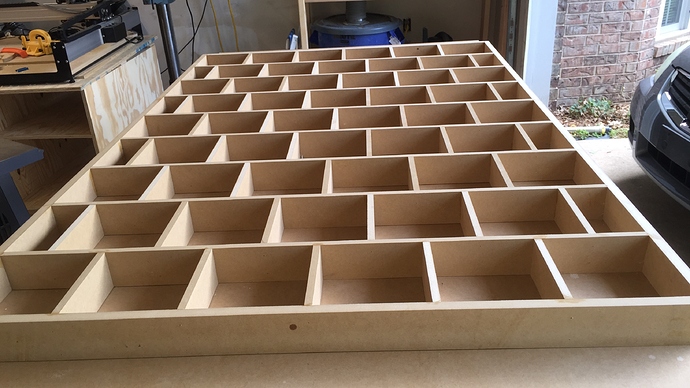 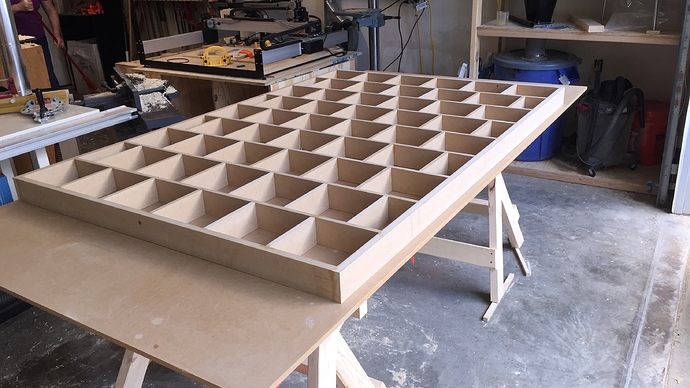 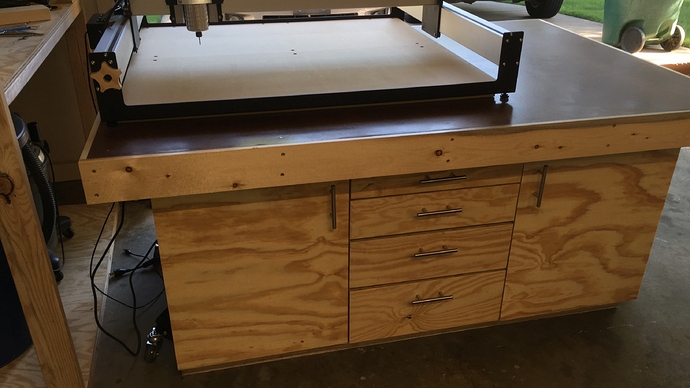 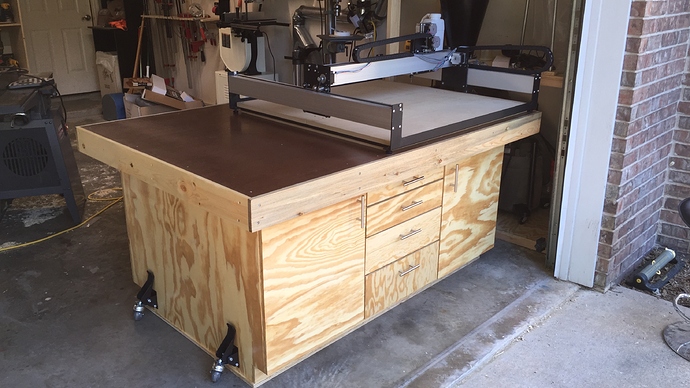 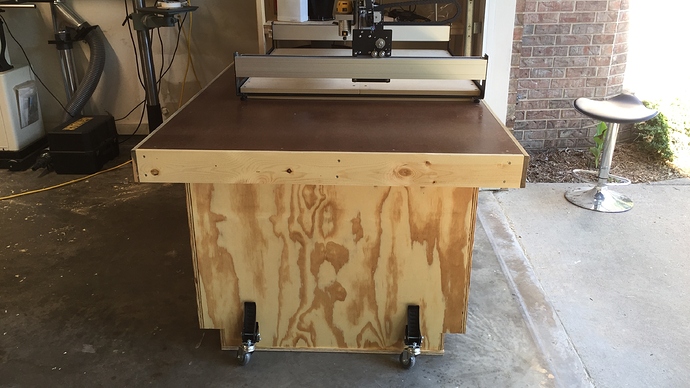 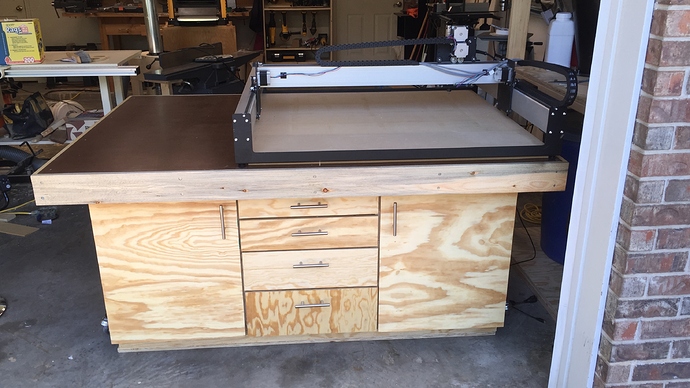 That’s very similar to where I was going with my torsion box design (that wood whisperer video is one that I used as source material). The main, outstanding element I had left in my Fusion project was offsetting the alternating rows of small pieces. My construction plan was to use hot glue to assemble the initial grid, rather than pin nails or pocket screws, so butting the ends wouldn’t make assembly difficult. I like the idea of leaving the other options available.

Well, I went the route of least resistance and it sure paid off in time saved. 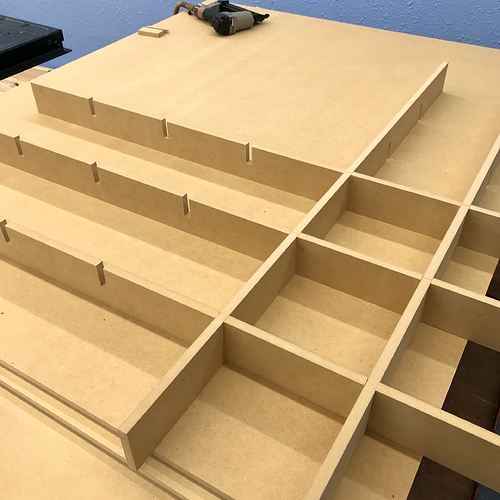 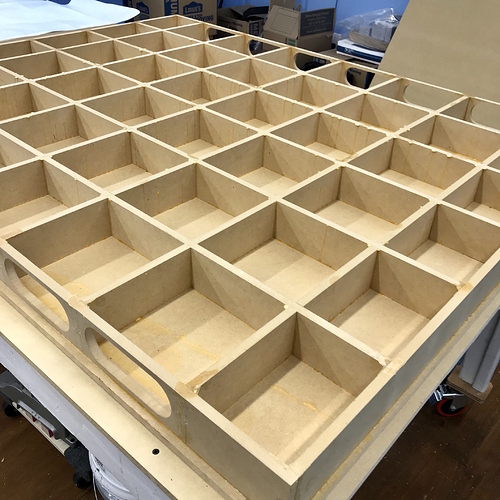 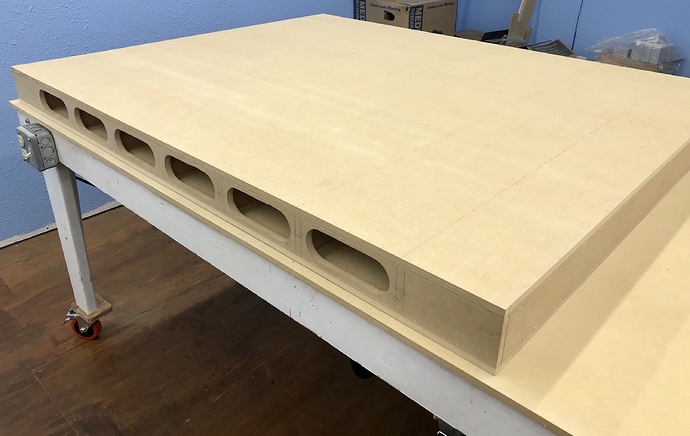 I ordered the plans for the Paulk Workbench II and built it over the holiday. If you are interesting in the plans you can purchase them off the Paulk website. Paulk Workbench II Website I designed it from the plans in VCarve Pro and cut it ALL out on my CNC. It assembled perfectly and was very easy to do from the plans. The only challenge was how to cut the long 2X8 foot sections on a 30 inch CNC. Fortunately VCarve Pro has a tiling option that works great for this exact issue. [image]

I drew mine up in SketchUp based on the S3 needing 4’ x 5’ of space (with accessories.) I might build a cover for it someday. Mine doesn’t need to move and has enough mass to keep it steady while carving.

What’s with the holes on the sides? Storage?

I’ve seen them used to admit clamps for clamping.

Now that I have a nice drawer under that table with a bit holder, I’m using those holes for storing double-sided tape, sandpaper and other accessories. I may build some tiny drawers to fit those holes.

Dang, Will. You just solved a problem that I’ve had with a slightly warped board. Since I have the corner fence/wasteboard installed on my table, I can’t get regular clamps into the right angle corner. I’m sure I can build a special ‘C’ clamp to reach the indexed corner of the board through the table. Thanks!

Updated the number of shelf joists to be parameteric and added generic casters with (rough) configurable dimensions and supporting material. Same link: https://a360.co/2E2R8Ef 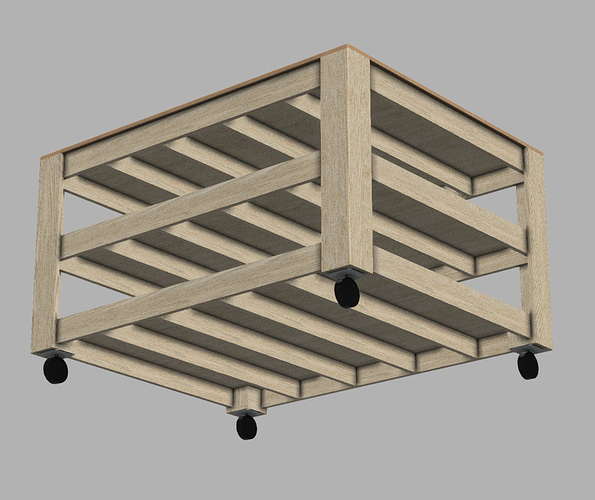 Going to integrate the torsion box, next.

This will protect the MDF edges of the torsion box and look nicer.

I believe we’re thinking along the same lines. The MDF top layer is intended to be sacrificial. The existing design has a top plywood “shelf” that sits flush with the legs. The light grain and shadows make it hard to see in the rendered image. That top shelf would be replaced entirely by a torsion box with the same overall dimensions and covered by the same sacrificial board.

Here’s a shot with the top skin removed: 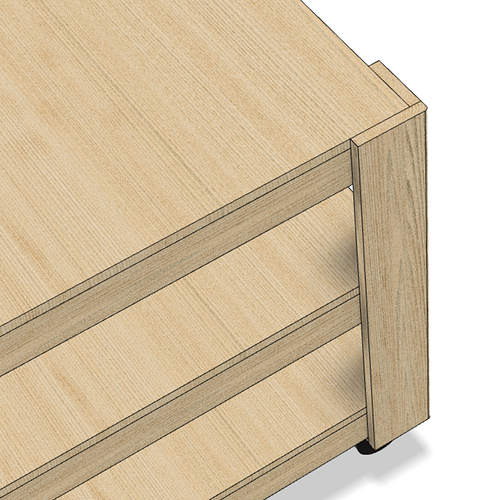