I’m sure this has been asked as thousand times before, yet somehow I cannot find any relevant post, I am probably not using the right keywords. While cutting circles (coasters…), I get this small groove at the point where the endmill starts/end each cutting pass: 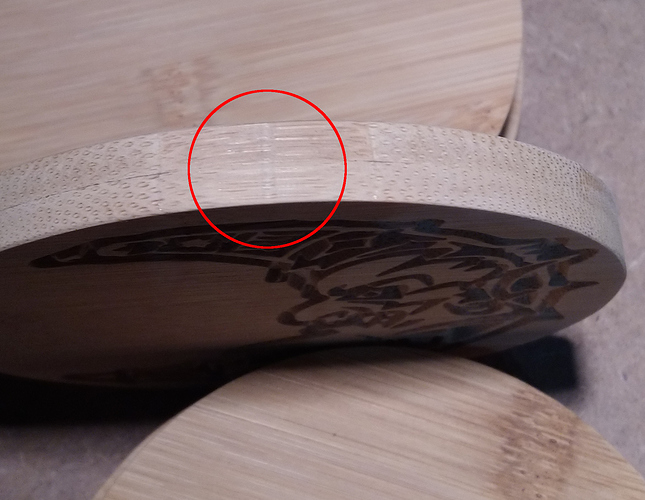 The machine deflecting and the endmill getting pulled into the cut as it dwells at that point as it plunges in.

Thanks Will. I suspected deflection but thought this was not likely due to using a 1/4" endmill in wood. It’s high time I get over my old habits/lazyness and systematically go for the roughing + finishing passes approach now.

i’ve also found that making sure the v wheels are snug and having a sharp cutter help.

I had issues with the same thing. As will mentioned a finishing pass works wonders here, or adding a long ramp on each cut - 1-2” will generally stop the problem too. I also get grooves when I’ve used tabs, I haven’t worked out how to fix that one, so I just don’t use tabs any more

I’ve seen the same problem many times. The spindle and gantry assembly for the Shapeoko is not particularly rigid. When you’re cutting a workpiece around its perimeter, the spindle has a tendency to deflect away from the workpiece by a small amount as its moving in X-Y motions. When the spindle is plunging, its X-Y position dwells at a fixed point and thus it straightens out and cuts a little deeper into the workpiece resulting in a scalloped cut on the outer edge of the part.

Here’s something that I tried to address the problem: Its probably not the easiest way to cure the issue, but it was very effective. The example below shows the geometry that I created to cut a simple obround part out of MDF. 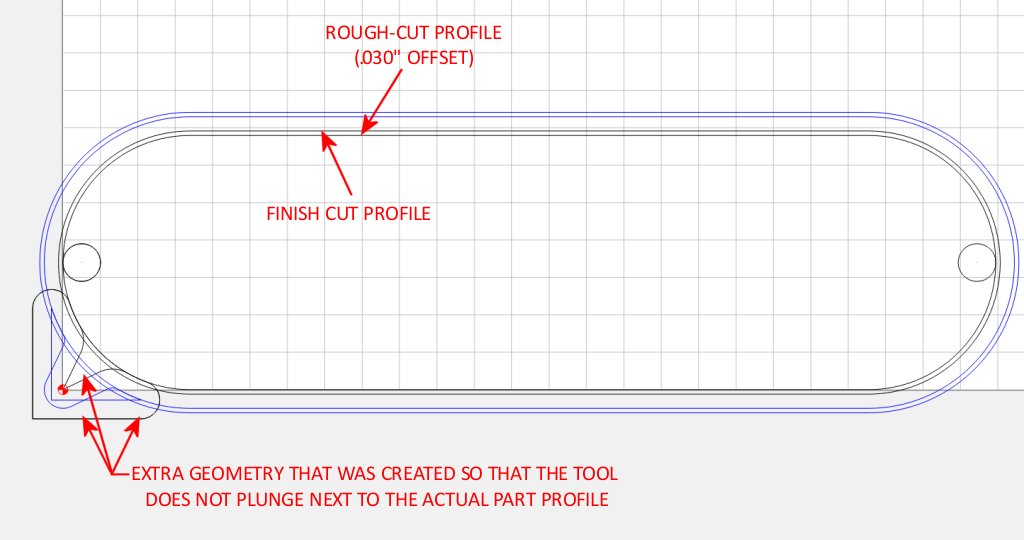 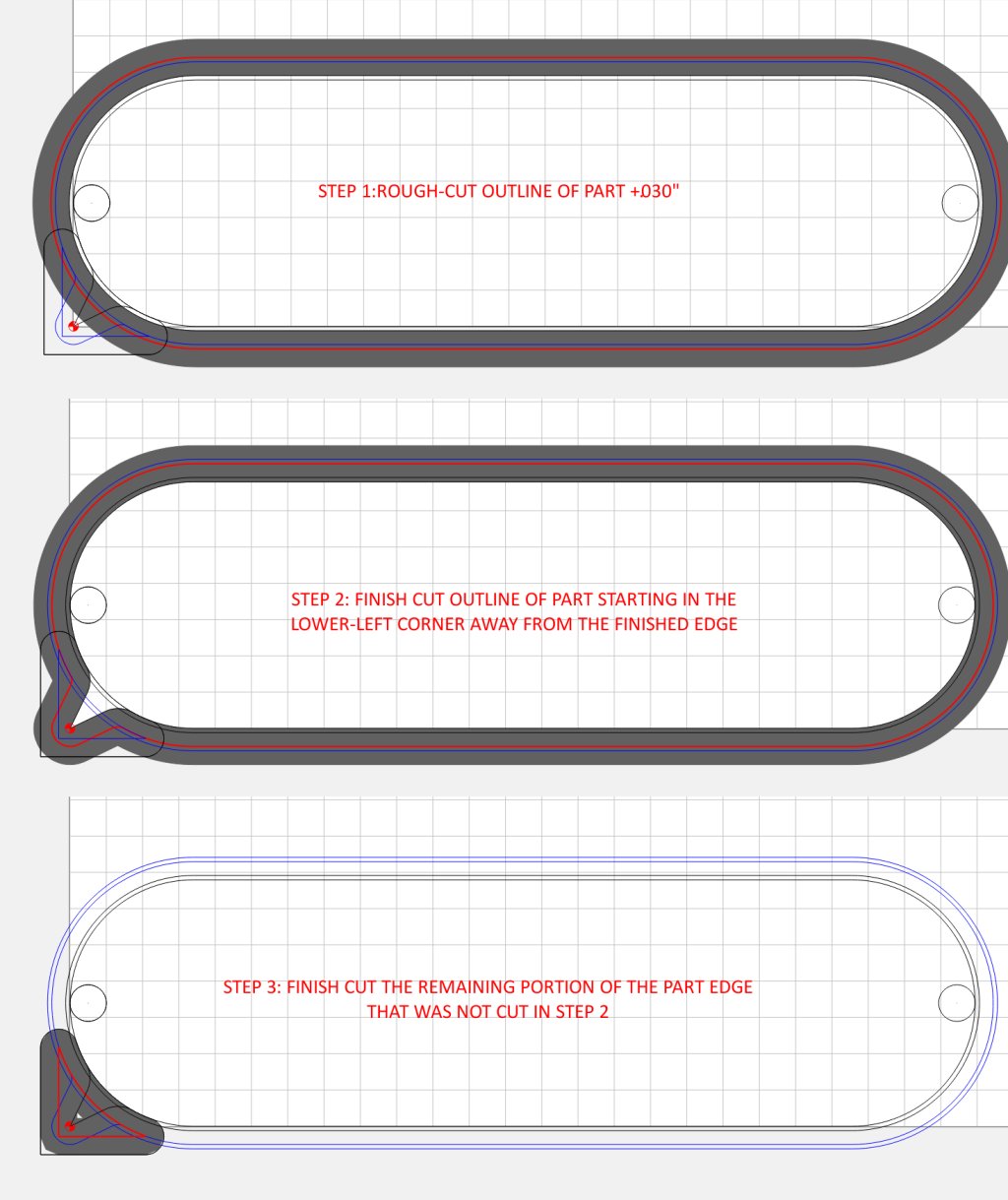 The others here have a bunch of good tips, also try reducing the plunge rate - it can be a little tedious/slow, but will generally help this effect a little too.

Thanks for all the inputs, this all makes perfect sense. Will try and report.
@Danelectro I really like the idea of ramping into the finish cut as an extra precaution! did you see a noticeable difference compared to just doing a regular finish cut ?

Plunging outside the of the area where the finished edge is to be prevents the scalloped groove issue from occurring. The appearance of the machined edge was consistent all the way around the part. The only drawback is the necessity to do a little more CAD work up front.

Something I haven’t tried yet but will the next time I’m using the machine, is to simply make a second finish pass around the part to see if that might eliminate the scallop. As I mentioned earlier, I believe that the spindle is deflecting away from the part as it follows the tool path, but it cuts a little deeper into the part where it dwells during the plunge. Maybe if the cutter were to make a second pass (nice and slow) around finish-cut toolpath, it would allow for it to remove another .001"-.002", thus making the scallop less apparent.

I take away from all comments that I basically have two options:

If you’re doing VCarve then you should just ramp your plunges.

This is a part that I programmed in Carbide Create this morning. I was using a .250" cutter, so I offset the part perimeter by .125" and extended the intersecting lines of the part’s lower-left corner in order to create the start and end of the toolpath. When programming in CC, the offset direction is set to “No Offset” so that it follows the drawn path: 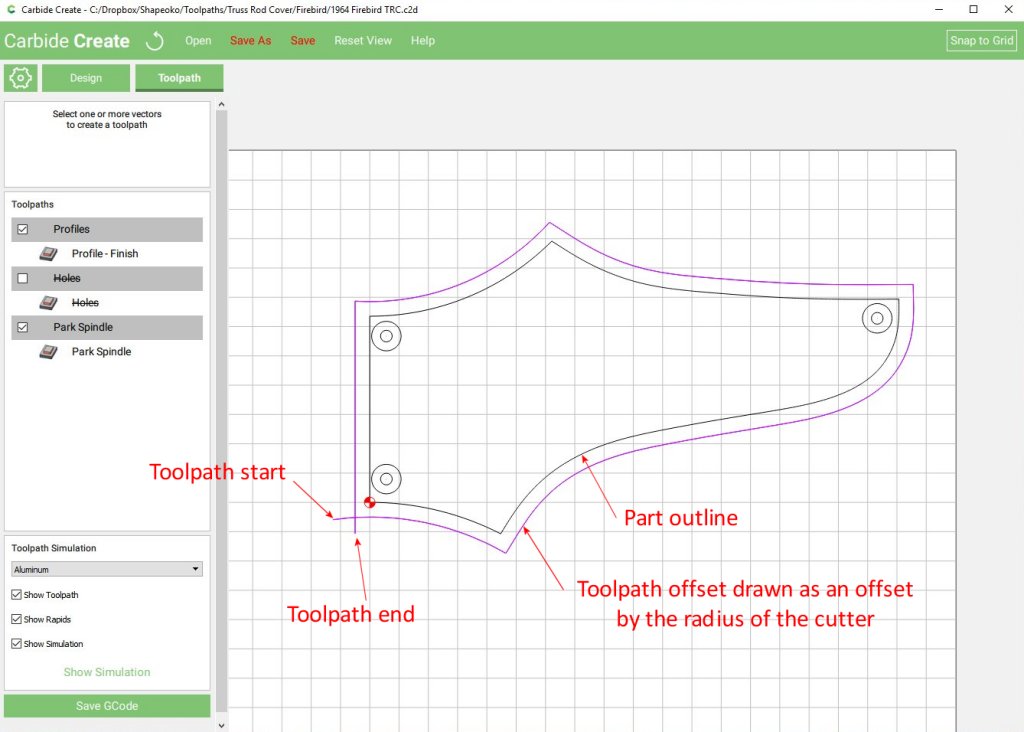 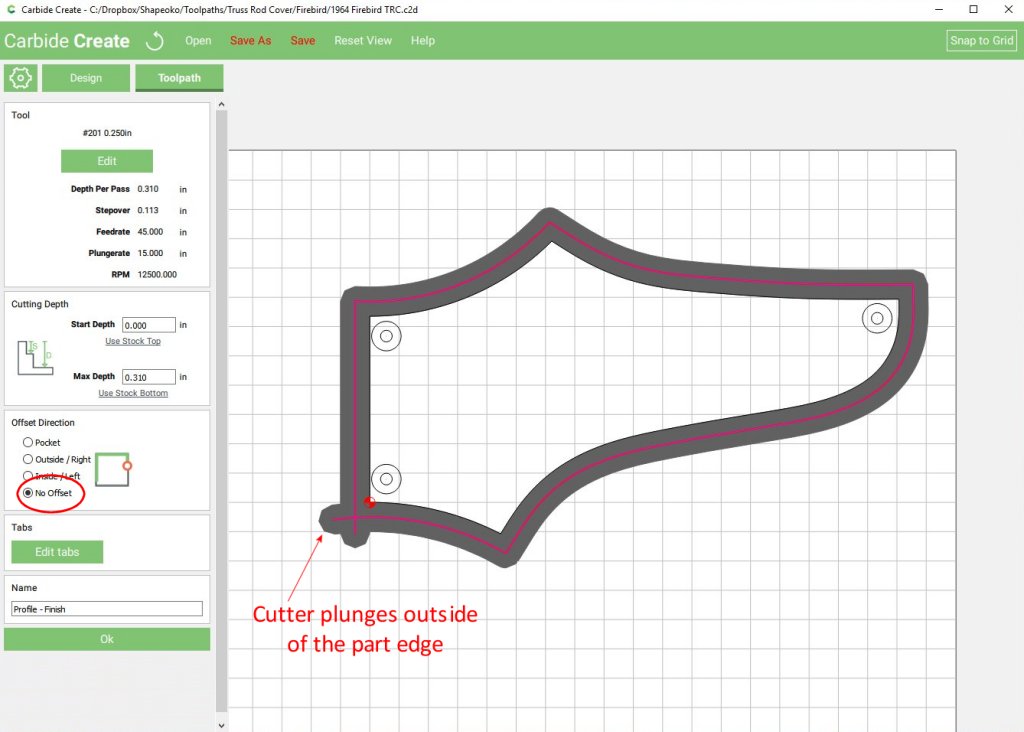 If you’re programming a circle, offset the outline, draw a couple of tangent lines, and then trim the circle to the lines (then circle geometry will actually become greater than 360°). This way, the cutter drifts into the part at a tangent, circles the part around its entire perimeter and then drifts off at a tangent. 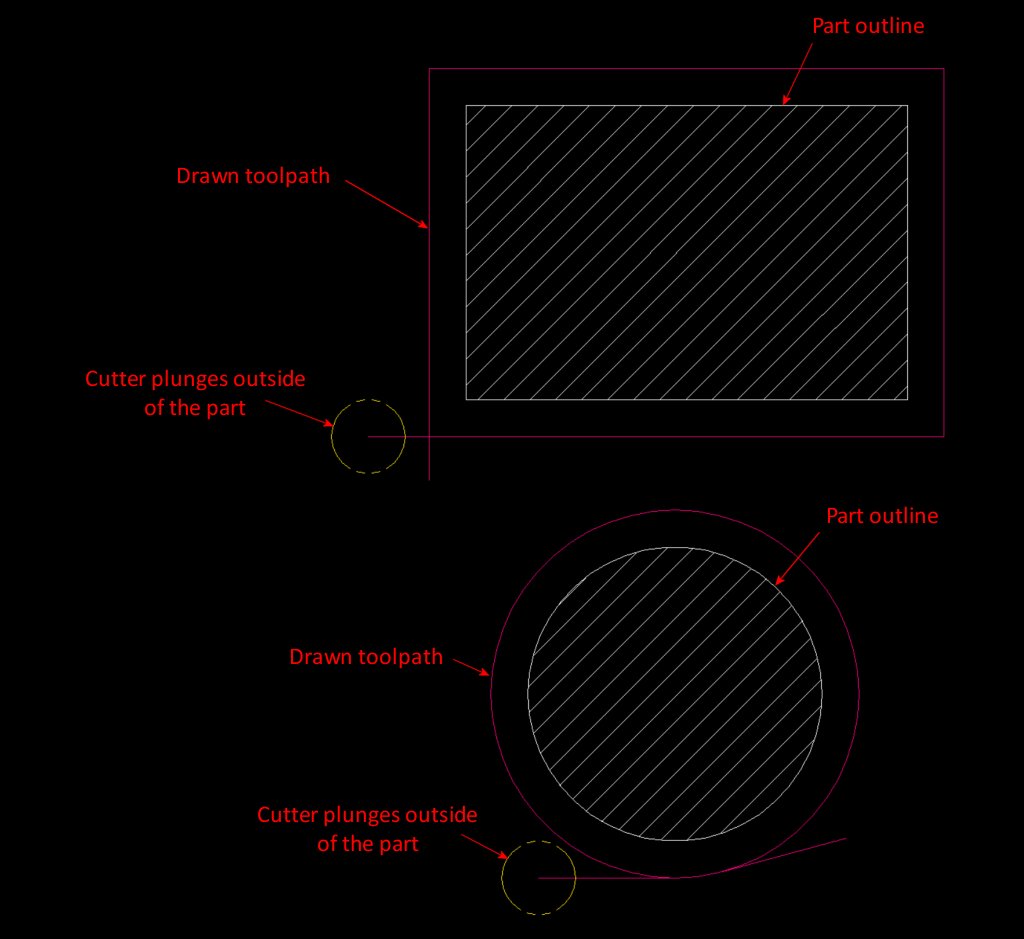