Any forecast for when the XXL & XL Upgrade packages will ship?
+1

My XL shipped out yesterday and was on my porch when I got home today! 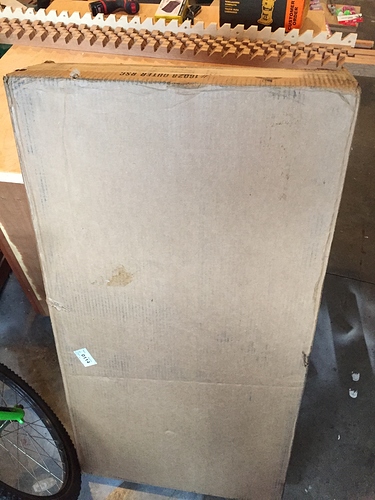 I got mine too!

Missing a few components (adjustable feet, limit switch kit) but I put a ticket in with Support. I wish it had an Official BOM and instruction manual though . . . Right now it looks like I’m going to have to piece together instructions based on the figures/descriptions others have posted on the forum.

I’ll have to open mine when in a bit and see if everything is there…ill try to report back later.

I’m missing the feet, limit switch kit and cable track brackets. Where did you go to put in a service ticket? I sent an email a little bit ago, however, I want to make sure I’m taking the right avenue.

Thanks Craig. Appreciate the shout back.
-Garry

I unpacked my XL earlier today, as far as I can tell, I’m missing the same components. I’m going to give it another once over tonight and email support.

Now that you mention it, I am missing the track brackets as well, so the same as both of you.

That’s (kind of) comforting that there is some order to the missing parts and these aren’t being shipped out with various differing missing parts. It should make the follow up shipment rather efficient.

Yep, it looks like I’m missing the same components.

Yes last I was told the cable track brackets weren’t going to be ready till sometime mid this week. I never even noticed I was missing the feet, but just checked and sure enough nowhere to be found. I guess I’ll have to let them know along with everything else I’m still waiting on. Haven’t heard from them in a few days, so for now I just stare at the boxes while I finish up the stand for it.

Just curious, what is the last order date which has been filled on the XXL? Last week it seemed like it was Feb. 28th. I ordered on Feb. 29th and so far no joy. Anyone outside this order timeframe get a machine, or a notice that one is on the way?

I’m beginning to suspect that a forum post about further delays is coming any moment.

I’m afraid you might be right. I unpacked and inventoried my box on Saturday. I reported the missing and damaged items and received a response on Sunday. Since then I haven’t received anything. All my emails have gone unanswered.

It wouldn’t be a shock. I’m torn between the natural desire to have the thing, and wanting them to get it right. Getting it right wins, but OTOH I was a kid who woke up at 5:00 AM every Christmas Morning, so…

When I saw Feb. 28th stuff going out, I thought my Feb. 29th order would be hot on its heels. Then they had the delay on XXL (supposedly until Mon. or Tue.) waiting for more MDF bottom boards. We’ll see.

I didn’t have homing switches or feet either. But I didn’t see feet in the parts list. Putting it together now. The controller board doesn’t seem to go on the gantry anymore. The screw holes are on one of the two shorter Y extrusions. I’m putting it on the left. Any Ideas if that is right before I get too far?

My understanding is that’s right.

I ordered my XXL march 23rd and I have no tracking number yet. Order number 2698.