SO3: How to mod the Dewalt DW611 for remote speed, light and power control

I put this post together in about two hours so its not refined but it will give you the idea. I thought it would be better to post it as a rough overview than to not post anything. Proceed at your own risk. This will certainly void your router warranty and if you make a mistake it could ruin your router control card.

The Dewalt DW611 router that is an option offered by C3D has built in closed loop speed control so its a nice router for the price. It pretty much stays close to the speed you set it to even when under load. It also includes LED lights in the bottom that turn on when the router is on.

This mod is essentially free other than the cost of a 5k linear pot ( a few $ and the wire needed). It allows you to control your router between 16.000-27,000 rpm. There is a PID feedback controller (mods, feel free to insert link here if you want) called Super PID. It allows you to go down to 5,000 rpm without losing torque as well as use g-code to control the router. I think it costs around $150. 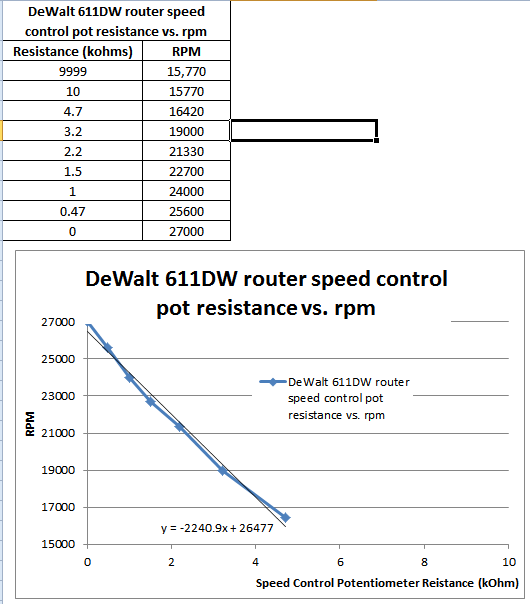 In this post I’ll show you how you can hack the router to provide the following benefits:

What you will need: 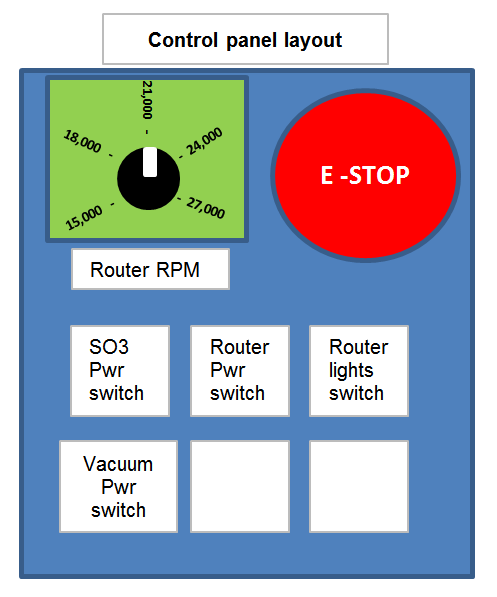 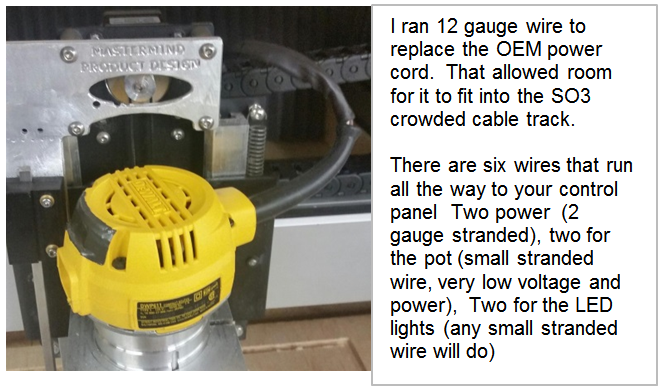 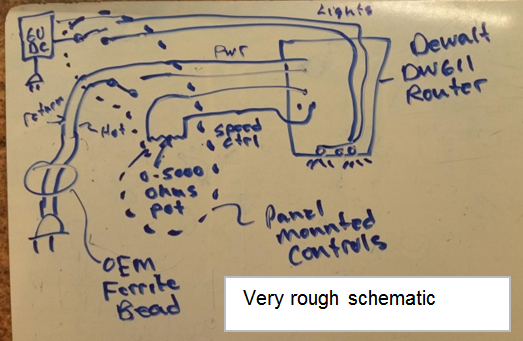 The router has an integrated hall sensor that reads a magnet on the end of the motor shaft. This is used for closed loop feedback so the system can add power under load to maintain the rpm setting. This is a great feature.

You may ask why I didn’t just use a router speed controller. That’s much easier… A router speed controller will adjust speed remotely but because of the way it controls speed you lose torque as you lower the speed so as the load increases the router rpm drops off significantly. This isn’t good when you are trying to maintain cut quality.

*Make sure the router is unplugged before you start!

STEP1: remove the DW611 from the SO3 mount.
STEP2: remove the 4 star head screws from the top and one from under the top
Pull the top off carefully to reveal the following… 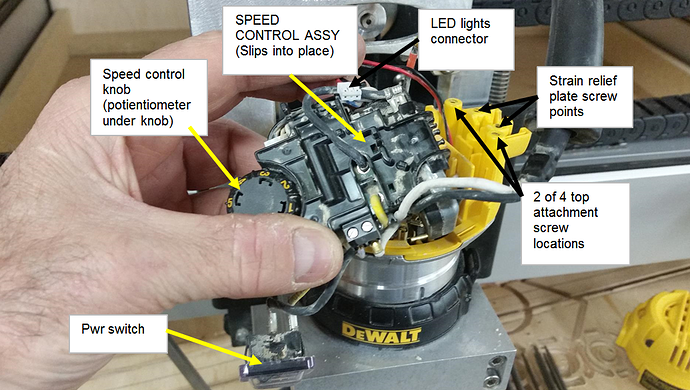 You don’t have to cut the OEM power cord but I replaced it with my own wiring so I could fit it all into the cable tracks. The OEM cord is too fat to fit into the tracks. Its not good practice to run 120VAC in the same track as low voltage wiring because a short could cause what you think is a low voltage line to become high voltage. It can also cause EMI issues. I’ve jogged my machine with the router running and didn’t see any EMI issues.

This picture shows the underside of the control card and more wiring. 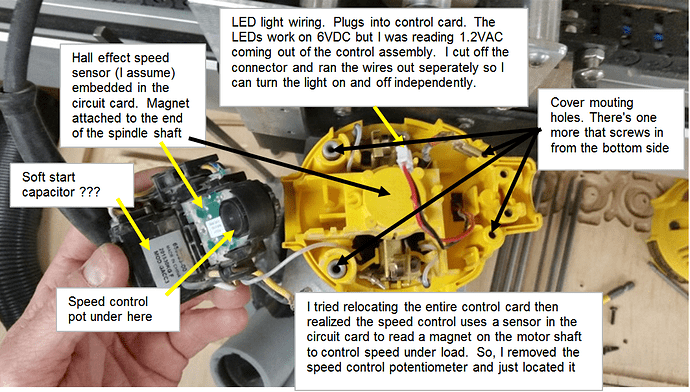 STEP3: Remove the OEM speed control potentiometer. You might want to watch a YouTube video about how to desolder components. Its not hard but knowing a few little tricks will make it less frustrating with less chance of overheating other components on the control board. 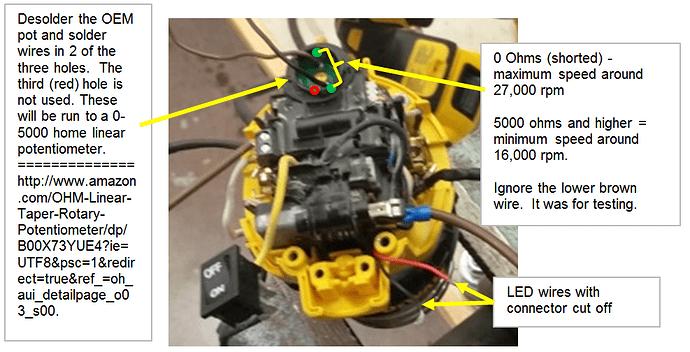 STEP4: Solder small gage stranded wires into the two holes shown. The third leg of the pot was unused so you don’t need to do anything with it.

STEP 5: I removed the router switch but really its fine to leave it in place. Just leave it turned on. If you choose to cut the power cord cut it close tot he control board so you can run the new wires through the strain relief. Cut the connector off of the red and black LED wires and solder small gage stranded wire onto them. Make sure you note which one is positive and which is negative. The red is positive. I’m not sure but it may blow out the LED’s if you connect them with reverse polarity.

STEP 6: Run all six wires (2 power, 2 pot, 2 light) through the strain relief. It wouldn’t be a bad idea to put heat shrink tubing over them also. There’s a metal tab that holds the wires in place. Depending on your wire size you may have to grind out the channel for the wires to accommodate the larger wire bundle. I had to do that. If you want to go by the book you would run the low voltage LED and pot wires out of a separate hole and not place the 120VAC power wires in the cable track. I didn’t use “the book” and ran them all together.

STEP 7 (optional): If you have an enclosure you can twist each set of wires using a drill after it exits the enclosure. That makes the wires look much better and they are easier to handle.

If you think of steps that are missing just let me know and I’ll fill them in as best I can.

Where did you get your E-Stop button?

I found one here but looking for a better alternative;

This is not unlike what SuperPID has one do - except that it adds an optical pick up and provides additional RPM control. Depending on the router, it is possible to go as low as 5K RPM.

Where did you get your E-Stop button?

I bought the EStop and switches on Amazon.

There’s no need for an optical feedback since the router provides closed loop feedback itself.

The advantage of Super ID is being able to drop to 5000 rpms vs.16000 which allows more cutter options.

The advantage of this mod is that it’s essentially free vs $150+ for SuperPID.

If I decide to spend money on an upgrade it will be for a real spindle with a VFD. So far I’ve been able to do everything I’ve tried pretty quickly with this setup.

The advantage of this mod is that it’s essentially free vs $150+ for SuperPID.

If I decide to spend money on an upgrade it will be for a real spindle with a VFD.

I would certainly go for a spindle when possible. A spindle upgrade is easily more than $150, the mount has to be changed out, and things need to be realigned.

For some, that is a lot of bear and SuperPID is a very viable option to gain flexibility… especially the lower RPM range.

I can’t say how well the Dewalt or any other router holds it RPM well under load. Closed loop should do a good job. SuperPID provides a close loop for all routers.

Free and easy are always a popular when there’s no downside.

Having control of the spindle lights and being able to run the router power cord through the cable tracks are bonuses.

Sorry to bring up such a old thread, But the led’s from the router are only two wires. A red and a black, one from each led. How did you wire that up?

he led’s from the router are only two wires. A red and a black, one from each led. How did you wire that up?

I ran the LED wires across a 6VDC power supply and across the control panel switch. Basically the LED is completely electrically disconnected from the router. I posted a picture labeled "very rough schematic " early in the thread that shows it.

I believe the LEDs must be wired with the proper polarity or they will burn out so make sure you measure that polarity before disconnecting them from the router.

Feel free to ask if you have any other questions.

The LEDs are DC driven, not AC like the router. In this case, common convention is that the RED wire is Power (VCC) and the BLACK wire is ground. There should not be one wire per LED, but a single power and ground for all LEDs. If the power requirements are 6 volts DC, then you would connect the positive side of your supply to the RED wire and the ground/negative side to the BLACK wire.

Thanks, I was able to take a better look at it last night. It looked at a glance to be 2 led’s epoxied into place with one wire each. But, it has a wire running around the bottom between the two that was difficult to see. I was looking at the led assembly that was removed from a router that had a split shaft that i had to tear apart to try to save my precise bits Collet and nut. Which i was unable to do. But yea i just hooked it to a 9v to check it and it does work. Thanks again! This forum is the best!!

But yea i just hooked it to a 9v to check it and it does work. Thanks again!

The LEDs may burn out quickly at 9v. I can’t remember now if 6VDC is what I measured going to the LEDs from the router or if I just hooked them up to a power supply and turned up the voltage until they got as bright as I needed.

My impression is that the Super PID will maintain torque at the lower RPMs where a variac and other passive systems will not.

Probably true. I don’t know if a SuperPID will work with a router that already has closed loop speed control. Make sure you check with them before buying one. The speed control on the Dewalt is very good at maintaining RPM under load so unless you need lower RPMs you don’t need a seperate controller.

No, it will not. To do so, you remove the closed loop control.

I have a Dewalt + SuperPID. To install you bypass much of the router electronics and install an optical sensor(as Mike mentioned above). I bought it mostly for the low speed options (5,000-30,000RPM range). It is pricey and a bit of a pain to install, but it works very well. If had to do it all over again I probably wouldn’t change a thing, happy customer. I like the subject option as well since it’s mostly free. It’s been awhile since I read this write up, could it also be used to slow the Dewalt down below the 16,000 minimum?