Someone tell me why this is a terrible idea. Trying to get more Z clearance

Recently I’ve been upgrading to the HDZ and a 2.2 KW spindle on my XXL, a few steps towards my eventual wish which is to get it working with a 4th axis. I know that might mean replacing the control board since GRBL doesn’t support it but it’s all still in the idea phase right now. However, one of my problems is that, even with the HDZ, there’s only 3.75" clearance between my wasteboard and the bottom of the HDZ. That doesn’t leave much room for stock should I ever add a 4th axis. I’ve seen people cutting holes through the frame of the XXL to lower the 4 axis and thus make room for stock but I’d rather not go that destructive on my beloved Shapeoko if I’m uncertain of the outcome. While chatting with a friend in front of my machine, they gave me an idea for gaining more Z clearance that seems way too simple to be a good idea, simply raise the Y rails. If I made a strong steel plate that bolted to the end plates and essentially extended them higher, could that work? I’ll let pictures explain it better than I can.

Shapeoko Z extension plate11828×894 353 KB
You would need a spacer the thickness of the end plate sandwiched between the new plate and the Y rail but that shouldn’t be difficult to make. You would be raising the rails so that the top holes on the end plate would be in the bottom threads of the Y rail, raising the whole thing 65mm or 2.56". That would give me a clearance of 6.25" between wasteboard and Z gantry, which I think would be plenty.

What does everyone think? Would it go all Hindenburg on me? Lose even more rigidity? Be a waste of my time?

That’s pretty cool. Maybe an “L” at the bottom of the new plate for rigidity.
Another thought,
Take the waste board and mounting rails out and raise the machine frame.
I took my waste board and rails out and built my workbed/spoil board onto the table top. Screwed the frame to the table and screwed the spoil board to the table. No more table bounce or sag and I can raise the frame anytime I want.
I can change clearances pretty easy and tbh I like this much better than the supplied spoil board frame.

I think that’s been done before. I say go for it!
In the meantime, if I come across the picture I think I remember seeing (somewhere on this forum, I’d guess).

should work, there’s bunch of instances of similiar.

may want to look into sub plates for the bed for small (low) parts. keep it within reach with stub tooling

Go for it! Please shoot video, too!

Give it a try man ! It will get more Z clearance for sure Bravo

So simple and so awesome! When I’m back to work I’m going to have to build a set of these on the mill

. Have you thought about one plate, instead of the the two plate solution? Please post pics and info as you go, I’m super interested!!

Didn’t @RichCournoyer just do this?

How they working out buddy?

Well, they look beautiful black power coated…awaiting installation. I need to run one more Carbide3D (CC) 3-axis file. I just finished my first 4-axis Shapeoko Program and will install the riser plates and test them and my first program on the completed rotary 4th axis…so I’ll let you know in a few days. 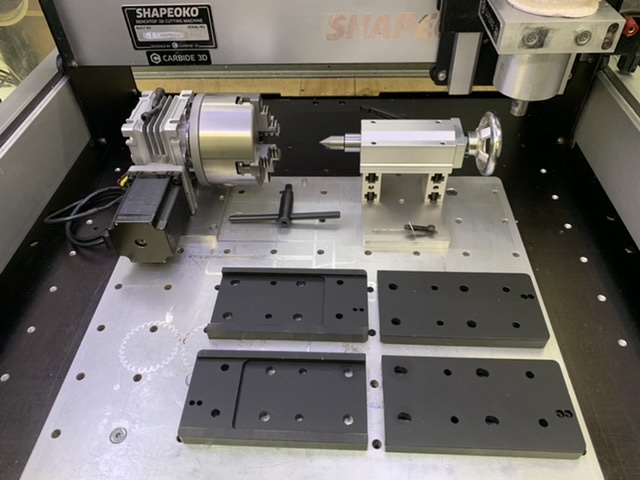 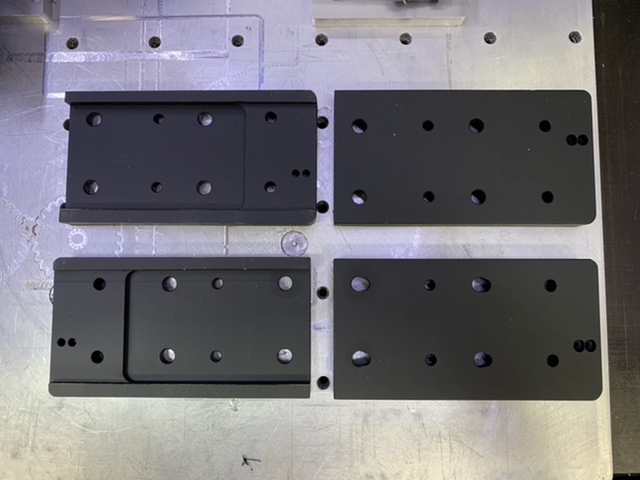 It looks to me like C3D is in the best place to provide “extended” plates. Then they would still be one piece, with the same precision and wouldn’t need any changes to associated parts. Since they are outside the motion area of the machine, they could even be supplied as standard with a new HDZ model.

I like @RichCournoyer version of extensions, because they interlock (capture if you will) and reinforce the current plates. I’m a little concerned about getting the machined plates with the good precisely positioned holes in my case.

That definitely would be better and increase the rigidity but I don’t have access to a mill that can cut steel. My cuts would be pretty basic and holes drilled out at the drill press.

Whoah, Nice work! Are your plates Al or steel? I assumed I’d want steel for the extra rigidity but I’m no structural engineer. Also, where did you get your 4th axis parts, control board?

PS: You’re IG is answering all my questions. Looks like you’ve got another Follow. I’m going to keep on top of your progress!

The HDZ has almost 6” of travel so that helps but, if need be, the new spindle is a beast and around 12” long. In a pinch it can easily be slid down in the spindle bracket.

Hi guys, this is something we looked at and considered. It’s a pretty unique use case (it also requires a few general machine mods).

If we got real interest we would be happy to make a raise kit.

Luke, we want and need these and maybe C3D can make a buck or 3.

I think these would be a great thing to offer. However, after seeing @RichCournoyer ‘s plates, I found my excuse to really dig into aluminum milling.

I would definitely be interested in a set of these!

How about a kit with longer extrusions? I and a number of others would jump at that. And very little engineering needed on your part too.

Well, I for one am a BIG fan of the rigidity of the S3, and make my adapters so that I can add them, and remove them as needed. But that’s the way I roll…