Use a current/up-to-date version of Carbide Create.

I have the most current and up to date version of Carbide Create. I have checked for overlapping and intersecting vectors and paths. Still the carving is not clean and crisp like the photo. You wouldn’t want to send me the nc codes for that carving would you? Thanks.

It could be a number of things:

This calendar is an intricate design, are you able to produce clean cuts on simpler/larger V-carve jobs?

Bobby - Can you post a picture of the tool path carving that’s not working out? I’ve also done several calendars and it could be the number of outside boundary lines. This is most noticeable in this example is in the heads of the characters. 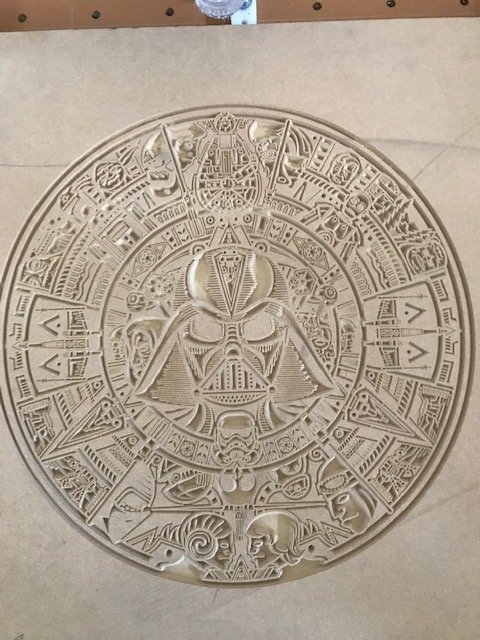 IMG_3401480×640 86.4 KB
Notice how they are cut out instead of just outlined? I was able to fix this by adding another trim ring around the outside, resulting in this, not quite finished with paint though: 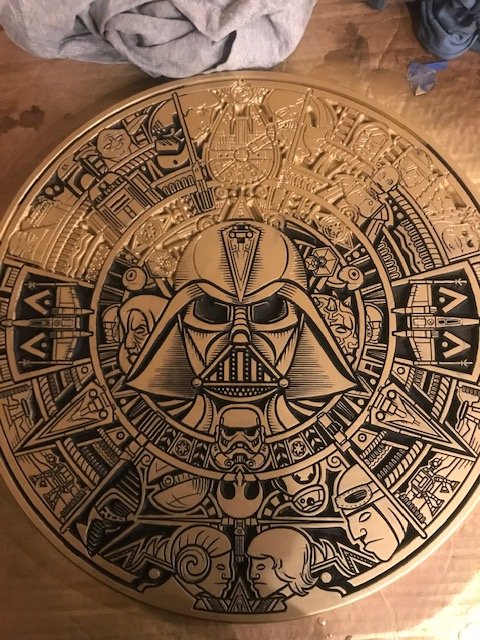 I’m attaching the Carbide Create file. I really appreciate your response. I have only had my Shapeoko XXL since the end of January and am still very much a novice at all of this. Everyone keeps telling me that the cnc may be out of trim, but I don’t even know where to begin with how to trim and what tools I wilI need to trim the machine. Other Vcarve projects have turned out pretty good for me in the past (flags, est plaques etc). I used a 90 degree vee bit. I just ordered Amana Tool 45624K with a 1/4 shank. They should arrive tomorrow. Again, thank you for taking time out of your schedule to help me with this. My son and son-in-law are a huge Star Wars fans and I would like to make this for them. This is my retirement hobby BTW.

Thank you for attaching the file. Based on what I see, the file is missing most of the detail and outlines that make a v-carve this complicated work. So I think that that its unlikely anything wrong with your machine, which would be good news.
Take a close look at the file you sent and compare the detail lines with the pictures above and you’ll see what I mean. Check out the link I sent you in the message, create an account and then see if you’re able to download a complete file. Pretty sure that you’ll find a DXF or SVG format available there. The SW calendar in the example picture was for a friend that’s a nut about SW also. We’re going to do an epoxy pour to level it and make it into a lazy Susan. His wife is so tolerant

EDIT: You’ll probably have to remove the outside rectangle also and set that as a separate v-carve. The main carve will work better by doing so.

not quite finished with paint

What’s the method for painting?

I don’t see a link for the sav file?
Bob Jordan

I applied two coats of shellac by brushing allowing time to completely dry between coats. This seals the MDF really well so as to not use a lot of the other paint to do so in the next steps.
Waited a couple of days to make sure everything was completely dry then sprayed with a bright metallic gold. Others have suggested using a darker metallic, but I find the next step darkens things up.
Once the gold is completely dry, I used a water soluble paint from the local craft store. I just brushed this down into the cut spaces in small sections, let it dry just a bit and then used a damp cloth to wipe the surface clean trying to keep the cloth on the dry side. I’m sure a sponge would also work. If a bit much gets wiped off, just reapply. The photo above shows how the gold is dulled just a bit from the residue of the darker color. Enjoy!

My son loves anything Star Wars. I am wondering if you would be willing to give me both the .cd2 and .cn files so that I could cut this for him as a Christmas present.

Thanks for thinking about this and blessings

A few moments ago I asked if you would be willing to share the .c2d and .cn files. That was before I found out that you used Vectric software. Carbide motion cannot run files created in that software. However, you could save it in a format that would run on Carbide motion.

Well that’s a big surprise to many of us here on this forum!

We use our Shapeokos / CM with Vectric all the time

What you can’t do is use his source files (since you don’t have Vectric software). Because of that, you can’t create the gcode that CM will use to cut that piece.

However, that doesn’t mean you can’t find / create the artwork to make your own version with CC!

I just made a reply to this, but I feel like I need to follow up with one more thing. You say, “However, you could save it in a format that would run on Carbide motion.” I don’t know how you do that. From what I understand if you have a recent version of Vectric software you can save gcode in various formats, some of which will run as you say. However, I don’t think it is possible for gcode files created in Vetric to be changed otherwise. If I’m wrong please let me know how to do that.

The confusion here is that you said:

Carbide motion cannot run files created in that software. However, you could save it in a format that would run on Carbide motion.

I believe that for the first part of that you meant “Carbide Create”.

I have a thought that may have already occurred to all of you, but in the event it has not I will go ahead and share it.

My thought has to do with leveling the machine. Take a large piece of something conductive, large enough to cover the entire work surface from corner to corner, in essence turning it into one giant touch pad. Next, under each corner place a small motor capable of moving it up or down. Write a software program that moves that machine from corner to corner taking readings, just like the touch pad, and sending those readings to the small motors under the corner of the work top, moving it up or down as needed, and looping that process until it eventually reaches a perfectly level surface.

I don’t know what the cost of something like that might be, but spread over a number of customer it might be profitable. I know that I certainly would be willing to make the upgrade.

That sort of thing is done for PCB manufacture and some folks have done it for V carving — bCNC and a few other opensource communication/control programs support it — the feature is known as “auto-leveling”.

the feature is known as “auto-leveling”.

Sorry, Will, I’m purty sure that auto-leveling for PCBs is a mapping process that eventually changes the zero offsets.

My thought has to do with leveling the machine.

It should be stated that “leveling” is not what is important to a Shapeoko; stability, flattening, squaring and tramming are.

Mark, your suggestion is what I call an extreme case of over-engineering.

and sending those readings to the small motors under the corner of the work top, moving it up or down as needed, and looping that process until it eventually reaches a perfectly level surface

This would require a pretty complex (and therefore expensive) mechanism, since there are somewhat significant forces being applied on the wasteboard during a cut (e.g. an upcut endmill pulling on the stock). The auto-leveling approach that Will mentioned achieves the same “perfect virtual flatness/levelness” by not moving anything but modulating the G-code values depending on the result of the surface probing.

Take a large piece of something conductive, large enough to cover the entire work surface from corner to corner, in essence turning it into one giant touch pad.

There are probes out there that trigger upon mechanical contact, not electrical contact, so they don’t even require to cover the surface with something conductive. See this thread for example, quite interesting use of such a probe.

Yeah, what @Lookin4help described goes a bit beyond that, and introduces so much complexity that there would be a lot more opportunities for things going wrong.