In theory a .2 plug will fit tightly in a .2 pocket – in theory. IF (a big if) everything was machined perfectly with no little bumps or anything to get in the way. But, in order to have your inlay actually STAY there, you need glue. Glue takes space, maybe not much space, but space. So if you had a .2 plug and a .2 pocket, then added glue to that pocket - all of a sudden the plug can’t go as deep as it should. So you need to machine for that space the glue takes - hence the .2 pocket with a .18 plug allows .02 for glue. Glue probably doesn’t require .02 but it also allows more room to REALLY SQUEEZE the parts together to get the tightest fit especially with the smaller v-bit details.

So yea that makes sense and that’s what I assume would happen yesterday when I did a .2 pocket and .2 plug with a start depth of .05. But instead then entire plug was loose and it wasn’t touching the bottom of the pocket like you’re explaining.

You’re leaving 0.15" of your 0.20" pocket empty doing it that way. Small details might not even reach the female side at that low of a start depth.

do the diagrams in Using "Advanced VCarve" in Carbide Create 461 to make Inlays - #5 by fenrus help draw the dimensions ?

Yes. In addition to @fenrus diagrams, look at the diagrams and post in the link I shared above

Well then I may be explaining something wrong because both of my pieces sit flush against eachother (the top of my cutting board stock and the bottom piece of wood I used for the plug) there is no gap. And my .2 plug is fully inside my .2 deep pocket but it is lose, so when I glue it and remove all the excess material there are gaps all over my lettering. That tells me my plug needs to go deeper (or it needs to be wider) to fill in the pocket

This makes perfect sense, but mine is not doing that. My plug is going fully inside my pocket, where as this demonstration shows the plug unable to fit inside the pocket. That is where this doesn’t make sense

Here is what I am talking about. Pocket .20/ Plug start depth .05 flat depth .20… and the plug is loose inside. Also, in addition to this, I updated the toolpath for the plug to start depth .18/ flat depth .02 and nothing shows up on the simulation… Am I crazy or is something wrong? I attempted a .150 start depth and .20 flat depth and it made it even thinner.

Which bit are you using? Is it actually 30 degrees? For the .18/ flat depth .02 it should be .18/ flat depth .20. Not sure if it was a typo earlier or somebody used to vectric VCARVE (carbide create is asking for the total depth for the second parameter while vectric asks for depth below flat surface, so you can’t directly copy numbers between programs in the vcarve template)

Yes it is a 30 degree… And I was wondering the same so I tried .15 start depth and .20 flat depth and it came out even worse than my original .05/.20… I am incredibly confused what start depth does with Carbide create. So the deeper the start depth, the thinner/ smaller the plug will be? If thats the case I need to go less than .05, which I might as well go to .0 and not even have a start depth

The start depth is the depth where the two parts will meet. Meaning with the .15 .20 setting there should be 0.05" between parts and 0.15" overlap on large features. Thin features such as your smaller text will not be full depth because then the width will be wrong.
Can you take a picture of the female part that you carved already? I’m stumped and really not sure what is going wrong. 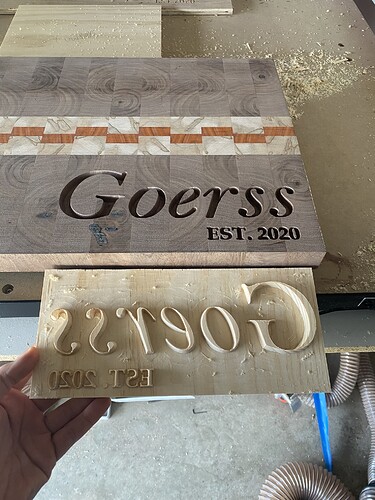 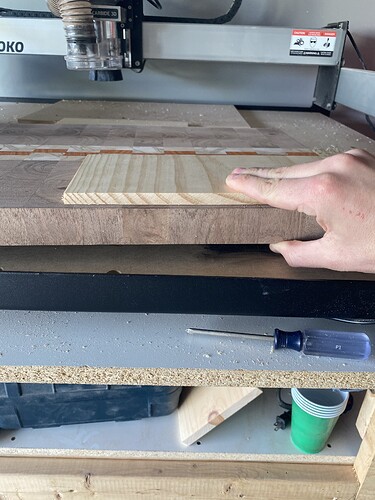 huh. I must not have the font you used, because when I open in CC the font is really blocky, so clearly carbide create is swapping fonts out. It should really throw an error when it does that and ask if you want to continue. I also cannot look at your tool library either, so have to go by your description of the bit

Based on the discrepancy in your carving it is either carbide create has an error somewhere or your bit is actually a 60 degree bit.(but the angle on the sidewall looks correct)

I can’t think of any way of saving your project other then epoxy filling the text. You could try faking it out by doing a 0.05 / 0.40 vcarve and then zeroing 0.2" above where you would normally zero in the material. That should make the text wider, but not sure if the geometry would be correct then. It would also be a very long cut with most of that cutting air.

I must not have the font you used, because when I open in CC the font is really blocky, so clearly carbide create is swapping fonts out.

I may have got this wrong, but whatever your design is in CC, others viewing it will see something different if they don’t have that font used in the design installed on their computer.

Having said that, CM will do as it’s told, and the final cut will (should!) look the same as the original design, irrespective of the fonts installed.

No it’s definitely a 30 degrees used on both… but so if this was your project, what would you have set the depths at for the pocket and plug?

Your settings are not the issue. Your issue is that it is too loose, while your settings should make it too tight and the pictures look like a 30 degree bit was used.

Only thing left would be error in carbide create or error in your tool database. Mind taking a picture of the settings for your 30 degree tool in carbide create and linking to what tool you bought? Are you using mac or PC? Maybe there is a bug in the mac version (seems like a long shot)

I am using a PC, but I am at work now so I don’t have access to my tool database. But I am using a Amana Tool 45771-K Solid carbide spektra extreme 30 degree coated engraving tip… In my create file is shows as #10 bit, maybe that is incorrect… I have the create file uploaded in previous comments I don’t know if it is unable to open for you. 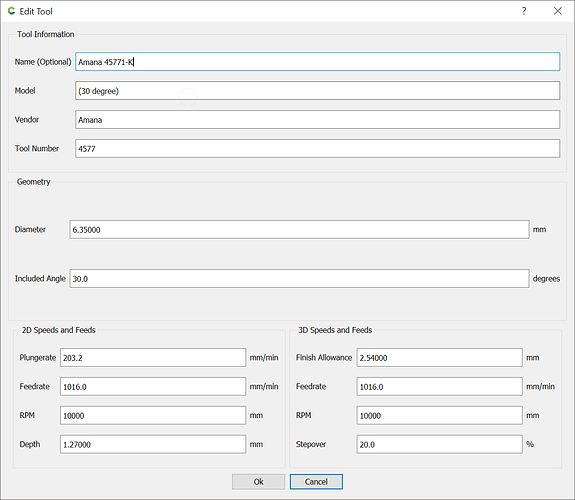