Has anyone milled “softer” plastics like UHMW polyethylene, and the like? With a 1/8" end mill, it’s cutting like butter. But I’m barely getting any chips - the plastic is so soft that the waste is clumping together in long strands that peel back away from the workpiece. I was just letting it run, but then a 6" long piece of the swarf wrapped around the spindle, and almost crashed me.

I’m having to babysit the machine, and pause every 5 passes or so to pull the strands away from the work. Should I be using a different setting (faster, slower, shallower, etc.) to avoid this, or is it just a “feature” of this material.

For the record, wood and foam have been producing chips as I’d expect, and the cutter has less than an hour on it, so I don’t think there are problems there.

How fast are you feeding and at what RPM ?

What cutter? How many flutes?

The response to @Julien’s question will probably lead to the answer that you want to feed faster, much faster.

Feed and speed were the “cookbook” for HDPE in MeshCAM. 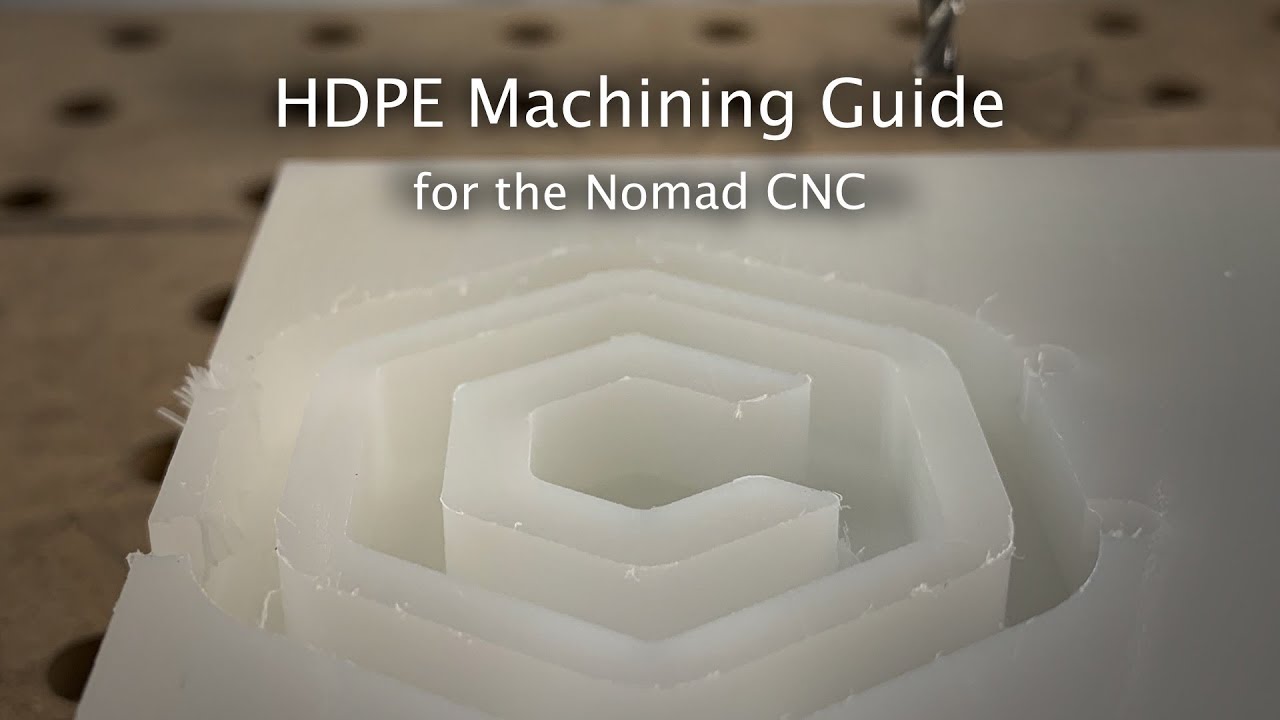 Thanks, that’s very helpful. I’ve never met Winston, but I think I already owe him a beer by now. I’ve probably watched 5 hours of his videos, but I missed this one.

If I can assume the materials are close enough, then Winston is suggesting I feed almost twice as fast, and cut 3x deeper. Does that sound reasonable? I’m not in a hurry, and would rather be cautious than break a cutter. But pausing every 2 passes to pull off the “tails” of material that bunch up is making me babysit this pretty closely.

Thanks again - everyone has been really helpful.

I recently drilled some holes in HDPE on my drill press. The long strands are still on the floor. I run my drill press at almost the lowest speed all the time. That slow speed made the long continuous strands. For my drill press that caused no problems but I also experienced some of the strands wrapping around the drill bit and were quite hard to get off.

I have cut UHMW before and it does seem to pretty much act like HDPE (to me). I have run those higher speeds and feeds before and had no problem with them. HDPE is so soft I have accidentally driven into it at 8mm depth and had it slowly stall out the Nomad Pro spindle so I think you would have to work pretty hard to snap the end mill.

I cut Delrin/acetal with my Nomad using 1/8" bits and smaller quite often. It’s similar to HDPE.

I’ve experimented with different cut depths up to 3mm, which worked just fine

I usually have nice chips on Acetal with 1.5 to 2mm DOC and just 600mm feed. So it’s fine to cut deeper. The speed you can adjust in Carbide Motion when the job is running if you want to get a feel for how fast you can go.

The first step to go based on what you shared is to increase your feed rate to Winston’s speed and see how that looks. It should be better and then you can increase the depth to your desired level.

Another option is to do an adaptive milling process instead as it takes many “swipes” at a material instead of pocketing that just takes it head on. The small swipes will reduce the length of build up that will happen. You could also try cutting conventional instead of climb cutting and see if that helps. I know @wmoy ran into these problems but I don’t remember all his solutions.

I just tried this, and it’s helping a bit. I upped the speed to 150% while running, and it’s not bogging at all. So it does seem the material is soft enough that I can push harder.

Still getting the stringing instead of chips, but with a faster cut rate, I’m now babysitting for 40 mins instead of 2 hours. Progress…

I was thinking of forcing conventional vs. climb to test. It seems to cut better during some passes, so I’ll watch to see if it’s one or the other that’s more repeatable.

Good to hear! Your stringing might change to chips with a different fluting arrangement?

I’m running 2 flutes now. Would you suggest going up or down? Or high helical rate? The one I’m running is a pretty slow twist.

O (as in the letter) flutes look perfect, though I’ve never used them myself.

I also found that everything else remaining the same, TiN coated end mills seem sharper and less sticky. They make better chips when cutting through plexiglas (an other plastic that tends to make strands melting around the spindle and mill).

I’m now babysitting for 40 mins instead of 2 hours. Progress…

Christopher your statement concerns me. You should babysit your machime all the time. You should always be within ear shot and no more than a few feet away. Whem things go wrong it goes bad quickly. You could start a fire or damage your machine beyond repair.

Please baby sit your machine closely to avoid unintended consequences. The machines are great but not fool proof.

No, I plan to sit next to it except when refilling my coffee. In this case, I’m having to literally stare at the machine for the entire run so I can stop every 2-5 passes and manually pull strings of material out of the path of the cutter. If I don’t, they will wrap around the spindle, and making screaming noises that machines shouldn’t make.

I’m not going to run the machine and go to sleep. But I need to get settings to the point where I can at least check my email while it’s running. Otherwise, it would be more efficient for me to manually cut things out of plastic.

Realizing this isn’t the machine’s fault, but I’ve tried every setting I can think of, and no improvement. So I’m chalking it up to this oddball conductive HDPE, and never buying it again.

Really, in soft plastics just feed (much) faster than you feel comfortable or CC tells you too, use a single-flute cutter if you can, initially dial back depth per pass if you need to to reduce risks of breaking the tool (you won’t), and I would be surprised if you can’t get clean chips, or at the very least small melty blobs rather than strings.

Another thing I forgot to mention earlier is, how fast are you plunging ? I have had cases when cutting HDPE when my feeds and speeds were fine during the cut, producing nice chips, but I was being too conservative on plunge rate, and then each time the endmill entered the stock, it would produce a melty string of plastic that would quickly wrap itself around the cutter and spin, accumulating over successive plunge moves, until it became an issue. I now use a plunge rate that is at least 50% of the feed rate when cutting soft plastics, and never had another issue.

Anyway it’s perfectly understandable if you would rather avoid this material and move on, just mentioning this in case you ever end up in a similar situation again.