Hello everyone. I’m loving this community and the forums. Hoping to get pointed in the right direction.

Project calls for patterns as skinny as .80mm and up and only .50mm deep.
Using Carbide Create Pro to create file from scratch.
Measuring 0 from the top of stock.

My first 10-15 toolpaths were actually pretty smooth and I was happy with the finished product. But now I’m seeing extremely uneven cuts. You can see that they are not even close to even now and if you run your fingernail across the cut, its just awful. It looks like the tiniest step pyramid you’ve ever seen. This happens whether I use the initial end mill or a new end mill and with varying combinations of speeds and feeds. In the attached screenshot you can see the toolpath. That’s exactly what the finished cut looks like but in 3d. (each block on the grid is 1mm) 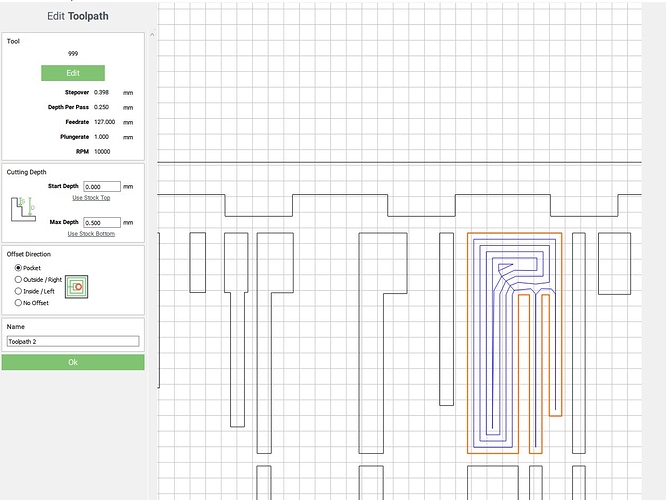 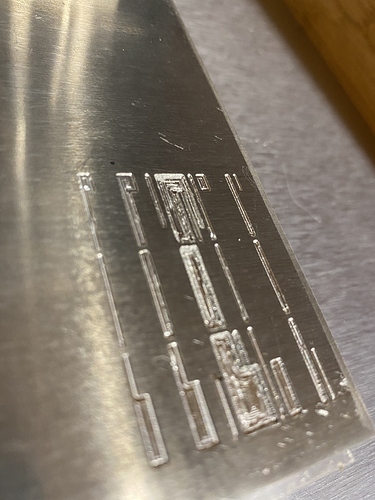 What could have changed since the beginning or what could I now be doing wrong to cause this “step pyramid” effect in all of my cuts?

Please examine your endmill, if possible with a loupe — is it still in good shape?

Also, note that one should check that an endmill is secure in its collet — I worry about metal galling and so forth so try to always remove and reinstall before a cut, even when the same tool is used for a cut.

Thank you for the fast response. 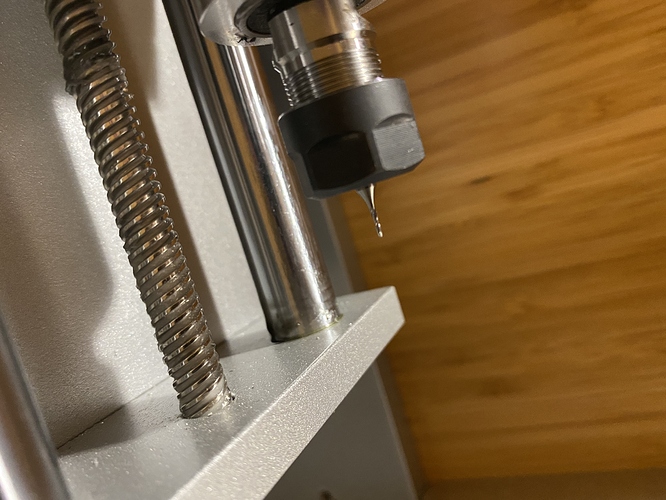 I do not have a loupe but I did examine with a magnifying glass and it looked ok to me. (I’m no pro though) With that in mind, I loaded up a brand new end mill and got the same results. End mill is carbide, no coating. And I do have it all the way up in the collet as far as it can go and still cut the required .50mm. It actually sticks out about 1/2 - 3/4 inch.

The color of the tip looks suspiciously like melted aluminium to me, is it the case ? 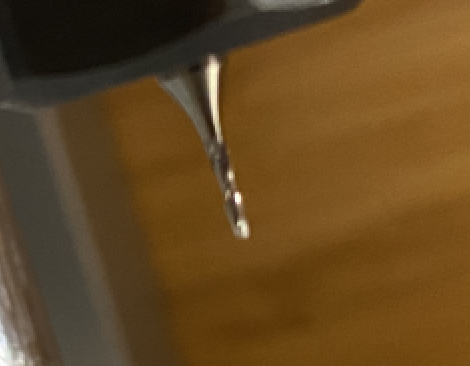 CC recommended feedrate for all larger endmills in aluminium is 10 to 12ipm, I would think that it’s not necessary to slow down to 5ipm for a 1/32th, but then again I never used one so small in aluminium.

Are you getting clean little chips during that cut ?

@PhilG - Good catch. Sometimes it hard to wrap my mind around .25mm being too much of anything. Ha. I will lower the stepdown and try again after work today. Thank you for the advise!

@Julien - You’re correct, It is a 2-flute. The feed does seem to be slow. The chips are sometimes clean and sometimes they become a long curly strand. I do keep them vacuumed out as it’s cutting though. I probably do not need to go that slow, I think that is must my mind rationalizing that slower is better when that’s not the case. I need to trust the recommended settings. And you’re right about the melted aluminum on the tip of the end mill. It’s hard to see with rookie eyes but that could also be happening. I will make some changes tonight after work and re-test. Thank you for the help!

yeah CNC is counter-intuitive sometimes, because to play it safe one often needs to cut shallower but faster, which is scary, especially when using such a small endmill. If you do have melted aluminium on your endmill, you can soak it in lye to remove it easily

it hard to wrap my mind around .25mm being too much of anything

The tool is only 0.8mm diameter. Small tools take some getting used to.

Thank you everyone for the advise.
@Julien @PhilG - I increased my Feed to 10 IPM, and reduced my Depth Per Pass to .10mm. These two adjustments made a huge difference in the quality of cut and wear on my end mill. Thank you.

@WillAdams - I believe my Feed was too slow and may have caused a small amount of melting. I used a new end mill with the adjusted Feed and Depth Per Pass and it worked pretty good.

Thank you again everyone for your advise. I’m still learning and this provided a sizable jolt to my confidence and skill. I hope to pass it forward some day.