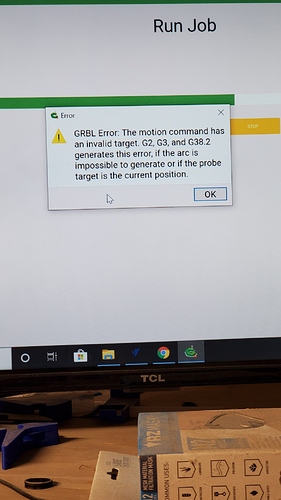 Anyone have an idea why I got this error. I was 4 hrs into the carve and it stopped

Check your post processor. The g2 and g3 commands make an arc cut. So recheck your original and check what the object is doing.

Using Fusion 360 with the Nomad and Shapeoko

If some other CAD/CAM tool let us know the specifics, incl. the post-processor as @gdon_2003 noted and we’ll do our best to work through this with you.

Which version of Vcarve Pro?

Please send the .crv file and generated G-Code file in to us at support@carbide3d.com — might want to open an issue on the Grbl GitHub.

Can you share your V-carve file and/or the resulting gcode?

Wanted to update this thread:
Kris shared his files with me and it turned out that V-Carve was occasionally making some insanely small arcs that, due to the dreaded rounding issues, were triggering an error in grbl.

@whitt3 had an arc or two that fit that second condition…barely. I made myself a Google Sheet to keep the calculations straight.
Anyway, it was fixed by simply increasing the decimal precision in the Tool Change Post Processors.

I am now receiving this error with Vcarve Pro 10.5. I can not figure out how or where to install the PP. Thank you!

To add a custom PP, go to File => Open Application Data Folder, it will bring you to the right directory on disk, just create a subdirectory called “My_PostP” there, and place the custom PP file you want to use in there. Close VCarve, restart it, and in the toolpath generation PP selection dropdown list you should now only see the PP (or PPs) you have in your My_PostP folder

Thank you so much!! Between that and Texas heat it was a long day! Thank you!

I saved the files from above and this is what I’m getting now. 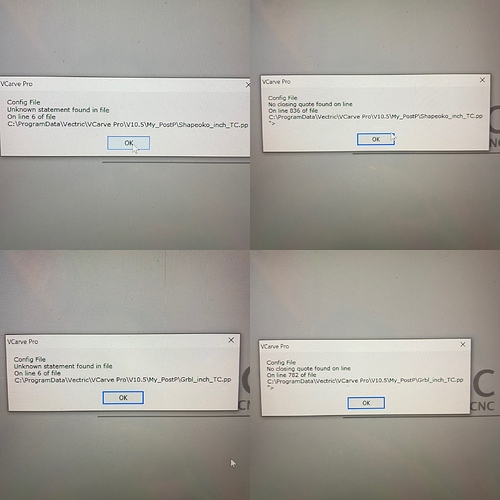 @jedimomma112 Check here and the few posts leading up to it.

I am having the same issues with my designs, I am a complete idiot when it comes to G code, what do i need to do.

(not answering for Neil, but use the metric version of the post-processor : Shapeoko_mm_TC.pp and you should be ok I think)

Julien, Thank you, I can try that, would I have to change all of my files to metric as well then? I hope that is not too stupid of a question.

There is no such thing as a stupid question. No, you just have to select the “mm” post-processor in the list when generating toolpaths, the rest of the project can stay as is.

Thank you very much, that did the trick!! I am so excited to be able to run my machine again!