Using a CNC AS a router table

I was planning my design for a workbench for my S4 which I got last year and was going to incorporate a router table right next to it. Then I had a crazy thought. An S4 is really just an inverted router table. With the jogging capability, you have very fine control over the Z even more so than those $500 router tables.

The basic idea I have is to build a fence that mounts into the t-slot. With the S4 on and the stepper motors powered on, the spindle shouldn’t move. Could even use another t-slot as a channel for a miter gauge. I thought I could put in stile and rail bits to rout shaker doors frames.

If I have the time I’ll try to sketch out my design.

Anyways, does anyone know why this would be a bad idea?

This is not a supported mode of operation — on an SO4 you’re risking the Delrin V wheels and potentially damaging the aluminum V rails.

It’s a robot which is supposed to move the tool under software control — please use it thus.

If you need a router table, use the CNC to make one.

I realize it isn’t a supported mode.

I guess I didn’t think the pressure applied by my pushing a workpiece against the spindle is greater than the S4 pushing the spindle against the workpiece (Having painfully pinned my hand accidentally by the gantry, I know those stepper motors can apply a lot of force).
I guess I was thinking there are a lot of safety considerations as well since putting anywhere near a spinning spindle is probably a bad idea.

The main motivation is that the expensive router tables have fine control over the router’s Z which the S4 has even better control.

Please don’t! Use the tools as intended and make or buy a router table. I made an insert for my workbench to mount my trim router and use as a router table. 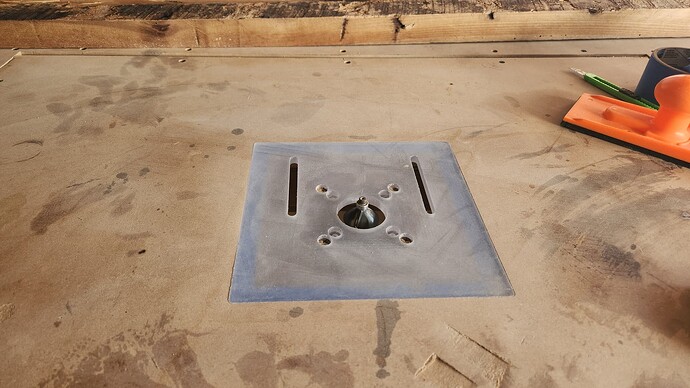 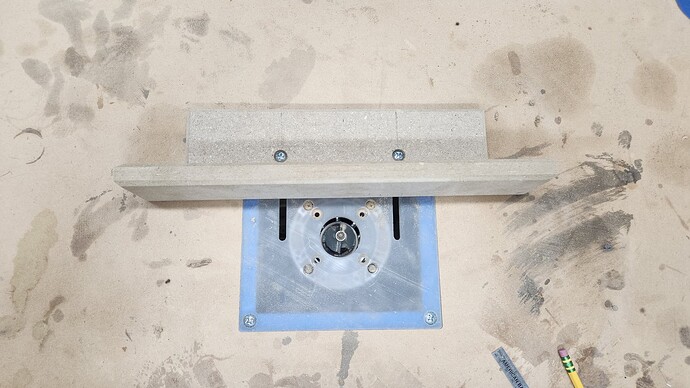 @DiscoJon First of all, don’t take this as being argumentative, but is there a reason why you don’t think it’s a good idea? (just asking for thoughts here)

I do have a simple router table for my trim router that actually looks a lot like yours, but it has short comings. I was looking to avoid purchasing a router lift to give me the z-axis control.

As for not use as intended, seems that the Shapeoko design invites hacking it for new applications (maybe not as far out as my idea), that’s what’s cool about it.

My biggest concern is whether this is a dangerous idea.

I don’t take it as argumentative at all. My profession is in Occupational Safety and Health as a Risk Control Consultant. For the last 18 years I’ve counseled companies on regulatory safety requirements and helped them navigate everything from minor injuries to fatalities. Lots of these injuries come from using tools outside their intended scope of operation. There is a reason industrial CNC machines have interlocks preventing the operator from being near the point of operation when the tool is in use. That reason is operator safety. Sure, you can use the Shapeoko as a makeshift router table…if you don’t value your fingers / hands. I can guarantee you that eventually the machine will grab the work piece and launch it across the room, hopefully not entangling you in the process. You will never get approval or support from C3D in this endeavor due to insurance concerns. Worst case, someone gets hurt using the machine in an unintended fashion, sues and wins due to a shortcoming in the instructions. Maintain your tools in good condition, use them as the manufacturer I tended.

And yes, it is a dangerous idea.

I agree with what William and Cody have said about safety

Here is a thought that might get to what Haw-minn was trying to accomplish.

Point taken about the danger, but just to play devil’s advocate and take this outside the real world to the realm of an academic exercise, isn’t your argument about the workpiece the same with a conventional router table? A properly mounted router on a table is just as likely to catch a workpiece and throw it. All that said, I’ve heard that a router/shaper is the most dangerous piece of equipment in a wood shop.

Interesting idea @clocker, but my thought was using things like a stile and rail bit which by necessity have bearings. One thing I did learn as a definite no-no is using bearing bits on a CNC. The reason being if not perfectly aligned, it can but stress between the workpiece and the machine. Plus the hope was to run it on workpieces longer than my S4.

As I said in a previous reply, based on the feedback. This is just an academic exercise.

I am respectfully terrified of two tools in my shop. My router table and my jointer.

Being my own devil’s advocate, I can see the key danger is that the spindle is in a confined area unlike a router table. So if you try to pull away from the workpiece due to perceived danger on a table you are clear, but on the CNC you might hit the gantry (when in a self preservation mode you don’t think about avoiding things). The other potential danger is on loss of power, the CNC will no longer be rigid.

As for you last comment, maybe it is healthy fear of power tools. The only time I had a tools related ER visit was grabbing a very sharp knife by the wrong end while trying to catch it when I dropped it.

If using the Shapeoko for a similar application you now have the router/spindle on the same side as your hands/push blocks so if you get pulled towards the endmill you hands are really in the danger zone… Agree with the other comments I wouldn’t do it.

Can you imagine the look on your face if the power goes out, releasing the stepper motors, allowing the router to jump while it spins down? Keep that camera rolling.

As an engineer you should be familiar with Failure Modes and States. Robotics / CNC machines should be designed to fail in a safe state. As mentioned, if something fails on the z-axis, the machine may or may not fail into a safe state (when used as a router table). An unpowered z-axis with the spindle still under power is an unknown. It could drop or climb based on the type of cut it is in. the chip load could go from a reasonable amount, to something dangerous in an instant. A router table on the other hand is locked to a specific height and will not move barring catastrophic failure or improper use by the operator.

Hopefully everyone has talked you down off the ledge of using the CNC as a router table. However if you do try remember as you said the router is in inverted router table. Normally on a table mounted router you feed from right to left. On an inverted router you would need to feed from left to right because of the router rotation. You always feed into the spinning bit. There are rare cases called climb cutting but those cuts go into the rotation and can quickly become out of control. Another reason is the physics of routing with the router above the table. You need to use a push stick to keep material tight up against the fence and moving forward. With the router above it will be hard to keep even pressure on a board and get a straight even cut.

Check out this mad scientist on youtube. He is very entertaining and informative. He is by no means the definitive maker but he is pretty smart and builds a lot of his own machinery. 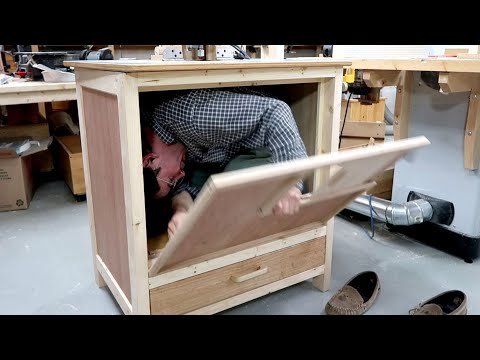 It’s not the z-axis that is the concern. Since the z-axis is on a screw drive, powered or unpowered it’s not going to budge. The free axis of rotation on the z is perpendicular to the motion so even in an unpowered state it won’t rise or drop. (It must me this way otherwise, the spindle will plunge every time you turn the machine off. The x-y however on the S4 has free motion in the unpowered state in not perpendicular but parallel to the motion of the stepper motor that’s why you can move it when it is unpowered. It’s still not a safe mode failure. Movement of the spindle in the x or y direction during power down could be hazardous, especially if it was engaged in the workpiece. The kick could send the spindle flying while still spinning down.

Do me a favor. Go out to your machine, turn it off, and push down on the x-axis. I’ll wait.