HI. I was looking for feedback on a vacuum related project that I have undertaken to see if someone had done something similar or had suggestions. I have a Suck It dust boot on order and was looking for a way to suspend the power cable to the router and obviously the vacuum hose. I looked at the solution that XCarve sells which is basically a bent piece of pipe with a swivel. So first, I thought why not replicate the arm out of ABS plumbing pipe. Then I thought why not make the pipe the support and also use its functionality as a vacuum pipe. I decided to go with 2". I made a couple of brackets out of a 1/2" HDPE cutting board (see below) and over sized the center hole so the pipe could turn freely and hopefully not bind. I used the HDPE because I thought it may turn easier and would not be susceptible to swelling like wood may be.

Between the brackets are two couplers and a short piece of pipe that act like a bushing for lack of a better word and ride on the bottom of the brackets as the arm turns. The vacuum hose at the top and bottom connect with two 2" rubber pipe couplers. The other picture below shows the whole assembly mocked up and clamped to the bench. The idea would be to locate the whole thing in the rear right or home position.

Any way, that’s it. I would love to hear ideas on how to make it better. 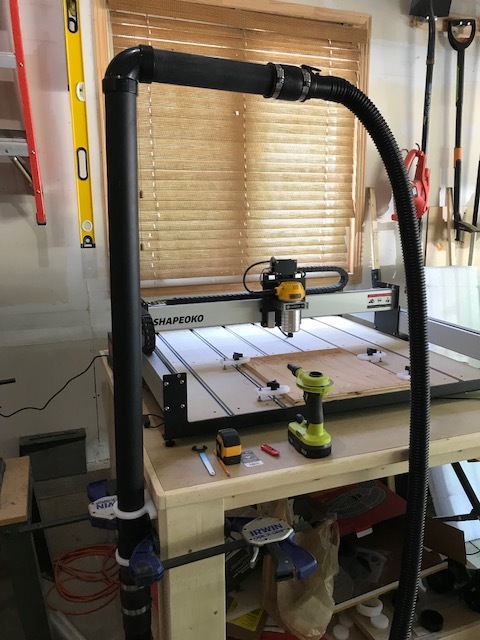 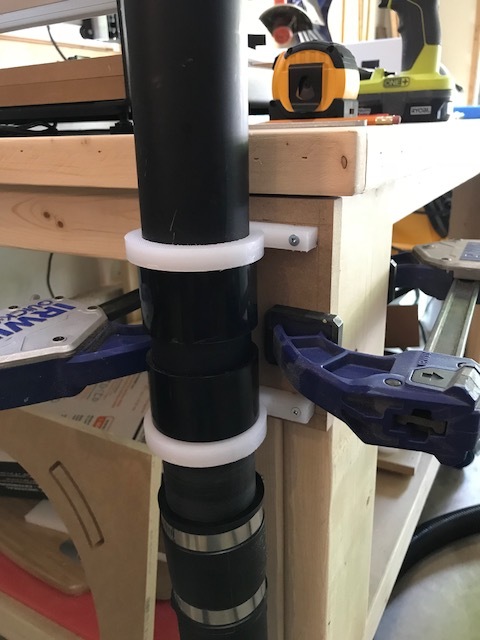 This is my setup… Easy and works extremely well. 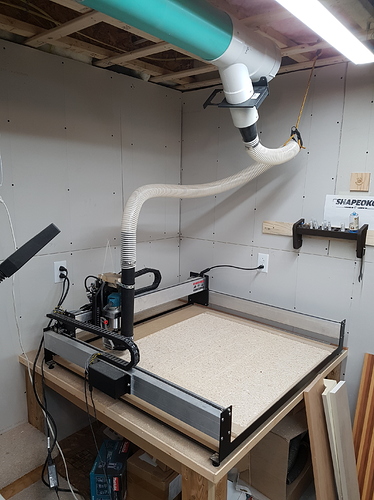 One problem I encountered with the dust boot was the ridges of the hose getting pressed up against the router mount. Unless the gantry was in the back half of the machine (pulling the hose away from the mount), the mount would hook in to the hose and cause slipping in the Z. I fixed that by using a solid 2.5" wand piece and a stand off block to hold it out from the mount. The only thing I’ve considered changing in my set up is to run 4" hose to the top of the wand. Or possibly building a dust boot that could handle a 4" hose. Probably overkill though, I get almost no dust left behind with the current system.

Hi, thank you for the response. I like your overhead system and may consider something like that for my setup. I think I will try the current design and will let you know how it goes.

Here’s a really long forum post, but I’ve done what you’re doing. I got rid of the 90 degree bends where I could and no swivel needed. I’ve yet to have it bind up. I located my “vac boom” towards the back of my machine. I run my router cable out the opposite side though in a separate drag chain with SuperPID sensor cable (different forum post somewhere around here):

That looks good Jude, but no worky with an XXL because of the straps. Although I had found some moulding material at HD to make suitable shims I didn’t really feel like going to HD today as I have plenty of other stuff to do. Then I realized I own a table saw and I’ve got a bunch of MDF laying around, so I grabbed a piece of 3/4" thick and cut my own shims. I decided to just make a bunch of single pieces, then strategically place them under the end plates, see pictures: [image] [image] And…

Funny, just when I thought I had it nailed, lol. Your setup looks great and a heck of a lot less complex than mine. Thank you for responding, I think I have some changes to incorporate.

I really like this setup. I just got a new two-stage dc and I’m trying to plan out my setup. Are you running six inch all the way back to your collector?

6" mains with 4" branches. I have the DC in the corner, with two 6" mains that run along the walls, plus a third that runs diagonally to the workbench and table saw. In order to streamline the flow, I mounted the blower to the ceiling so the mains would all run straight in.