Cheers Griff! I waffled endlessly about buying it, wish I had when I first got the machine. Really capable software.

I spent most of today re-writing the shapeoko post-processor for vcarve. Adding tool change support and some better code commenting mainly. I’ll get it tested out and hopefully post it tomorrow night.

Okay @Adam_Xett, need help with the above picture. I did the standard Vcarve recommendation of .2" depth for the pocket, and .1" / .1" for the male side of the inlay. Unfortunately, they are too close in size to fit properly. Can I re-run the V-carve toolpath for the female portion with a depth of .25" or .3" and salvage this without wasting the Male portions I have milled? I don’t want to try to cut the male portions smaller, as I will lose detail I think. Suggestions?

@EvanDay, can’t see a picture, but based on what you said… maybe.

Don’t adjust the female flat depth, this will just make it deeper, not affect the fit of the sides. I believe that if you re-run your female pass using an increased start depth (say .005 to start with) and the same .2 flat depth, it should widen out the pocket.

God speed! Let me know if you rescue it…

Thanks for the quick reply. May try that tonight. The picture I was referring to is earlier in this thread.

Looking forward to trying your post processor. Managed a few cuts last evening following my normal routine and got bitten immediately when I hit Run and the cutter dove right in before I could start the router! No harm though it was scrap wood and a 1/4” bit, just had to re-zero z.
I do like the fact that the vCarve post doesn’t return to home on an abort. I broke my SuckIt, twice, crashing in to clamps on the way back home. My preference on an abort is to retract z 100% and stop.
I like the software, much simpler and better for engraving etc then F360. Double sided looks simpler too, can’t wait to try it.
Thanks again Adam.

@Adam_Xett, Haven’t tried the new post processor yet, however one question: I prefer to saw apart the two pieces after glueing. Will I have enough space for this using your values of .15" / .145 / .025? I use a really thin bladed hand saw that I normally use for cutting dovetails. On a happy note, after many long hours at work, I was finally able to get back to my inlay coaster project and I was able to save the ones I had messed up on. They are glueing up this evening so I think they will turn out well using the standard values of .2 / .1 / .1

@EvanDay - Nope, my values will not allow room for a saw blade to pass between, but you don’t have to split them, you can always just saw through the inlay backer material. Adjusting the inlay’s Flat Depth will give you the gap you’re looking for to pass the blade. Glad you got your coasters squared!

I use VCarve and love it. For this type of inlay I also discovered the F-Engrave. See it here: https://www.youtube.com/watch?v=8ty7ITWadv8
VCarve will handle it too but no experience as yet.

Considering the price (free), F-Engrave is really great. I worked with it a bit and got decent results, again, knowing the price. That being said, I wish I’d bought vCarve out of the gate, such a great application (especially for vCarve’d inlays)

Long follow up since I can’t edit the OP:

The values above work best with a 60 degree vBit that’s got AT LEAST 3/8" cutting surface. The Whiteside 1550 is what I used in my testing.

Do you still recommend this post processor or is there a newer version?

The non-carbidemotion one should still be fine (I used it yesterday), if you need to send with carbide motion I updated that one recently here:
https://community.carbide3d.com/t/vcarve-updated-post-processor

Thanks for the response, I only got started with my Shapeoko and CNC in general about a month ago. I’ve cut a few things but just invested in Vectric carve desktop and was surprised, or at least dismayed, that there was no tool change prompts for my bitrunner. That’s why I asked if this was the newest version of your modified post processor since I apparently revived a 4 year old post. Any suggestions are welcome!

So is Carbide motion good for Vcarve desktop? I’ve been debating purchasing it since the start/flat depths make so much more sense for inlays compared to carbide create.

This video is great at explaining how to correct the bit from plummeting the entire start depth for your plug. It pretty much tells you to break it down into multiple jobs to avoid going so deep in one shot. 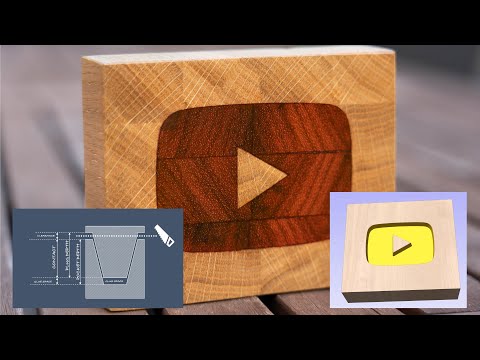 Design wise, it’s amazing. I exported my G code and ran the job for each tool independently, I was just disappointed by the fact that it doesn’t support tool changes natively. I’ll have to rewatch that video though because I am having an issue with the depth of my V bits. My test inlays so far have these ugly gouges in them.

For tool changes, if I understand correctly, you simply need to choose a post processor which supports/enables them. See:

How to set up the BitSetter with Vectric Products How To

Either edit the post-processor you are using, or get one which supports tool changes: (note that Vectric support has been sharing that file to customers who ask after this) See: Vcarve Pro and Post Processor for further details.

Just measuring from a different reference.

So then why is it whenever my start depth is larger than my max depth for Create, it shows that nothing is being cut in my simulation? Where as in Vcarve the start depth needs to be larger.