Hello,
I’m working with VCarve Pro 11 and am experiencing a strange jog on one piece that then causes the rest of the cuts to be off by the jog amount. Here are the details:

The piece I’m working with is 24" x 31.75". I make multiple cuts that work just fine, then come to a piece on the far right of the work. The cutter seems to be going fine, then does this weird kind of jog, and the rest of the cut from that point forward is off by the width of the jog.

I’ve re-drawn the piece, thinking it may be a vector issue, but still have the same error. No issue with vector validator, and the node edit on it looks very clean. I have included a picture of the issue, and would really appreciate any help in resolving it. The object I am trying to cut is all straight lines, so I have no idea where the zig zag that I have in the red rectangle is coming from? 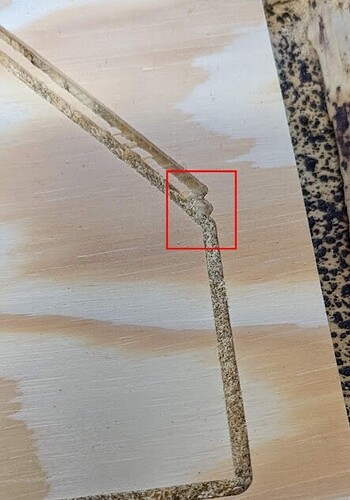 Are you cutting a slot just as narrow as the endmill?

then come to a piece on the far right of the work.

Are you sure you did not reach the mechanical travel limit? That would easily explain losing steps (and therefore the offset for the rest of the job)
31.75" is close enough to the machinable area limit that this could easily happen

Does not seem to have met mechanical travel limit, as it made one cut at the right spot, then a weird jog after. When I initialize the machine, the spindle travels inches farther than the edge of my work piece as well.

Not quite sure what you mean. I’m not cutting slots. I am using the profile toolpath to cut around the outside of the pieces I am making.

I also noticed that in VCarve Pro 11, there are different post processors than there were in VCarve Desktop 10. In 10, the post processor was just Shapeoko (inch) (.gcode). In 11, I have Carbide Motion ATC (inches) (.nc) Looks like the set up for machine and post processor are really different in 11. Could that be it?

Is the toolpath as narrow as, or wider than the endmill?

If it is as narrow as the endmill, it’s a slotting cut.

Could that be it?

I very much doubt it would be the post-processor, but one easy way to check is to use a gcode preview tool to check if the generated gcode has this weird part in it. I like to use ncviewer.com

If the gcode previews correctly, then it is something mechanical. I can’t tell from your picture what the orientation is ? (which axis is X and which is Y). It’s probably either lost steps due to too aggressive cutting (i.e. what Will is referring too, slotting too deep) or a pulley slipping on the motor shaft (and then double check the setscrews on the axis that slips)