What would carbide create pro do to this acrylic sign

Should have said it comes out well in carbide create, has some lines using the MC Etcher,so was wondering if the Pro would improve the quality?

I don’t think PRO would give you anything here. You have the Engrave path in the free version, right?
That would allow you to lace/zig-zag/raster cut rather than pocket, which might improve the finish & appearance. I would try an engrave path, followed by a contour no offset to sweeten up the edges.

I too don’t recall if the Engrave toolpath option is available in the free version of CC. If it isn’t, this screen shot will show will show some of the options that may be useful to you. 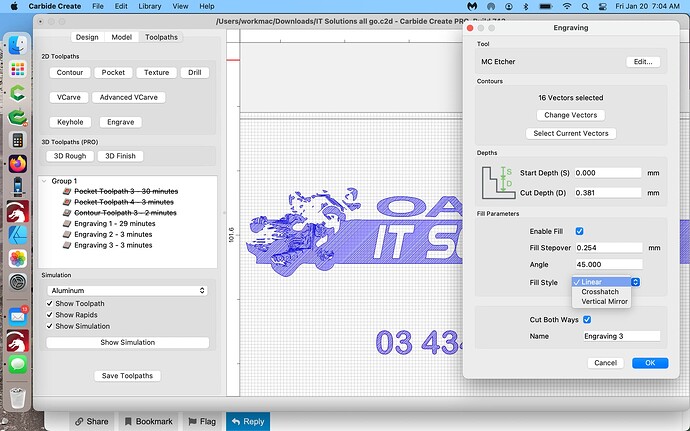 The Engrave toolpath is a Pro feature.

The alternative to it in the Free version is Texture, see:

or something. Let’s draw an image to use an etching tool on — first source a suitable material: Then begin drawing: [image] [image]

I couldn’t remember either. This on the free CC page is misleading…

Which must be contour path.?? And texture paths are not described.

You can engrave w/ various toolpaths, but there is a specific Engrave toolpath in Pro.

Thanks everyone, more options with Pro from what I take,again thanks for the help