Why did this happen..?

I’m cutting out a wierd shape inside a box, for which the stock is 1.625" thick.

This is cleary too much for a #201 or #251 to deal with so, after I cut out the hole, I switched to a longer bit to cut the workpiece out of the stock.

Because the original toolpath was set up for the #201, which I realised was too short, I used the Change Tool option to do just that using a bit with 62mm flues, and the BitSetter did it’s thing bringing the tool back to front and centre waiting for the Go! I hadn’t changed anything regarding the X, Y and X axies, so didn’t think it would be necessary to use the BitZero.

Except the bit didn’t rise up enough and ploughed straight into the stock - fortunately I was quick enough to stop everything before damaging the workpiece.

As the stock hadn’t moved and the BitSetter did it;s magic, why did this happen, please?

Most software has a setting for “safe” height of the bit. I’m not using CC, so I don’t know where it is.

Post the .c2d file, generated G-Code, step-by-step notes on how you are securing your stock and setting zero and managing tool changes, and a photo showing how the cut turned out and we will do our best to work this out with you.

I’ve got the Z-Plus on an XXL.

My bet is that the head is hitting the top stroke and loosing steps. Remember this is an open loop machine, so it doesn’t know this is happening…and the results sound exactly like you described…

Easy to do at the top OR bottom of the Z+. If this is true, listen to the noise that it makes…recognize it and hit that E-Stop and fix the problem before continuing (next time).

.c2d and both .nc files attached.

The *-edited.nc file is just the second part of the cut for the through hole and cutting out the project from the stock, after I’d decided to change the tool.

The stock was secured using two of these, and was zeroed to X, Y and Z axes using the BitZero v2.

Sorry, I didn’t take a photo of the cut, but essentially the bit moved from front/centre towards the through-hole, but didn’t go up enough to miss the stock, cutting about 13/16" from the bottom of the stock.

When I paused the cut, the bit was stuck in the stock (from the front edge), so I had to turn it all off, physically move the router away from the stock, realigned the stock, replaced the long tool with the BitZero probe, reconnected the Shapeoko and intialised it, BitSetter did it’s thing, then I changed to the #201 and cut is as normal - except I only allowed it to cut part way through and cut the rest with a multi-function saw (like this one).

Just looking at @RichCournoyer post, it didn’t seem to be doing anything wrong or make any unexpected noises, but maybe with the stock and the bit, it was just too long? These are it’s dimensions (it’s a bit late to measure how far the tool extends from the collet, so I’ll do that in the morning)…

Your safety/retract height is only 0.050", so retracting and losing steps at the top doesn’t seem to be the problem.

I suspect the issue is attempting to cut a 1.625" deep slot — does your endmill have cutting flutes that long?

So, I’ve been out and did some measuring… 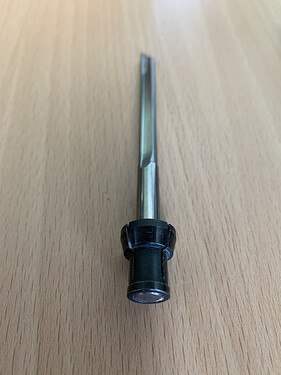 However, for the future, would it be a problem if I inserted the tool deeper, like this: 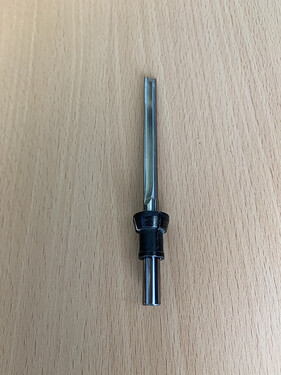 In answer to your question though, @WillAdams, the flutes are 2.44" long, which are plenty long enough, but perhaps 2" flutes would have been better, in hindsight, giving me an extra 1/2" gap to play with.

I choke up on endmills thus from time-to-time — I don’t think it’s best practice (better to use the right length), but decreasing stickout does help w/ rigidity, so arguably fine.

I’ll yield on the specific pros/cons to someone w/ more experience on this — @wmoy ?