I got one for my Mac that uses bluetooth. It connects ok but doesn’t work with Carbide Motion. Strange, no?. Any ideas.

I just use an old wireless keyboard. Works great!

I bought one of these as well, best $18 I’ve spent on the hobby. It’s great being able to walk around all 4 sides of the machine, set zeros all with a tiny little wireless 10 key in one hand without looking at the PC. If you have an XXL, or probably any of the SO3’s this is a must have item. I don’t own a Nomad, but would think the small size might make this less important. I run mine on Win10, I don’t think there was anything to configure other than plugging in the USB Bluetooth dongle and installing batteries in the keypad, which I think it came with;-). Cool stuff!

I ordered this today… thanks for re-posting Bruno.

Anyone has this working on OSX in a Mac?.

Noticed a few days ago that my numeric 10 key is no longer working correctly after the CM 4.0/Grbl update. X/Y work like they should, but I can no longer set increments. Z doesn’t work at all. I put in a support ticket to the Beta team, but haven’t heard anything back yet (I know they’re probably super swamped). Figured I’d ask in this thread if anyone had noticed same issue, or if maybe it’s just me doing something wrong? Since my actual mouse and screen are not next to where I set my zeros on the machine this issue is somewhat of a show stopper for my current workflow. Anyone else notice this?

I was wondering if this might be an issue with the GRBL 1.1 update? Just looking at the latest CM UI suggested big change, and I had wondered about 10-key compatibility… maybe others who have upgraded can confirm this?

I just find it odd that X/Y movements still work fine, but Z doesn’t work anymore. I can see where the increment control via Num Lock + 1-5 would be changed since we lost slow jogging, but not being able to set Z without using a mouse is a real killer for me when setting zeros unless I grow really long arms all of the sudden, this is where the keyboard shortcuts really shine.

+20yrs in IT, and I can’t believe I didn’t already think of this ridiculously simple life hack… My wife’s gonna hate me for ordering yet more stuff for “my stupid hobbies”, but I’m just gonna keep blaming you guys…

What a great idea. I have bought one. Now I can put my laptop on the wall opposite.

My wife’s gonna hate me for ordering yet more stuff for “my stupid hobbies”, but I’m just gonna keep blaming you guys…

Don’t blame any stupid hobbies on me, my wife already has filled my “Hobby Blame Bank” to the top! I have 2 3D printers, the SO3XXL, only one motorcycle (down from 3 last year), tons of RC airplanes and RC helicopters, a bunch of guitars, drums, recording “stuff” and as they said on Fast Times at Ridgemont High, I have a killer set of tools!!! Besides, if you read my previous post my 10key wireless isn’t working correctly after the last big software update, so you may have been better off buying a new end mill or two, haha!!! 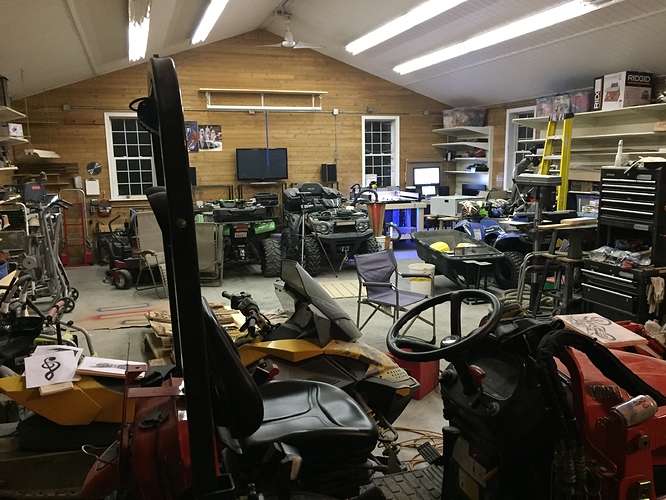 My 'shop. My Shapeoko is in the far right corner

Ok, you win, much more cool “Stupid Hobby Stuff” than me. I would love to have that much space, I just bought a new house which I haven’t moved into yet, but it only has a standard 2 car garage. My wife won’t allow me to park my motorcycle in the formal dining room, which I totally don’t understand because it would leave more room in the garage for my stupid hobby stuff, but some wives just don’t understand stupid hobby logic I guess

She has agreed that I can build a shed in the backyard, but it will be for yard tools only, but that will leave some extra room in the garage I s’pose, haha!

You need me to design you a vertical storage system for your ATV’s! You could probably get three of them vertically along the centerline of the room. That would make room for a lot more CNC equipment

You are already in the web… resistance is futile. Just place your order for the ATV stacking elevator and be done with it!

Just curious if the issues with the wireless keypad were ever resolved? Would love to integrate this into my setup.

Mine is back to working with the latest CM4 release.

Nice, just ordered one. Thanks!

For mac users, took a workaround to get it fully functional. Apparently OS X doesn’t recognize the num lock anymore. Used to be the clear button, but don’t have that on my laptop keyboard. Install an app called Karabiner, follow the instructions at the bottom at this page: