Yet another dust shoe question

I’ve been using the Suck-It dust shoe since I’ve had my SO3XXL, and I’ve been happy with it. But it’s started cracking in spots and I’ve epoxied some repairs already. I’m thinking it’s about time for new one. So, my question is for those that have gone from Suck-It to either Sweepy 2 or PWNCNC, what is your opinion? Are either of those comparable, better or worse than the Suck-It?

Thanks for your help!!

If you have a 3D printer, you could print a super sized 4" version of the Suckit if you want.

I have an XXL that I bought a dust shoe from etsy that attaches to the bottom of my Dewalt router. It has two brush sets and I am quite happy with it. However I bought an XL used and bought the sweepy 2.0 for a Makita router. I had to adjust t he clamp pressure but otherwise I like the Sweepy 2.0. What I like is the ability to move the Sweepy up and down. The draw back to all router mounted dust shoes is they can get in the way when cutting deep pockets. I had a Suckit clone but I hated it. The base had screws to hold it on and was a pain to remove. Plus even after removal of the base the two arms were in the way of tightening my collet.

I have seen the PWNCNC and some others that are independent of the router and they look good. The PWNCNC the last time I looked at with the configuration I wanted was much more expensive than the Sweepy 2.0. Now you may not need all the things I chose but the price was $120.00. The base was $60.00 but to fit my Dewalt it doubled. 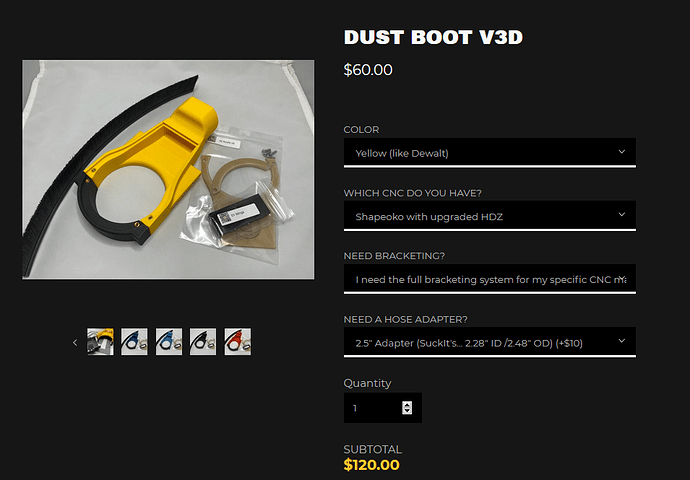 A more direct comparison to t he Sweepy is their router mount model V5b which was $78.00 when configured for my Dewalt. 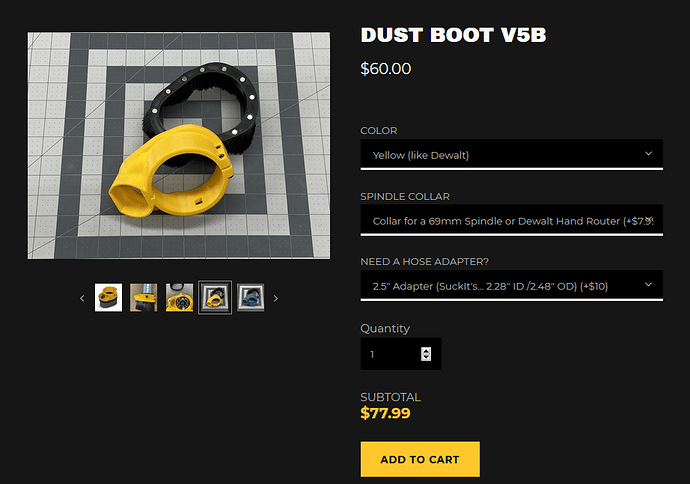 So here is the TiteCNC dust shoe I got for my Dewalt.

I think you can see that the Sweepy 2.0 is a bargin compared to the other brands. My examples were for a Dewalt and for a Makita/C3D router it may be different. One thing I like about the Sweepy is the vacuum is right over the cutting. My TiteCNC for the Dewalt the suction is offset and when you cut toward the front of the machine you get all the suction off the end of the wasteboard and very little pulling the chips where the cutting is happening. In the picture you can see a black base that has no brushes. That base has been useless because it is deep and I am afraid of banging it on the project. 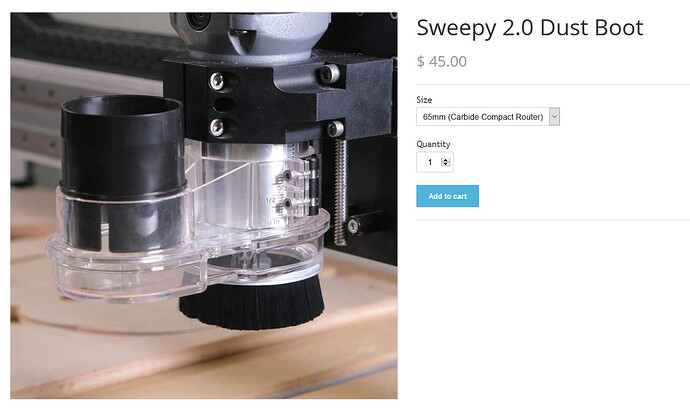 My XXL came with a Sweepy 1.0, and as it was my first foray into CNC machining, I was pretty impressed with it, but I soon became aware of it’s shortfalls.

I then bought a Sweepy 2.0 and am even more impressed with it!

Clearly how to control dust is a personal thing, but I think the Sweepy 2.0 provides good value for money and does the job really well.

I will note that the biggest change w/ the Sweep 1->2 is the 2.5" hose connection — it is markedly less noisy and I highly recommend it.