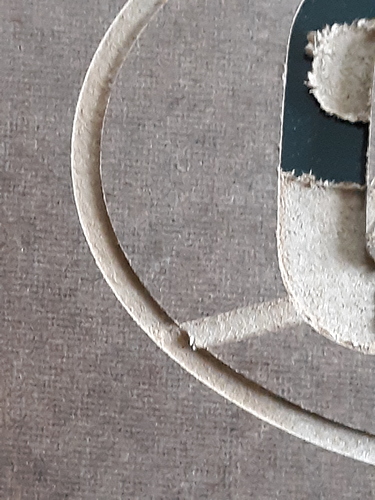 Any idea what’s causing the tool path to leave a mark? Retraction is set at 10mm and pocket is 4mm? Thanks

The material isn’t held down properly, or the table isn’t square. If you look, the curve gets “deeper” towards the “bad cut” - this indicates the material is closer/higher here. The other indicator is that in the cut through portion on the right, the cut doesn’t go all the way through there…which is the opposite…that it’s further away there… If the clearance height is set close to the material, you’ll see the endmill drag across the material where it’s popped up a little.

Hi Mike,
Thanks for taking the time to respond. Perhaps I should have explained that this is a scrape piece and what you’re seeing is the cut through to the design on the other side. Material is held against a right angle fence with cam clamps----no way it’s not secure/square.

On a side note…I didn’t save my work before hitting the create G-Code button, is there any way I can get back there through the G-Code?

Not saying it isn’t held securely, saying it’s “wavy” in the Z direction. this happens a lot with thin material held around the edges.

hey there. I am having the same issue 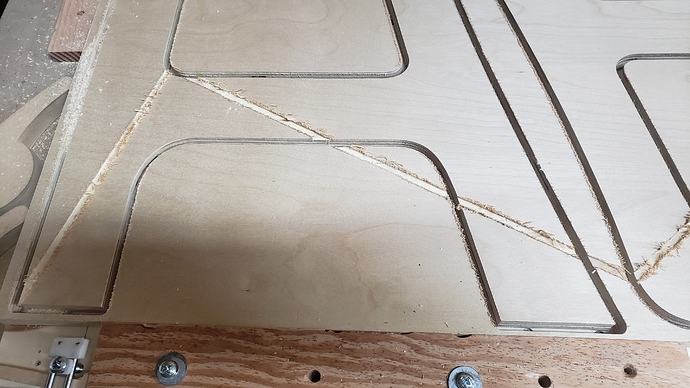 This looks like a belt tension issue, where the belt is slipping.

In addition to Z belt tension as @Luke said, check that your Z axis pulley is not slipping on the motor shaft. Make sure the set screws are tight.

when mention belt tension do you mean tight or slightly looser the thight?

could too tight be an issue? I just checked everything and the the belt is definitely tight.

More likely the problem is the machine can’t retract fully due to the tooling engagement of slotting or the machine getting pulled into the cut.

would this make a difference because it isn’t the first time I have cut this tool path?

Did you check the set screws in the Z pulley?

yup it is tight. I will loosen it and tighten it again maybe a bit looser then it is now. not to sure why it would change over night.

Hey @ge-off, just to make sure we’re talking about the same thing. The set screws are what hold the pulley on the motor shaft.

I had a similar problem when the pulley on the Z axis motor was slipping between the two set screws (the flat part of the shaft). Because it is hiding behind the plates, it took me some time to see it slipping. It was doing this only under load, holding it by hand did not make it slip. I had checked those set screws and they were tight but in fact one of them was not going all the way. Those set screws are way to small. Make a line straight across the end of the pulley and shaft with a marker and move the carriage, it the lines are no longer straight, the pulley slips. If this is the issue, you can get bigger set screws (they are M3 set screws) and drill and tap larger holes. Since I did not have small metric set screws, I used #8 set screws instead. @RichCournoyer used larger cap screws instead of set screws, they have the advantage of being easier to tighten and won’t strip in the hole.

I was able to correct my issue by messing with the belt tension on the Z axis.

Well, it could be your endmill it’s loose and slipping out. Or, if the endmill is not as sharp it could be grabbing the material, as Will mentioned, and pulling itself in.
You’re losing Z height somewhere, and you might just need to watch closely to see when and where.
Does this happen with other toolpaths?