Curious if anyone else is experiencing significant play/backlash in their Z-Plus? I’m seeing about 0.5mm/0.020 inch of travel

I’ve been milling aluminum and noticed all my fist cuts were really deep and really killing my bits, but my second and 3rd passes were the right depths. I had set my cuts to 0.030 inch with cut depth of .010, but they were coming out at 0.050 inch with the first pass taking a full 0.030 off (0.020 too deep).

I’ve gone through a BUNCH of elimination checks:

When I put my micrometer on the rail slide, I can lift up/pull down and get nearly 0.5mm of travel (.45mm to be precise). As far as I can tell the screw itself is not moving into the motor. Holding the screw firmly and moving the z up and down I can detect no movement. Also, placing a sheet of paper between the screw and the stop post, I don’t observe any movement in the screw when I lift up and down. 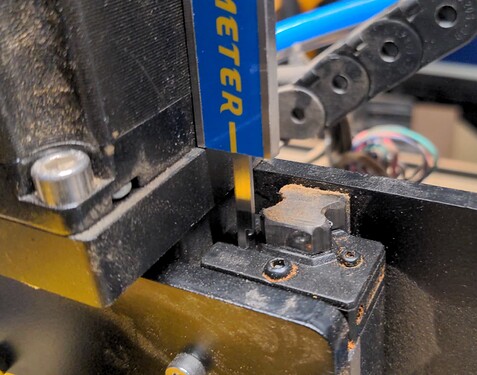 When setting zero, physically pushing down on the router to make sure it is at bottom before it touches my bitzero has given me more consistent results. My guess is the router creates downward thrust, especially at higher speeds, and forces the z axis lower due to the play, but when setting zero it is a little bit higher.

So… I think this the main nut / anti backlash nut. I can’t find precision specs on what to expect, but nearly a half mm seems like a lot of play, especially when bits are cutting 3x as deep on the first pass. Maybe this has always been happening and just didn’t notice on wood, it’s just very obvious on aluminum.

Anyone else seeing this much play or have an idea on the specs? Meanwhile - I’m going to email support tomorrow, see if there is a way to get a replacement main nut / anti-backlash nut.

I get the same thing, or even slightly worse.

I took apart the carriage and looked at down the anti-backlash nut is mounted. I’m probably not understanding how it’s supposed to work, but it seems like it’s designed upside down.

If the anti-backlash nut was uppermost, then with the same tension, both the tension and the weight of the carriage are working to keep things in one place. Unfortunately, the Z prox switch is in the way, so the floating part of the nut can’t be uppermost.

I had wondered about the same thing, contemplated moving the prox switch and testing that theory, but thought I’d wait until I hear from support.

I’ve also tested this with a sheet of paper. I set my movement to 0.05mm (in cncjs) and drop a flat 1/8 endmill onto a piece of paper one step at a time until I can’t move it.

Then I reverse and start going up until the paper moves. It takes 8-10 steps, which I calculate as 0.4 - 0.5mm of backlash in the nut/leadscrew assembly. Reverse again and start going down and again it will take 8-10 steps to lock the paper, even though the paper was just freed on the last step up.

I saw some other posts seeing about 0.04mm of backlash, which seems reasonable enough, this is 10x that and clearly visible in the cuts.

The bummer is I got this 2.5 years ago and have been pretty happy with it cutting wood. I started trying to cut aluminum 1 year ago and got really discouraged with the number of bits I was breaking and the terrible quality (despite scouring all the forums, watching @wmoy excellent videos, etc.). I ended up tabling it because I was so frustrated. It wasn’t until about two months ago that I decided to come back to it and I realized my first cuts were so deep and that’s what was killing my bits (and causing me to lose steps, etc.). I spent a lot of weekends now troubleshooting and eliminating every other thing I could before I honed in on the leadscrew/nut assembly. Pretty confident that’s where my troubles lie. Regretting not going with the HDZ, can’t remember if is was out of stock or I didn’t want to spend the extra money at the time

I won’t take credit for finding this link, it was in another post, but perfectly describes the issue: Backlash in Lead Screws: What It is and What to do About It. Kinda thinking the spring tension on the lower anti-backlash nut is not enough.

Unfortunately, in the current configuration increasing the spring tension will make things worse, until the spring force exceeds the weight of the carriage (including the weight of the spindle). That may not even be possible with that spring, and if it is I bet the wear on either the nut or the screw will be ferocious.

Here are my thoughts on your problem and some of this comes from experience with other equipment and this is the order I would approach your problem.

I would first clean everything and then test with a dial indicator. A dial indicator will stay preloaded and will give you the most accurate reading. You will most likely get even worse readings not only from a dial indicator but from a good cleaning. As you remove all the contaminates it will increase the play/backlash in your readings.

Check the motor shaft for movement when operating it up and down and also the Z gear shaft and its bearings for play or any unwanted movement. Check the coupling to the motor and shaft for excess play if there is play in the coupling that slight play can give you the readings you have.

I would first clean everything

Did a full tear down and component check.

test with a dial indicator.

Good call, I just checked, similar results - I’ll do a pre and post check when I change the lead nut. (I always forget I have that, I reach for my micrometer first from habit

Yep, did that in the tear down. All the rail bearings are good. Carefully cleaned, made sure all the bearings were in place, and added a tiny amount of super lube. All are good, no lateral movement.

No movement in the motor shaft that I can discern.

and its bearings for play or any unwanted movement.

Check the coupling to the motor

No coupling on the Z-plus motor, it is a direct drive captive screw motor like this one (couldn’t find the Nema 23 version, but same thing) :

Support is sending me a new lead screw nut and anti backlash nut that should arrive today (as always, kudos to Carbide3D’s excellent support team and policies!).

I’ll do a pre and post measure with the dial indicator (thanks for the reminder @avetrano!) and post the results here.

Meanwhile, I took advantage of the Black Friday sale and ordered an HDZ… but I still want to get the Z-plus operational.

100% confirmed it was the leadscrew main nut and anti backlash nut. Here’s a video of the new nut (on the top) compared to the old nut (bottom): 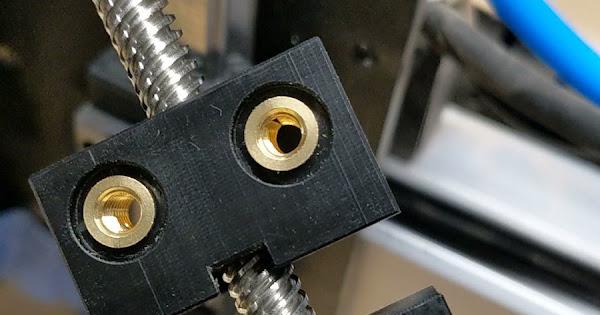 You can see significant play in the old nut. Both the main and anti backlash nut are plastic (it feels like nylon, but hard to say) including the threads. Looking at the old nuts, the threads were about 1/2 the thickness of the new nuts. No way to get my micrometer in there to measure. There’s also no wiper to keep dust out. And to be clear, I do run dust collection and the whole system has about 150 hours on it based on SuperPID data. Based on the problems I was having, I think this started around 75 hours.

Knowing what I know now - I would skip the Z-Plus and go with the HDZ (which I did order).

The part replacement was easy, 20 minutes, I’ll document in a separate post so it is easier to find.

CARBIDE3D - could you add the nut to the store as a maintenance item? Seeing the video here I suspect I may have a similar issue. Just like V Wheels, I don’t mind replacing them on my own dime when needed.

Dropping a link to the replacement post in case someone lands here looking for it:

Z-Plus Leadscrew Nut Replacement - How To Guide How To

I was having issues with excessive depth of cut that I finally tracked down to a worn leadscrew main nut/anti-backlash nut assembly, documented here: Z-Plus play/backlash question Support was kind enough to expedite repair parts, it took about 20 mins to replace and was easy enough to do. Here are the steps for anyone else with the same problem. This is the assembly that needs replacement. Note that the nuts are plastic (feels like nylon or similar). The main nut is held on with the 2 screws a…