So if you want a 45 degree edge on a board then you use a 90 degree vee bit which would cut at 45 degrees. Likesise a 60 degree bit consists of two 30 degree angles equaling 60 degrees total.

If you have a bit defined in Carbide Create as a 45 degree bit then the effective angle for cutting would be 22.5 degrees. Cutting a 22.5 degree angle on the edge of your work piece and joining two 22.5 degree angles would result in 45 degrees and not 90 if you are trying to make a box.

Your question about making a 45 degree angle on 3/4 inch oak may be possible but the length of the cutting bit is the determining factor for cutting the depth of an angle. Other applications like Vetric and Fusion 360 and others are easier to make the long cut on 3/4 inch material but others will chime in on how to do that.

It is not a race. Both our answers are correct.

I understand. Can I use any other 90 degree bit? Because of the depth issue that you mention.

That I cannot answer. I have never cut a 45 degree angle on 3/4 material. You would have to look for a different bit maybe. It may be possible with the #301 or another but I just have not made one. In John Clarks video I linked to the material size is .24 inches. The #301 bit is 1/2 inch cutting depth.

You could experiment and set up two squares like John Clark did but with the cut depth you would have to adjust your material to get the 45 degree and still have the size box you want. Sometimes it is just trail and error finding a solution. a2+b2=c2 so .75 Squared + .75 Squared =C Squared (use square root of C Squared) 1.06 inches length

Someone mentioned earlier on the forum the 70 Maximums for Mercenaries and #70 says:

Failure is not an option - it is mandatory. The option is whether or not to let failure be the last thing you do

Hopefully someone that has done this can chime in.

And now for something a bit different — going to work out a miter box here, using Literate Programming: http://literateprogramming.com/ We start with a template file: https://www.texdev.net/2009/10/06/a-model-dtx-file/ which we start by loading into a suitable TeX editor and editing…

Worked out doing this previously in the Lounge as a part of another project. Going to work through it here from scratch in the hope of making it all a bit clearer and more useful. First, we are going to be cutting a 45 degree miter at the end of a 10" (254mm) wide board which is 3/4" (19mm) thick using a #301 1/2" endmill with a 90 degree taper. Origin will be at the bottom left so as to facilitate using the Probe for setting the zero. We will work this out in 2 programs: BlockSCAD/OpenSCAD (…

Another newbie question - is there a reason that you wouldn’t use a table saw to do this in one step?

@clintonmagus Right…or this bit using a handheld router or in a router table?

Couldn’t you also model the edge as a 45 degree chamfer in CM Pro?

a reason that you wouldn’t use a table saw to do this in one step?

With hammer in hand … everything looks like a nail! 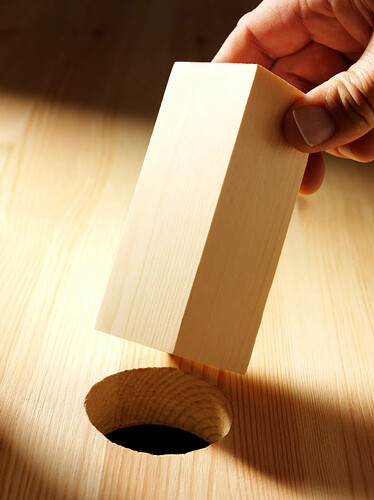 I’m not poking fun at the original idea…but if we’re going to other software packages and doing all sorts of manipulations to get a box to join, why not do it a more tried-and-true way? We’re after precision…I get that…and a 45 degree tablesaw cut might not get you what you want (depending on a lot of factors), but the chamfer bit will. And there’s still the idea of modeling the grade - but I don’t think it will be smooth enough to be a joint.

I tried doing joinery with the 3D modeling features, but never felt quite comfortable enough with the dimensions since it wasn’t possible in Pro to rotate parts and subtract one from the other to check the fit.

@WillAdams Yes…and given the variances of a ball-end for the finishing pass, I can’t imagine the joint would be very tight anyway.

That’s a good point about possible variations — I’d like to think the machine would be precise enough to make them small enough to fit w/in a glue line, but I’m having enough trouble just directly drawing and cutting joints it hasn’t seemed feasible to be looking into yet — maybe once I finish up the mortise and tenon joints I’m working on now.

I’m not sure I understand that, Will. Wouldn’t it (theoretically) work if I rolled one of these into a 90 degree orientation with the other? You’d have to work out the rest of the geometry for the pieces, but just having these two edges at 45 angle elevations would do the trick if the cut was clean enough…yes? 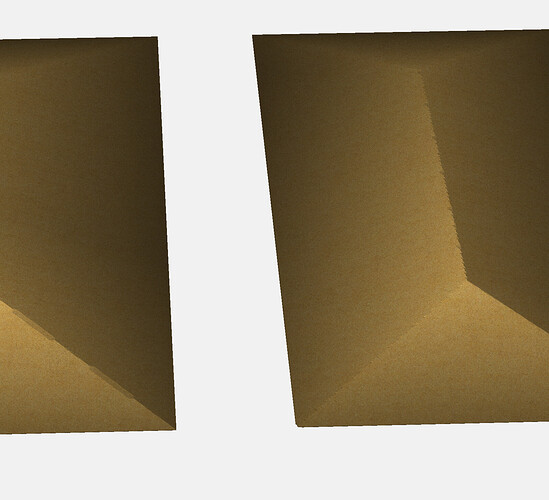 Yes, it should work — I just found the need to extend past the stock a pain, and was trying to do slightly more complex joinery than a mere 45 degree miter (which I found easy enough to do with a V carving as noted at the links I posted).