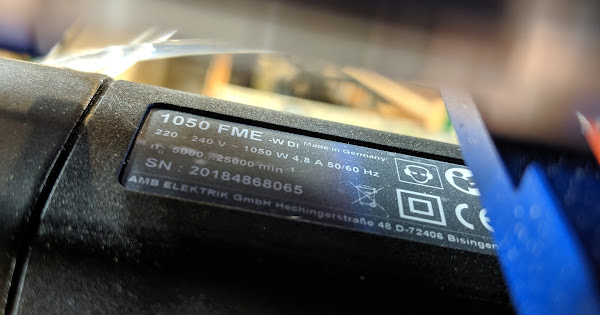 I bought mine through Midwest Circuit Technologies (@justinclift gave a link a few entries above). Larry at MCT hadn’t seen the FME-W DI before I ordered one, but he’s been able to get questions answered for me from AMB’s engineering support people in Germany, so at least that side of things has been fine. I haven’t needed to RMA anything; I’m not sure how that’d work out. Probably better than generic spindles, at least.

It doesn’t seem to have anything for measuring the length of the new tool after picking it up, which many autochanger systems have.

Not sure if GRBL could really cope with that anyway. I’d probably use a different (non-GRBL) system that could, but each to their own, etc.

You could get a step-up transformer. From what I’ve seen, only the FME-800 is available for 120 V. As long as voltage and frequency are within the specified operating range, they shouldn’t affect speed. Speed on this router (like the Dewalt and Makita) is controlled by circuitry which senses the rotation speed and provides the proper voltage to the motor windings to maintain it at the setting (if there’s enough power).

This one doesn’t either (pre-set in software?) That’s a really quiet spindle, especially compared to routers like the AMB!

Good point. That’d probably be the way to go.

The AMB (Kress) I bought, was from DamenCNC, as I was in the EU at the time:

They have their own ATC systems, for higher end spindles:

The pricing on those… likely need to sell the family car, plus some kidneys, and maybe auction off a few kids.

The AMB with the automatic tool changer (a fraction of the cost) isn’t listed.

Their website does have some interesting pieces on there, eg aluminium vacuum table without a kidney-sacrificing price tag:

Well the system appears to be designed to operate in both electrical world, I was afraid that it was a European product made for Europe since these details were not mentioned. .

A few people here have written macros to measure the endmills and reset the Z0 after a tool change using a probe and CNCjs. @Luke just posted a YouTube video showing this for a manual tool change. I’m would think that this could be incorporated into an automatic tool change routine.

Wow, yep. Combining those two together looks like it’d be a win.

Sorotec sells them (only in the EU though)! There’s no claim of runout comparable to that of the 1050 FME-P (3 times improved over standard). The Jianken ATC seems like a great value especially considering it’s performance . Check out his other videos too. More on noise here.

That Jianken ATC video is awesome. They should pay him for increased sales.

I have a spring-loaded tool length sensor that I picked up off of Amazon, plus one of Luke’s probe blocks (but not the frame for it shown in the picture). It’s perfectly possible to have multiple probes connected to Grbl at once, and actually kinda handy…

I did a bunch of ATC experimentation a month or two ago, but have spent the time since then focusing on other parts of my CNC. It’s moving onto a more permanent home (instead of a pair of MFT/3 folding tables) this coming weekend. After that, I can re-assemble my tool holder and start integrating things better.

In all honesty, Grbl is just about the worst platform imaginable for driving an ATC. It only has ~3 outputs–coolant, spindle direction, and spindle speed, and I need to use those to control coolant, spindle speed, and tool loading/unloading. I could just use spindle direction (M4) to drive the tool unload sequence, but it’s too easy to do that by accident, and I’m trying to avoid 25,000 RPM carbide-tipped spinning tops in my shop. I have an Arduino sitting between Grbl and the spindle (and solenoids that drive eject and unlock); to start a tool change cycle it needs to have the spindle speed set to 0 for a few seconds, and then trigger unlock via M4 S1500. That’ll unlock and eject the tool after 5 seconds. Turning off M4 re-locks the tool. There’s a moderate amount of safety code in place already.

As I said above, I’m using CNCjs, and I have a macro that turns ‘T3 M6’ (or ‘M6 T3’) into an attempt to unload the current tool into the slot that it originally came from, followed by a move to slot #3 to pick up a new tool.

My medium-term plan is to add a serial port interface to my Arduino tool change controller, and then have CNCjs drive that directly. That’ll allow 2-way communication, and will open the door to being able to tell if specific slots are already occupied, etc. That’ll also get around nearly all of Grbl’s shortcomings in this area.

The code for the Arduino lives at https://github.com/scottlaird/cncatc. It’s not terrifically useful for others yet, but that will change eventually.

The code for the Arduino lives at https://github.com/scottlaird/cncatc.

Oh cool! You’ve a software background too, and know your way around Go. Excellent.

Seen TinyGo yet? It’s Go for embedded devices, with AVR support currently happening. AVR is a bit dodgy/buggy though (will improve over time), as most new micro stuff these days seems to be ARM or RISC-V based. The code generation for ARM seems ok.

Point being, you should be able to wrote stuff for your Ardunio directly in Go if you want.

Interesting. The C++ subset that Arduino uses isn’t too bad for me–C is mostly fine as long as you don’t have to deal with strings, memory allocation, or particularly large codebases, and most Arduino code doesn’t hit any of those :-). My biggest problem was getting <4 usec timer precision so I could do a reasonable job of reading Grbl’s PWM spindle speed output, and that ended up being a library issue, not a code issue. Still, TinyGo will be interesting to keep an eye on.

I’d really like to see a comparison of the Kress and Mafell spindles — the specs on the latter seem quite good, and the availability of a 110V unit is awful convenient for folks not in 220/240V locales.

Which Mafell? The FM 1000 WS, with its “tool-less quick-clamping device?” It’s kind of an interesting comparison to the AMB 1050 FME-W DI, but according to Mafell’s website it’s a 230V 50 Hz device.

Ignoring that, the FM 1000 WS is fascinating. It isn’t a tool changer, but it should allow easy manual tool changes, which is probably good enough for a lot of uses. The Mafell looks like it sells for EUR 530, vs EUR 1,200 for the AMB. AMB toolholders are pricy, too, and the AMB needs extra hardware for driving the ATC as well (a compressor and a couple solenoids at minimum). So effectively speaking, the Mafell is 1/3rd the price.

The AMB uses ER16 collets, and will take up to 10mm or 3/8" tools. The Mafell only takes 8mm tools, unless you use an adapter sleeve. They sell a few metric sizes plus 1/8", but no 1/4". It looks like they make some sort of collet attachment, but I’d be worried about runout in that case. It shouldn’t be that hard to find a 3rd party 1/4" to 8mm sleeve.

They both weigh around 3 kg, vs 20+ kg for a lot of Chinese ATC spindles.

All in all, it looks interesting, but I don’t see any easy way to power it in the US. Also, I’d miss the ability to directly control spindle speed via gcode, but I could twiddle a lot of dials for $1k.

Has anyone considered Mafell FM 1000 WS? This machine is very silent and easy to use.

The AMB 1050 FME-P supports 10mm endmills which are 25% larger than the 8mm endmills that Mafell FM 1000 WS supports. They both have the same output power, so the Mafell’s maximum MRR would be 25% less than the AMB’s and it’s cutting force would be 25% higher for any given MMR. Inner cone concentricity (“0.01mm”) is the same on both, but the Mafell’s clamping nut apparently causes far more runout (“0.05mm”) than should be achievable with precision ER16 collets on the FME-P. Both routers use shaft driven cooling fans, so noise will increase significantly with speed. The “Very quiet, <75 dB” is probably at minimum speed (4,000 RPM).

@wingrider62
Isn’t there a VFD parameter for the spindle’s power/current rating too?

This topic was automatically closed after 47 days. New replies are no longer allowed.