Advice on my first real project (jewelry box made from wood)

I’ve only just started to dive into CNC’ing, so I’m kind of jumping into the deep end of the pool with this project.

Have you got advice from the recipient yet? Is this even useful to them?

Advice from the recipient?

Are you sure you are ready to do this as a “first” project? Ever made a box before?

No, but it sounds like a fun project. If you have any advice on how to do it, let me know.

I wouldn’t waste my time doing this as a two-sided project if all the other side needs is the edges rounded over. That’s better done with a stand-alone router.

The rounding on the edges are “squircles” (the special roundings on iPhones and MacBooks). I’d like to try my hands on making a 2-sided project.

I did a simpler file of a similar design which is posted to:

A fitted box with a base with 4 compartments, suitable for pencils and small stationery supplies and a lid.

and was written up in:

but you may find the use of multiple toolpaths for roughing and finishing passes of interest.

A design which uses both ball-nosed and square endmills to get a rounding effect is shown in:

A traditional wooden trivet like to one made on a router table.

and on the basis of doing it I endorse @fenrus’s suggestion of a hybrid rounding/flat-bottom endmill such as is used for bowls — I’ve had one in my shopping cart for a while now and will buy it once the holidays are over. Note that it can’t be entered into certain CAM tools, so the preview won’t quite be right (you could have two sets of file paths, one for previewing done with a smaller ball-nosed and square endmills) and one for the actual cutting as a work-around.

In addition to @WillAdams tutorials, @45rpm John Clark has a three-part series on YouTube that could be really useful for learning the basics of box making on the ShapeOko:
Box Making with ShapeOko

The project looks good. I would make one suggestion, make less little compartments. The small compartments are hard to get jewelry out and wastes a lot of space. The side and main compartment are good bit the small pockets will be hard to retrieve objects out.

Thanks for all the suggestions. I finally finished the box and holy moly did I learn a lot!

It’s definitely got some production errors, but I generally like the result: 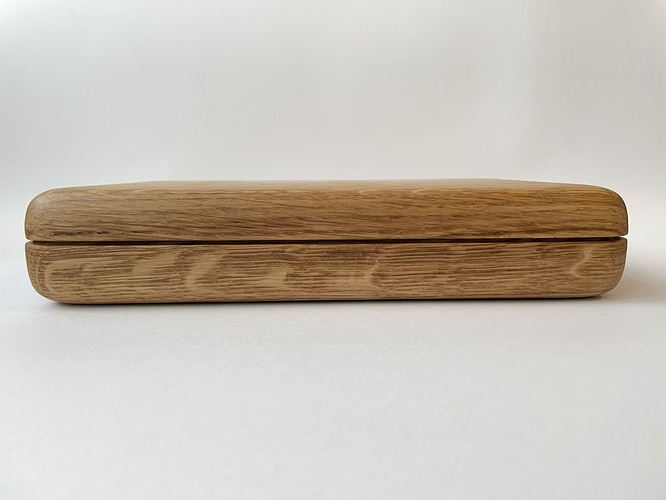 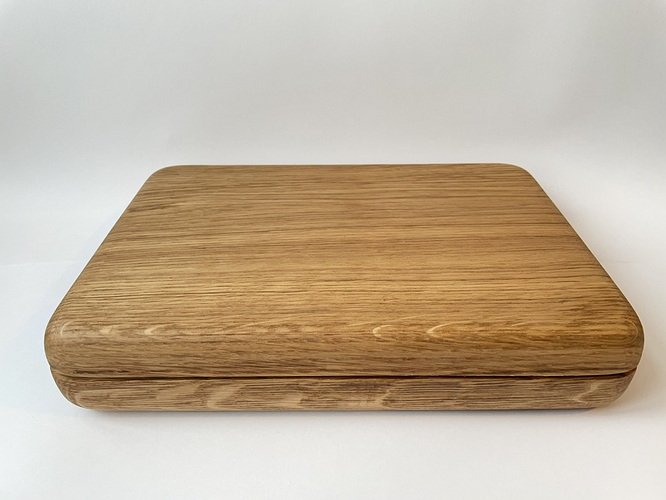 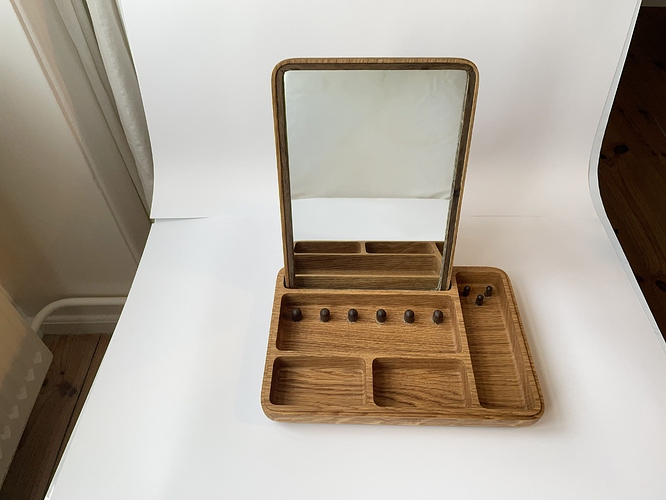 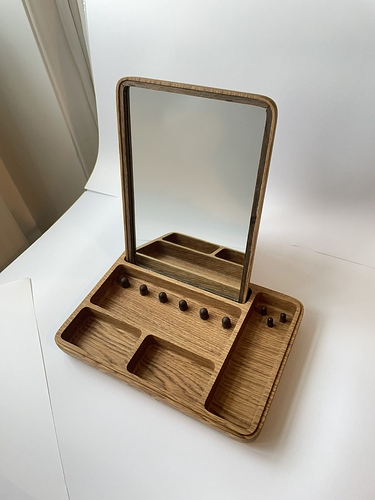 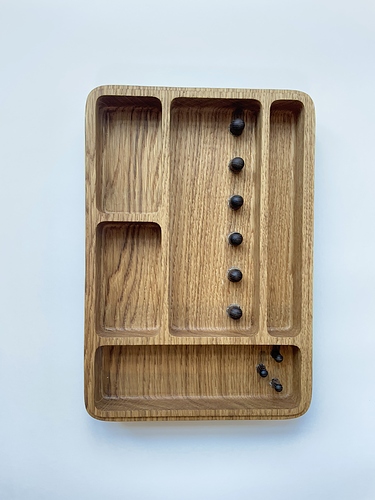 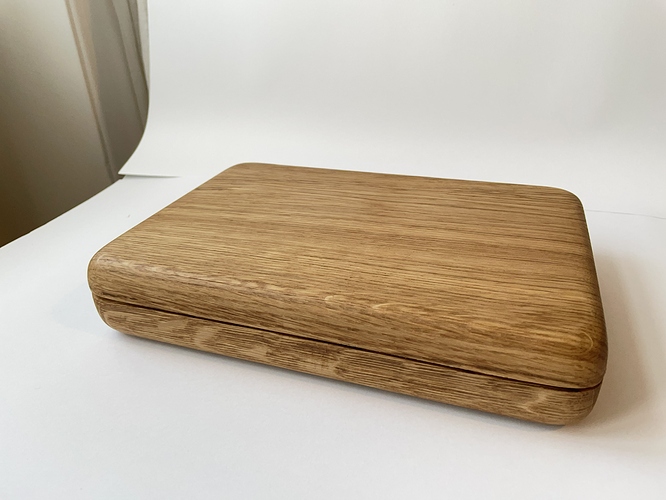 What do you think?

I’ll have to make one for my mother-in-law (since she lost some jewelry while traveling a while back).

I wish MY first real project looked like this…great job.
Now you have to tell us all the details about which endmills and toolpaths and feeds and speeds you ended up using!

@holgersindbaek It looks great. I like the hingeless design for the lid - very clever!

How did the Wenge CNC? I’ve used it on a number of traditional woodworking projects and love the way it sands out…but it does tend to splinter (and they seem to hurt a lot more than your normal splinters!). I’d be interested if you used any special speeds for the Wenge itself.

Thanks @Julien! I wish I wouldn’t have taken some pictures in the process. I almost didn’t make it, since the first try of each part broke. For feeds and speeds I basically just used the feeds and speeds for pine from the Shapeoko cheat sheet. I did this because I started off by making a test of the top part in pine. I basically just kept the same program from Fusion 360 and turned down the feed percentage in Carbide Motion. Definitely not the best way to accomplish things, but for a newbie that needed to get something done fast, it seemed to work ok.

It requires you to sit and watch the machine ALL the time when it’s running. But I think I would have had to do that anyway since it’s my first project.

For the big rounded corners on the box (which I made as squircles and not fully rounded corners), the rounded corners in the pocket of the box and the rounding of the “buttons” made from wenge, I used a 6mm rounded cutter (https://www.cncfraises.fr/carbures-2-dents-hemispherique/121-fc2ds600.html).

For making all the pockets I used a 2 flute straight cutter (https://www.cncfraises.fr/carbure-helicoidale-2-dents-queue-6-00/67-fc2dh600.html). I think it might be beneficial to use a downcut endmill the next time. I don’t know if there’s a quicker way to cuts such deep pockets? That part of the program definitely took the longest time.

I used the same endmill to face off the surface. I think using a proper facing endmill might be better to use next time.

For cutting the rest of the wenge, I used a 1/8" 2 flute straight cutter (https://www.cncfraises.fr/fraises-carbures-helicoidales-2-dents/127-fraise-2-dents-317-mm-carbure-helicoidale-xl.html). That seemed to work time.

One thing that I’d like to improve on (I think I’ll end up making a couple more) is to make the buttons threaded instead of using glue. I see that CNCFraises have threaded cutters (https://www.cncfraises.fr/236-fraises-a-fileter) that seem to work on wood as well. With those I guess I would be able to make M8 threads in the box: 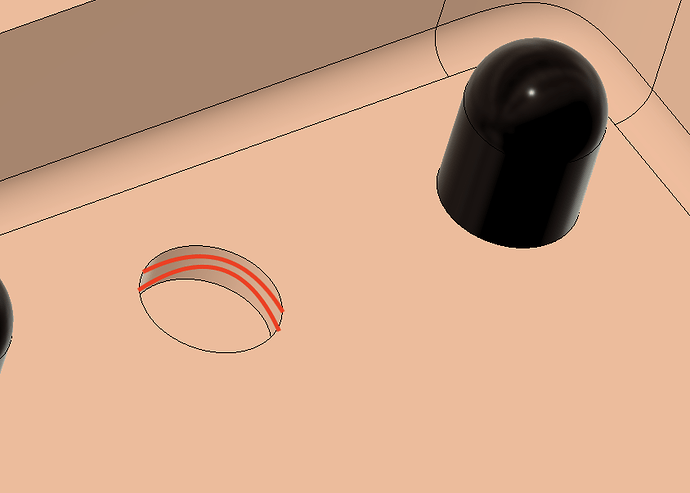 I’m not sure how I would be able to make M8 threads in the wenge button. Any suggestions @Julien? When I search the community, the issue of making nuts and bolts in wood seem to only have come up once (Making wooden bolts and nuts?) and it didn’t seem like a good solution have been found.

I’m not sure how I would be able to make M8 threads in the wenge button. Any suggestions @Julien?

I’m not @Julien (I can only aspire to greatness…), but just get a tap set for wood. They’re cheap and you can easily make the threads…

@GJM That would probably work as well. I didn’t even consider that.

Maybe it would be possible to assemble it using dowels instead? I might still need to use some glue with the dowels though?

Downcut endmills are great…to avoid tearout on the top edges, but I don’t think you can push them as far as upcut endmills due to lower chip evacuation capabilities. My usage for them is to run a single contour finishing pass in a pocket roughed with an upcut, to get perfect walls and edges. But to them their own!

I don’t know if there’s a quicker way to cuts such deep pockets?

In wood I now tend to use deep adaptive clearing with low width of cut and high feedrate, rather than a lot of shallow passes. There is no right or wrong answer but it did reduce my cutting times significantly for large pockets and it “feels” right to use a large part of the cutting length rather than just the last 2mm all the time.

to make the buttons threaded instead of using glue

I’m with @GJM on the threading, for the female part I would just use a manual tap (both the the hole, and the buttons). CNCing the hole is quite doabled (I have a set of thread milling tools I need to try someday), but milling the threads on the buttons sounds like a lot of care and effort for something that can be done easily by hand.

Thanks for the feedback

I see what you mean with the the down cut endmills. I’ll might use those the next time I do pockets like that.

I also tried making deeper cuts in the pockets, but it felt like it put a lot of pressure on the wood. I’ll give it another shot though. Would it be faster to do with an 8mm cutter? What about a facing cutter?

One error that I forgot to mention and that I don’t really understand how happened is the following… the wall is 1mm thinner on one side than the other: 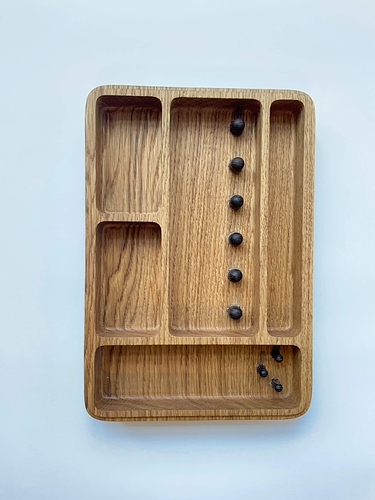 On the right side the wall is 1mm thicker than the left side. I’ve checked Fusion 360 and it doesn’t seem to be an error in the program. I’ve also used metal dowels (or whatever you call them) to turn the part, so I don’t think the placement of the item has changed either.

Do you guys have any idea of what could have happened?

Maybe it would be possible to assemble it using dowels instead?

Dowels would work…The real question is whether you want to be able to remove the pegs. If you don’t want to remove them, then gluing them into place is way to go…why go through the effort of screws if you don’t need to?

Glue always seem to leave some residue, which I don’t like.

But I think you’re right that threading things will be too much work.

I also tried making deeper cuts in the pockets, but it felt like it put a lot of pressure on the wood. I’ll give it another shot though. Would it be faster to do with an 8mm cutter? What about a facing cutter?

It all depends on the toolpath settings you had. For a conventional toolpath where the first cut in each layer is essentially a slot, you cannot go much deeper than 50% of the cutter diameter. With an adaptive toolpath, helical ramping, and low width of cut (say 0.8mm), you can go much deeper (typically 200%) and the cutter/machine won’t struggle as much, just because it never ends up slotting, and basically cuts at 0.8mm stepover (in this example) with very low tool engagement. If you want to share your Fusion360 file (or even a test file with a similar pocket) I’m happy to create a few toolpaths as I would do them, for the sake of discussion.

An 8mm cutter is not really required, you could use one and increase the material removal rate, but it also produces a lot more mess, so the dust collection (and workholding…) must keep up. My go to cutter for pocketing is still that exact same 6mm 2-flute you used.

Facing cutter: I would never use one for pocketing, if only because it’s so large you need to use a very limited depth of cut, so it would take forever to mill a deep pocket anyway (and possibly be dangerous too)

About that 1mm shift: it can be a number of things, from the CAM (did you check the G-code file itself in ncviewer ?) to the zeroing, or maybe the dowels were not exactly centered ?

Don’t glue it. Just make sure the dowel needs to be tapped in. You weren’t worrying about removal before…why worry about it now?

If you make another make the sides a little wider and insert some magnets to keep it together during travel.

or… put magnets in the intersections of interior/exterior walls where the radius of the pocket corners gives you a little more room.