Upgrading to Shapeoko Pro XXL or go for a completely different machine?

I’ve been active on this forum since December where I got my Shapeoko and made my first project, which was a jewelry box for my girlfriend: Advice on my first real project (jewelry box made from wood) - #11 by holgersindbaek.

Now I’ve refined that jewelry box and started to sell it: https://holgersindbaek.com/. People seem to really like it and I’ve got a lot of other products I’d like to make and sell using the Shapeoko.

The basic Shapeoko is not great for creating a lot of the same items though. It only really fits one of the jewelry boxes that I’m creating at a time and it’s a hassle to create them because of all the tool changes and the heat that builds up in the router that kind of forces me to leave the Shapeoko to cool down quite often. The Makita router is also quite slow at cutting out all the pockets in the mirror.

I really want to take a stab at making a small business out of this, which leaves me the question of whether I should upgrade to the Shapeoko Pro XXL or if I should go with a completely different machine? I’d still keep my trusty Shapeoko to create new products, but I’ll need something more effective for making runs of a product.

There are a few things that keep me from buying the Shapeoko Pro XXL:

What would you do in my situation?

Here are my thoughts:

Thanks a lot for sharing all those thoughts!

I’ve done what I can to optimize the tool change part and I’ve also worked quite a bit on optimizing for speed, but it still takes about 1.5 hours to do the whole bottom of the jewelry box. I don’t think I can get it down more than that with my current setup.

Which spindle are you using? Was it a difficult upgrade to do and does it make the workflow more difficult? From what I understand the spindles are both quieter and cooler. Is that true?

I was afraid that a machine with an ATT would be a lot more expensive. I could live without as long as I can do long runs on the machine. For example, on the Shapeoko Pro XXL I would be able to fit 4 of the jewelry box bottoms on (maybe even 6), but that would give a runtime of 6 hours. Do you think that would be a possibility with an industrial vacuum and a spindle instead of a router? What would be the limiting factor in that scenario?

I wasn’t able to justify automatic tool change (having a compressor running constantly is not something I want to get involved in) — but I was able to justify getting a spindle (milling motor) w/ a quick change tool mechanism which I’ve been very impressed with:

Requires making an adapter plate, and I still haven’t worked up dust collection quite as nicely infinitely adjustable as a Sweepy, but it makes for much nicer/faster tool changes than even the ER-11 collet units.

I would suggest putting two e-mails in:

For optimizing feeds and speeds and material removal rate I like the technique the Precise Bits folks suggest:

It sounds like you may need to optimize quite a bit.

The routers work well. Just keep them at higher RPM for the air cooling. I ran a Makita for 3 years and didn’t even have to change brushes. Some 3D jobs lasting 4 hours.

Mine has been good for repeat jobs. The BitSetter helps A TON if you don’t have one. Make multi tool jobs easy easier.

My SOPro with the C3D router can plow thru jobs. I’ve pocketed hard wood at 150 IPM at 1/4" depth of cut on a 14" endmill. It has the power, you just may need to spend more time figuring out the limits.

You mention December, and that’s only 5 months at most. Running a CNC takes time to learn. That’s why it’s a fairly high skilled job in the working world.

I wasn’t able to justify automatic tool change (having a compressor running constantly is not something I want to get involved in) — but I was able to justify getting a spindle (milling motor) w/ a quick change tool mechanism which I’ve been very impressed with:

A quick change mechanism sounds like a nice thing to have. From what I can tell, the Mafell spindle has a top RPM of 25000. That’s 5000 RPM lower than the Makita. I thought the big advantage of spindles was that they ran faster and therefore did jobs faster? Besides the quick tool change, what’s the advantage of the Mafell spindle compared to a router?

I would suggest putting two e-mails in:

Sure thing. Will do. Do you think they’ll be able to come with some suggestions? I think I might have mispoken above. The router doesn’t “overheat”. It just becomes quite hot after a while.

The routers work well. Just keep them at higher RPM for the air cooling. I ran a Makita for 3 years and didn’t even have to change brushes. Some 3D jobs lasting 4 hours.

I always run at 30k RPM and with the Sweepy and a vacuum. It still becomes kind of hot though. It doesn’t overheat as such. It just becomes hot to the touch.

My SOPro with the C3D router can plow thru jobs. I’ve pocketed hard wood at 150 IPM at 1/4" depth of cut on a 14" endmill. It has the power, you just may need to spend more time figuring out the limits.

You mention December, and that’s only 5 months at most. Running a CNC takes time to learn. That’s why it’s a fairly high skilled job in the working world.

You might be right. I’d love to see a YouTube video of that if you have the chance

The spindle install wasn’t difficult, it just took a bit to source all the parts I needed and do the wiring. There are lots of guides here on the forum. I only upgraded because my router had gained a bit of play in the shaft bearings which wouldn’t have been a problem if I wasn’t trying to hit pretty tight tolerances in aluminum. It would have been fine in wood. It does not allow me to run faster since the limit on the SO3 is not the router and it’s max is 24000 RPM but it is quieter than a router at 30k RPM for sure. All in, I spent about $650 or so for all the parts plus a week or so of evenings after work putting it together with a couple other upgrades at the same time. Are you using Fusion 360 for your CAD/CAM software?

I put up a few posts on the FB group:

I’m using Solidworks for CAD and Fusion 360 for CAM.

So the only reason for using a spindle instead of a router would be sound? It doesn’t run any faster and doesn’t cut any faster?

Thanks. I’ll take a look as soon as I’m allowed in the group.

The reasons I see to use a spindle are these:

Also, If you would like I can take a look at your Fusion CAM and see if I can find any quick changes that may help you.

There was a lengthy thread comparing the options at:

I’m trying to get my S3 XL ready for a lot of aluminum (sheet mostly) work. After reading so many posts on choosing among the drive options, here is my conclusion. Please chime in if you feel otherwise, and why. Water Cooled Chinese Spindles: Pros: Lower tool noise, however, the noise of cutting material is the same. Spindle owners consider it a substantial difference. Speed controlled via software. Precision mounts. Higher torque, but not really relevant due to the overall limitations of t…

Daaamn… you’re cutting through that walnut as if it was butter. I’m guessing walnut is the most similar to European oak when it comes to hardness and such? Poplar and birch are softer right?

You’re even using climb milling from what I can see? In my experience, the router has a much easier time with conventional milling, but it creates a lot more splinters.

Are you using the Carbide router in all 3 videos? You’re using the SO Pro on all 3 runs, right? Do you feel a big difference between the SO3 and the Pro?

@SLCJedi @nwallace If you want to take a stab at improving the cut time, you can find the file for the top here:

1 file sent via WeTransfer, the simplest way to send your files around the world

This is how things look now: 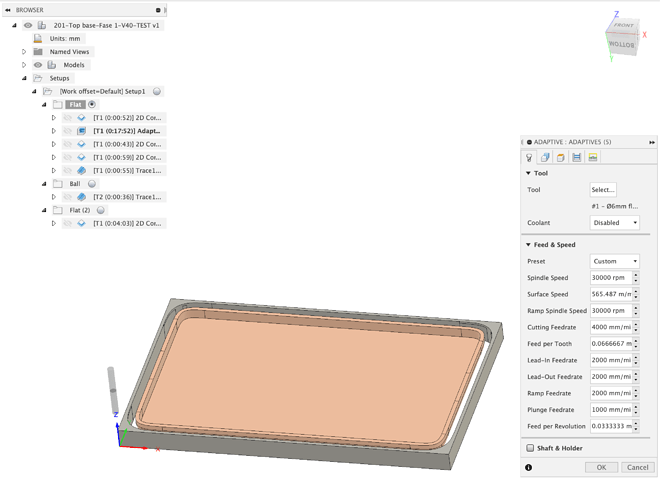 As you can see it’s cutting the big pocket that’s the culprit now.

With respect to your questions, I am probably unusual in that I’ve never run a job on my Shapeoko with a trim router attached. I bought it second hand, and when I turned on the router and heard the scream it made, I decided it was not for me and ordered a water-cooled spindle immediately. Spindles are much quieter - a dentist-drill compared to a chain-saw.

It might be worth considering that a spindle probably makes tool changes quicker.

Since the spindle is turned on and off via GCode, it has already quiesced and is still by the time it comes to the front ready for the new tool. So you don’t have to turn it off, wait for it to stop, and then change the tool. A BitRunner would do the same, of course.

The other efficiency is that ER-20 collets and nuts are readily available, and they hold a tool even when fully unscrewed. So if you have frequently swapped tools, you can leave them in their collet and just fully unscrew the complete assembly and then re-screw in the new one. This also gives you the chance to blow out the dust in the idle collets while the machine is cutting.

I don’t find a tool change takes more than a minute (okay, that’s an estimate… I haven’t timed it). It’s also a useful break to do a quick check of the stock and cuts, with the dust collector not covering it.

Would another option be to avoid such a large area cut, and optimise your design another step? Cut a ‘fence’ piece and match it into a shallow groove around the lid - two operations, but nothing like as much cutting time…?

The design is not going to be changed. That’s a no-go.

I forgot to mention that a ER-20 collet will take larger bits, such as a 12mm endmill. That might change the time taken for your main pocket clearance.