Looking for ideas on how to make some cleaner cuts.

I created a little 1/4" thick widget to test my Aluminum cutting to see if I can improve my surface quality. The idea was to have something relatively small with both convex and concave surfaces. 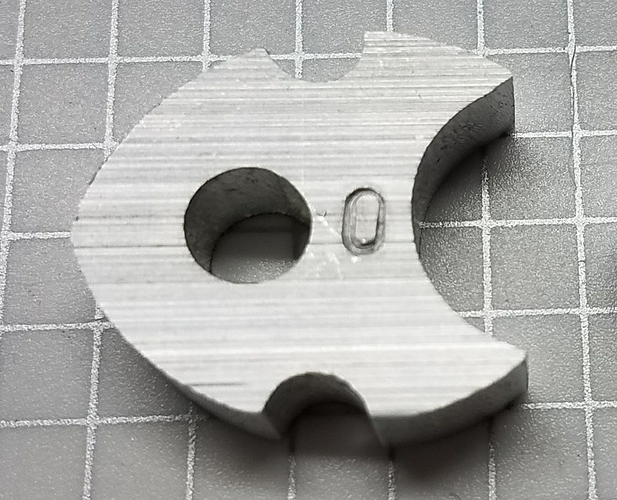 I cut the shape out using 2D Adaptive (trochoidal milling) and am happy with how that worked. Then I took some finish passes to take out the machining marks and this is what I was left with.

I was kind of hoping for better. 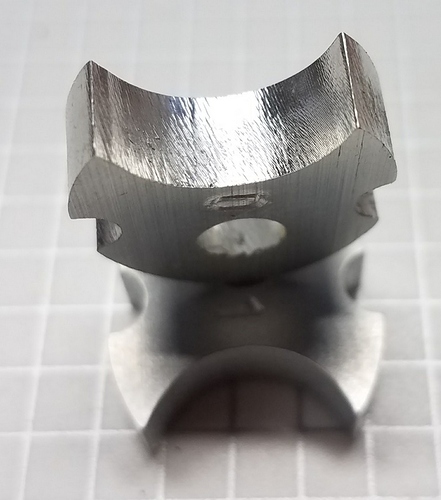 Here is a closer look 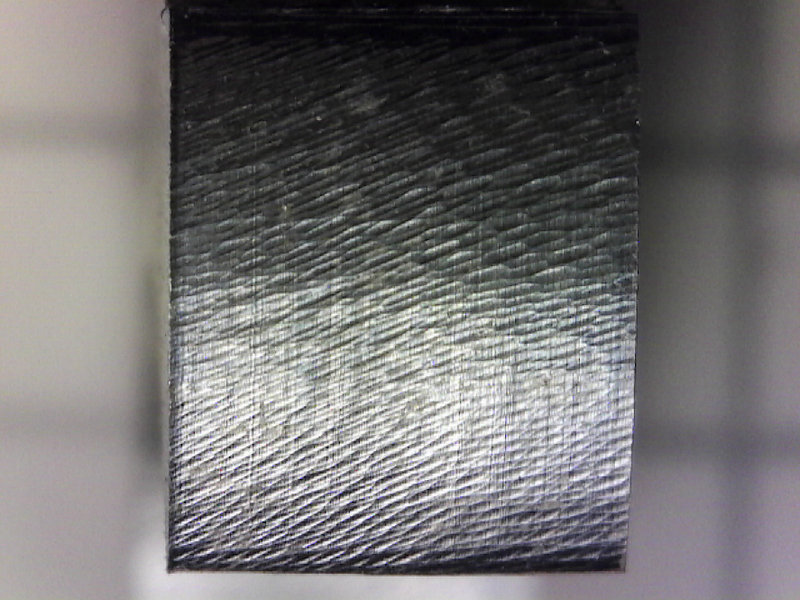 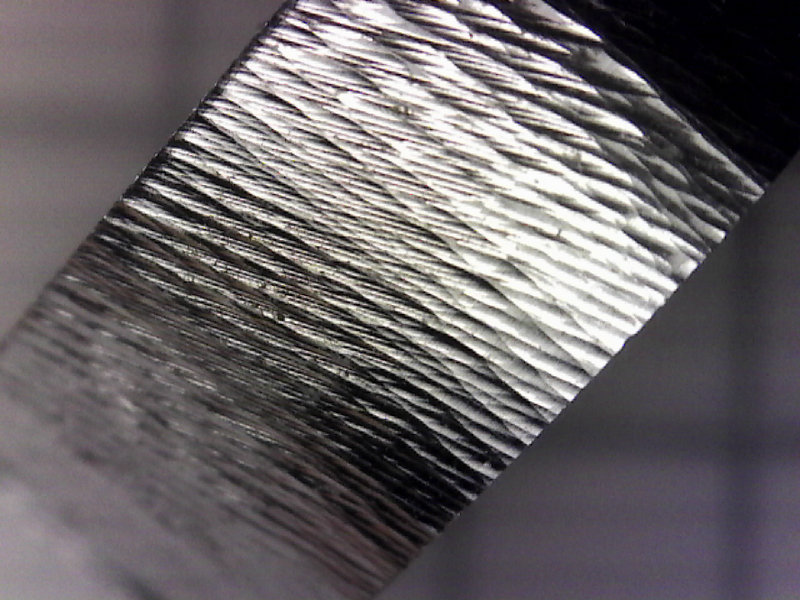 What I am working with:

Nothing seemed to make a difference.

Adjustments made to machine:

If this is as good as it gets than I can make it work. But if I can do better I would like to.

Finish passes climb or not?

Climbing cuts. I edited the original post to include that.

I’m no aluminum milling expert, but are you removing enough material at those amounts and feeds, or are you just rubbing? Does the final pass actually improve the finish quality?

Am I cutting or rubbing?

Is the finishing pass improving anything?

What about conventional vs climbing cut?

1st, not the best coating to choose. Use HSS or a non “Al” coated end mill. It’s hard to find HSS for whatever reason. This clearly isn’t a super-cheapo end mill (I haven’t seen anything cheap that isn’t square or round). Did you look at the end mill under magnification? Anything stuck to it?
2nd, Slow the spindle down. Run it at minimum speed (1).
3rd, I get much better results at a much slower feed (~12ipm), with a very small DOC, like .005"
4th, Coated and uncoated single flute bits have worked really, really well for me a few times…right up until I break the “beak”. You might get better results with a 1/4" end mill instead of 1/8".

It’ll never be perfect. It’s a little hard to understand the scale of the marks - that doesn’t look like rubbing. It looks a bit like chatter in the zoomed out views (especially the end on view under “I was kind of hoping for better”).

What alloy is this? I’ve had a couple “unknown” alloys that looked a lot like this. 6061 machines pretty nicely.

I have found a wide range of recommendations on coatings on the web. GWizard listed this as a recommended coating for cutting Aluminum. (I could not find ZRN coating on a 2 flute endmill on ebay. I was able to find TiAlN.)

The coating seems to be working. After 11 widgets the bit looks new, nothing stuck to it anywhere.

To get the detail I am looking for I need to use a 1/8" end mill, that is why I am testing with this size.

After poking around a bit I discovered that GWizard uses RPM as an input, I thought it was a calculated recommendation. So I slowed it down to 17,000rpm.

Tried another run with a two 0.005" finishing passes at 10ipm followed by another pass around the part. Similar chatter pattern, but much less pronounced. If this was as good as it gets I would be pretty happy. 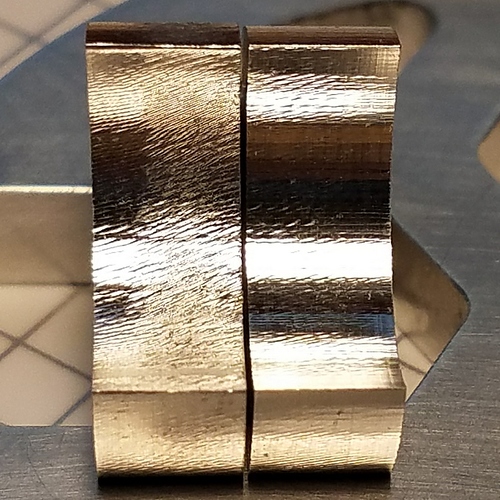 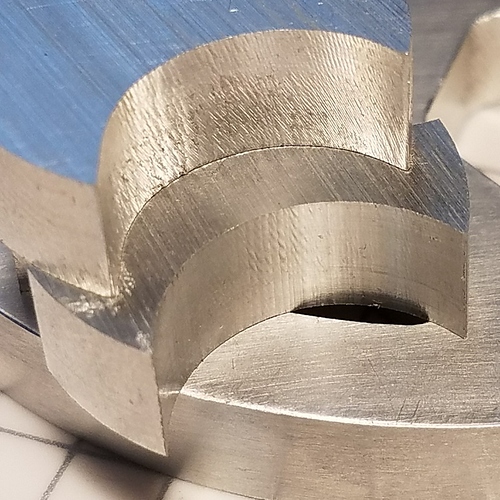 GWizard shows warnings that the chipload is too small and I am likely to rub when the feed rate drops below 7ipm. So it looks like I can go a bit slower.

Well, I’d say that actually looks pretty good. Touch it with some scotchbrite and it’ll look great.
I haven’t found any cheap ZRN bits on ebay, they tend to be a bit more expensive.

Good work, that looks like a substantial jump in finish quality.

Have you tried any cooling or lubrication? A little WD40 or a mist coolant system might work wonders.

Is the cut open on one side, or is it covered on both sides? Some chip evacuation may help if there is nowhere for chips to go.

I would also try to slow the spindle down. I got the best results at around 17,500 RPM, which is what is recomended on the wiki.

Try it with a ZrN coated 3-flute cutter and report back. Trust me. (Reason: Harmonics and Lubication in the primany friction zone) 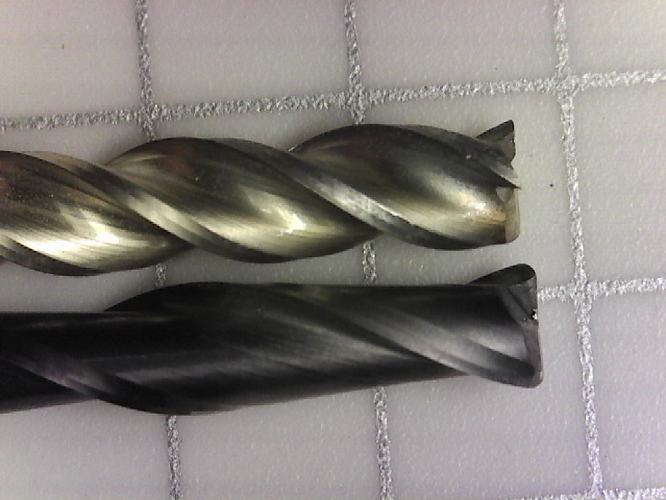 GWizard warns of tool rubbing when running slower than 11ipm, so I don’t think I was rubbing at 30ipm.

When the ZRN coated end mill finished the cut around the perimeter of the part I thought the part has shifted because it broke through and started cutting very roughly. I decided that the part has not shifted and ran the program again. Even though it was passing through areas that were already cut, it continued to remove material. It was as though it was not cutting cleanly the first pass. The cut quality is excellent, but the performance is unacceptable.

The ZRN is a $10 endmill from onlinecarbide.com and is USA made. Not the cheapest imported end mill made, but certainly the cheapest I could find on ebay.

To what do I attribute the improved cut quality?

To what do I attribute the poorer performance and heat buildup?

How are you clamping your parts?

Make sure you are using the shortest end mill that will work. The harmonics get much worse the longer the flutes are. I don’t machine aluminum much but I think I remember more than one person recommending single flute end mills for aluminum.

Check out Winston Moy’s YouTube videos. He recently posted one where he made some aluminum coasters for Elon Musk. I can’t remember if he used a Nomad or a SO3 for that project but they came out looking great.

most discussions along Alu milling is around F&S and not so much around the quality of the end mill…is makes a huge difference if you use a 5$ China Mill, or a mill from a well known supplier

High quality results will only be achieved with high quality end mills. Check out this post, maybe there is something similar available in the US (geometry which lowers the cutting force)

The mother off all mills for aluminium milling (Nomad) Nomad

Folks, I tested another high end mill and want to share the fantastic results. The geometry is specially designed to lower the cutting force and I gave it a try. I can do DOC of 3mm and stepover of 1,4mm without any chatter on the Nomad. Here are the facts Mill: Diameter: 3mm Shaft: 6mm Coating: DLC (Diamond Like Coating) Flutes: 3 F&S: 10000 rpm 250mm/min stepover: 1,4 mm DOC: 3 mm Stickout: 30mm (incl. the 5mm shaft which does not hurt) Cooling: Low tech air cooling (Fish tank pu…

Picked up another end mill:

New bit had a similar issue toward the end of the cut where there was some sudden movement and it appeared the work piece had shifted or a stepper motor skipped a step. But when I let it finish all the cuts lined up and it looked fine. There was no shifting or skipping.

Cut quality is a shade better than the 3 flute ZRN mill but without the heat build up. 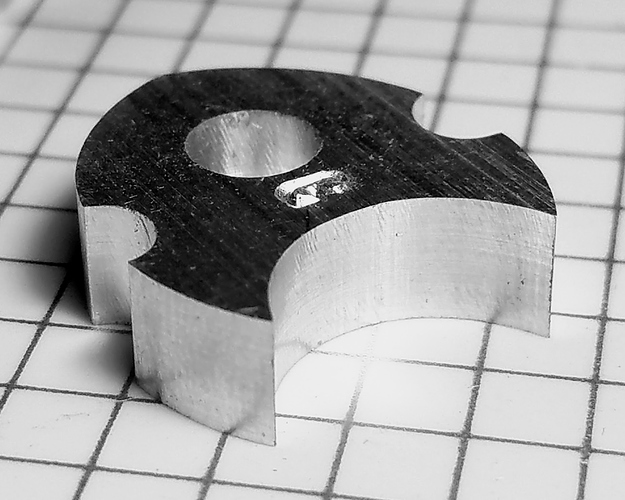 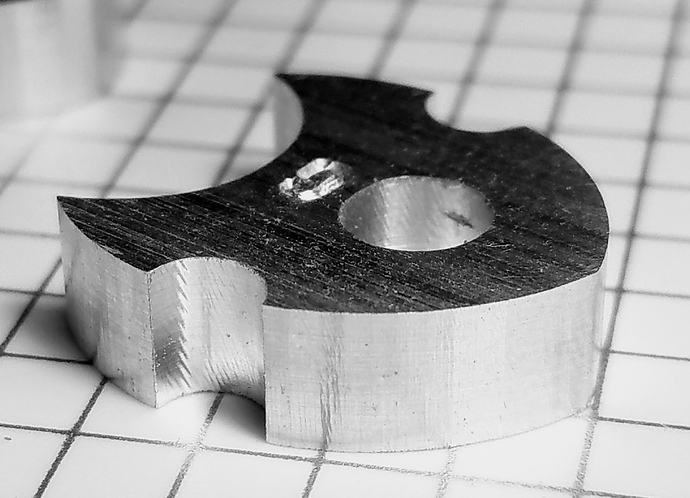 Question and a statement:

Do you have the new Z motor plate or the OLD style?

Link to the new one:

A Review of the New Shapeoko - Z-Axis Plate How To

As you may know, I am a BIG fan of cutting metal on my Shapeoko 3, but almost immediately after receiving my S3 (October 2015), I realized that the Z Axis plate was not going to be able to take the stress of cutting metal greater then about 0.010" deep. In fact, traveling along the Y Axis, my machine develop a harmonic pogo effect causing the spindle to jump nearly a 16th of an inch, and then destroy the end mill. Unfortunately there didn't appear to be any off-the-shelf option to fix this pr…

Cheap end mills (usually) perform poorly, regardless of the coating.

i have the new Z motor plate.

What kind of step over are you using? I have cut a lot of .25 alum with near flawless finish. On the last pass (finish pass) I decrease the step over to a very small number. What has also helped me is a series of bits I bought from Tools Today specifically for maching alum. They’re single flute bits:
shank Depth Tip Dia Flutes Leng
1/4 5/8 1/4 Up-Cut 1 2 Amana Tool 51402

When I’m done with the final pass, the finish is outstanding. If I need a polished finish, I use 800 wet/dry with some water or WD40 and then buff out. Beautiful polished finish.

Another aluminum-specific endmill recommendation was:

I believe they’ve all been recorded at: https://www.shapeoko.com/wiki/index.php/Endmills#Aluminum